Nuwa make wrappers for all functions being freeze points. All these wrappers are in BionicGlue.cpp. We use --wrap arguments to make GNU LD redirect all function calls of freeze points to respective wrappers. In most time, these wrapper will call respective back functions. For example, the wrapper of pthread_mutex_lock() will call pthread_mutex_lock() to do the task. These wrappers will be blocked on a lock, sThreadFreezeLock, for freezing the calling thread once Nuwa process run into a stable state. We say Nuwa process is frozen if all threads are blocked at these wrappers.

is called to assign a stack for a thread created with the given attributes.

The context of a thread is comprised by registers and a stack. The registers are saved and restored by calling setjmp() and longjmp(). setjmp() is called at freeze point just before freezing the thread. longjmp() is called just at beginning of the new thread. Nuwa passes a special start routine for calling pthread_create(). The routine will call longjmp() ASAP to parasite the context of frozen thread on the new thread.

Thread local storage, aka TLS, is a part of a thread. TLS provides a separated storage for each thread, the data stored in TLS are accessed through a key. Nuwa process will remember all keys ever been used, and read and remember the associated data just before freeze point for every thread, then restore them at parasited threads. See

The thread ID of parasited threads are different from frozen threads. So, Nuwa make a wrapper for pthread_self() to map thread ID of parasited threads to thread IDs of frozen threads. Some code use Linux depend gettid() syscall, I don't see any reason why people use gettid instead of pthread_self() for most situation. So, change the code using gettid() to call pthread_self() instead. Even more worse, some code call syscall() to invoke gettid. A wrapper of syscall() affects a lot of code, studying more is required before making a decision.

Binder is a special feature of Android, it does not follow the paradigm of UN*X/Linux. ...

IPC of Gecko/B2G is comprised by various protocols. The peers of a protocol instance are represented by a pair of actors; For example PBlobParent and PBlobChild are base classes of PBlob actors of parent and child side respective. PBlob* are generated by the IPDL code generator. Nuwa does not do any special for child actors for parasite processes since a new memory space are created and COW. But, for parent actors in the parent process, Nuwa should clone them and replace their IPC channels with new ones. Nuwa process will create new socket pairs for actors as the IPC channel between the new parasite process and the parent process. 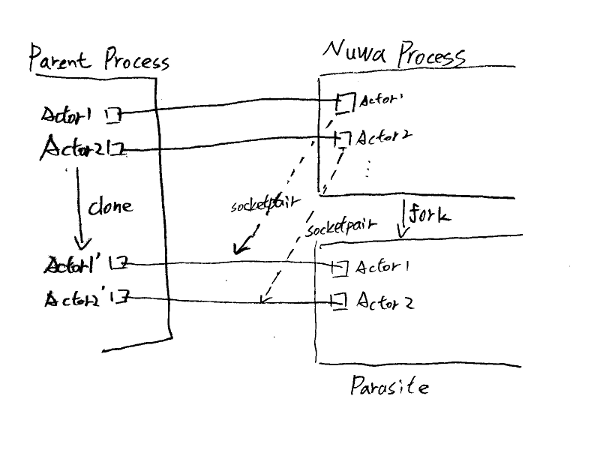 For running IPC between Nuwa process and the parent process, the IO thread and the main thread should not be frozen. For the main thread, no any special should be done, it just continue the control flow after fork. But, for the IO thread, it should create a parasite point just before the fork to tell Nuwa where to restart the thread. See

With Nuwa, static data could be shared among content processes with just one copy and copy-on-write. If you think some deserve to be shared, you should load it at the Nuwa process before being frozen. PreloadSlowThings() is a good place to load/or initialize the data. Please check dom/ipc/preload.js of m-c.

Preloading in B2G is a mechanism that loads assets and modules prior to opening an app to improve the app loading time. Preloading in Nuwa can leverage Nuwa's copy-on-write advantage to minimize memory space occupied by preloaded data shared accross process. However, there are 2 reasons that make preloading not be able to run in Nuwa.

To address the first issue, a method of determining whether the task are all done or not has been proposed. The idea is that we monitor each thread in chrome process, and see if there's a moment that all of the threads are idle. Since we are not accessing network during boot, having all of the threads idle means all of the tasks previously generated are consumed, and Nuwa can freeze. The second issue is addressed by splitting preload.js into 2 parts. The first part is where to put modules that are good to be loaded in Nuwa, while the second part contains modules that are not suitable to be loaded in Nuwa and scripts that rebuild communication channels. See