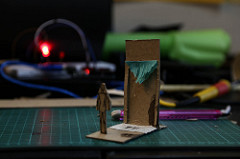 Exploring the Internet of Things
In an open, distributed studio
that cares about privacy, inclusion and literacy in connected spaces

This wiki page is a open, living document, so please add your ideas and see also our Github Issue Tracker.

Tomorrow’s Internet is going to be everywhere. Connectivity will be embedded in your transportation, your home, your places of learning and work, your clothing and probably even in your skin. It is estimated that by 2020, 41 billion devices will be online, driven by an Internet of Things (IoT) market worth $7.1 trillion.

The Internet is a global, public resource that should be open and accessible to all. As the Internet evolves, it must remain a public resource. It will also offer opportunity for creativity and innovation beyond the screens of our computers and phones.

The rules aren’t yet written. We believe strongly that everyone should be able to read, write and participate in their connected environments on their terms. What is needed to ensure the future Internet is open and accessible to all?

With a proud history of protecting and contributing to the Internet, Mozilla invites you to engage in these questions with us.

To explore these questions through action, the Mozilla Foundation is cultivating a professional learning community who can shape the Internet of Things with Mozilla’s values in the decade to come.

Below is a growing list of individual and organizational collaborators.

Create tangible expressions of how things could be, should be and shouldn’t be for IoT. The prototypes will provide the “collaborative substrate” that supports community leaders in learning and making together, while putting our values into action. The prototypes will be grounded in user research and user testing.

See all the prototypes on Github

To add to Github

Gather smart, interdisciplinary practitioners to prototype and innovate with open values. Building prototypes is better, faster, and more impactful when people are together. We want to invite new partners to take action with us–designers, technologists, activists, educators and more–as well as collaborate with Mozillians such as the Connected Devices team, Participation team, and others in the Mozilla Leadership Network.

At the National Institute of Design in Ahmedabad, India from Feb 1–13 2016. Participants across disciplines of creative technology, design, art, urban planning kicked off projects and collaborations.

The Good Home project explores ideas for 21st century urban living. We are building a pop-up urban living unit for the 21st century. In an on-going series of installments it will explore what life for a technologically-savvy household could look like while they are (and sometimes aren’t) at home in the near future. We will showcase how flexible living interacts with the limitations of diminishing household budgets, limited global resources, evolving concepts of privacy, the sharing economy, and global migration.

As part of Mozilla’s exploration of the Internet of Things, we’ll convene leading practitioners from Friday, April 22 - Monday, 25, 2016 to respond to clear design scenarios about how users can understand and control personal data in the connected home. The Berlin design sprint is about making prototypes. Before arriving in Berlin, participants will be given insights based on user research and expert interviews and generate ideas in collaboration with other participants. The time spent in Berlin will be honing these ideas by implementing them in objects and experiences.

The goal will be to have several working prototypes that reflect the design scenarios and deepened understanding of what it’s like to build experiences based on user research.

Hosted by Michelle Thorne and Jon Rogers at Fablab Berlin.

On June 10, 2016 in Amsterdam we’ll discuss what makes a desirable IoT for consumers, citizens, but is equally an arena to do business. How should we think about privacy? What is the user experience for consent? And how do we create a smart city that works for everybody?

Expect a Salon where we will discuss ethics in a pragmatic manner, where we learn from each other and foremost work towards a more responsible way to create IoT products.

This Salon is hosted by the Just Things Foundation.

As part of Mozilla’s exploration of the Internet of Things, we’ll convene leading practitioners in Anstruther, Scotland from Monday, June 20 - Friday, June 25, 2016 to respond to a clear design brief about how communities can be empowered collectively by using IoT and open practices.

The Scottish design sprint is about actively involving communities to explore IoT and make technology alongside them so it fits their lives. A key output will be a collection of ethnographic community publications that exemplify a new way of open source ethnographic design research practice. These will consider privacy, community consent and control, scalability of in-depth research studies, dynamic ethics (how do permissions change over time?) and how can we share research outputs in a useful and shareable, responsible way.

Hosted by Hive Chattanooga and The Company Lab.

Hosted by the V&A.

Foster partnerships and funding opportunities to grow and sustain the initiative. Insights can be shared that inform future Mozilla efforts. We will leverage and contribute to the larger Mozilla network and document processes in the open so others can learn from and participate in them.

User Control in the Connected Home

Contact us by email at iot @ mozillafoundation . org or in our Github issue tracker. Say hi on Slack and Twitter by pinging Michelle Thorne (@thornet) and Jon Rogers (@ileddigital).