DRAFT
The content of this page is a work in progress intended for review.

Ask questions or make suggestions in the discussion
or add your suggestions directly to this page.

This wiki page contains the part of the original PostCrash goal that was decided not going to happen in Q3.

Secondary goals (not essential for this project) 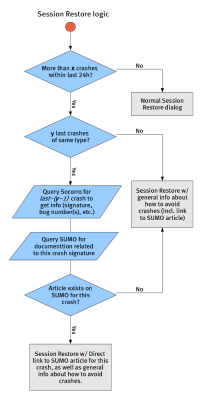 We want to make sure that more users are exposed to the already existing troubleshooting info about specific crashes, as well as general tips and advice on how to minimize crashes by keeping plugins up to date, etc.

A good opportunity to do that is just after Firefox resumes from a crash. The Session Restore dialog should check if Firefox has crashed more than x (e.g. 3) times in the last 24 hours. If so, it should at the very least display general tips/advice for avoiding crashes, but it should also query Socorro/SUMO to see if there is specific support available for the crash and show that as well.

The flowchart to the right illustrates the desired logic.

On the SUMO side, there would be specific articles for known crash signatures (this is already the case for many crashes today), as well as a generic checklist guide for things a user should do to avoid crashes.

We want to make about:crashes more useful. Ideally, for each crash we would display:

The client should obtain the extra information from Socorro and SUMO via XHR. This data should be stored locally once final. Final data includes:

Data that should be polled each time about:crashes is loaded includes:

In order to minimize load on Socorro and SUMO, we will by default only show an expanded view for the most recent crash. Users may individually expand other crashes (something like "check crash status" on each previous crash). 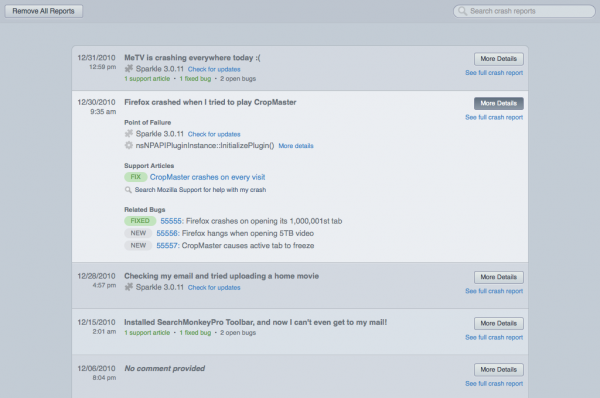