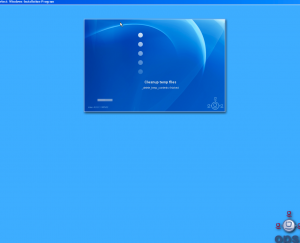 Before Windows logs in the OPSI installation happens

Install OPSI on a client

We need to flip a few options in Windows to enable certain packages to install without prompting.

Once OPSI is finished installing it will forcibly reboot the system. In a few minutes it should come back up and the client should be listed in the OPSI GUI.

We require Autoit to deploy many packages. To install it, do the following:

Using/writing OPSI in a nutshell

Installing a package on a client

There are different things you can do depending of what type wInst target you are writing for:

Parts of the package

An OPSI package is built from a directory with a specific layout and set of files. These are kept in version control and should be reviewed before check in. The important files in the package are as follows:

To get the basic files/directories needed to start a new package you should do the following:

This document doesn't cover wInst syntax in detail, please refer to the wInst manual for that.

This is by far the easiest type of package to install. Almost all MSIs have a silent mode which you can invoke. For example, here is the installation script for Visual Studio 2005:

Installing a package without a silent install

A lot of packages don't offer silent install options. To work around this, we depend on a tool called Autoit. Autoit is a tool which automates mouse clicks and keyboard strokes. Here's how to create a package that uses Autoit:

The wInst language provides a nice built-in way to update registry keys as part of an installation. Rather than (or in addition to) calling out to an installer you can write registry keys in the installer. For example, here's how to update the system PATH to append "d:\mozilla-build\python25\scripts":

Testing the package on staging

On staging you want to test out the package first to make sure it installs correctly before it goes into production. To create a .opsi package and inform OPSI about it, do the following: (For staging):

If there are any issues and you need to regenerate the package you can simply drop in the new code and run the above again.

Installing the package file on production

Please note that you should NOT install packages onto the production OPSI server unless they have been properly reviewed and checked in. That means your package should be landed in opsi-package-sources (hg), and you should land any binaries in opsi-binaries as cltbld@staging-opsi (CVS).

Your package should now show up in the OPSI Config Editor. Make sure to set staging slaves to install/update the package as well as production ones.

I've seen before XP slaves not running the regenerate-hostkey.py service and require you to run it manually:

After rebooting you should be good to go

If your slave was to match any of these values then it means that you have the key for one of the ref machines and it has to be fixed:

Look at this code to understand the uniqueness of the value:

This is not needed anymore. Check with bhearsum for details.

NOTE: This instructions were build up from this page.

[really? it didn't happen to me - armenzg] OPSI forces reboot on completion of install and then you can manage it through the opsi client.

It translates to: Connecting to network drives, please wait a bit

It takes several minutes until it times out.

To fix it you have to add build.mozilla.org to the main DNS server as explained in here.

It is a blocking message in a "wInst-Message" pop up saying: "zugriffsverletzung bei adresse <memory address> in Modul 'winst32.exe'. Lesen von Adresse 0000000"

This error appears before logging in. I believe you can only stop "the installation" and be able to access the machine. 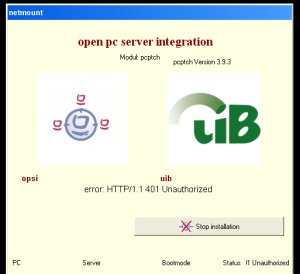 I assume we have to check the following:

NOTE: this has never been tested.

In bug 519989, we did some preliminary investigation into how we might go about updating the password used for mounting the OPSI shared package drive in case we happen to expose it: