Note: Since 2.2, we already increase FL period to 12 weeks. This graphic has to be updated.

A comparison of Firefox and Firefox OS trains: 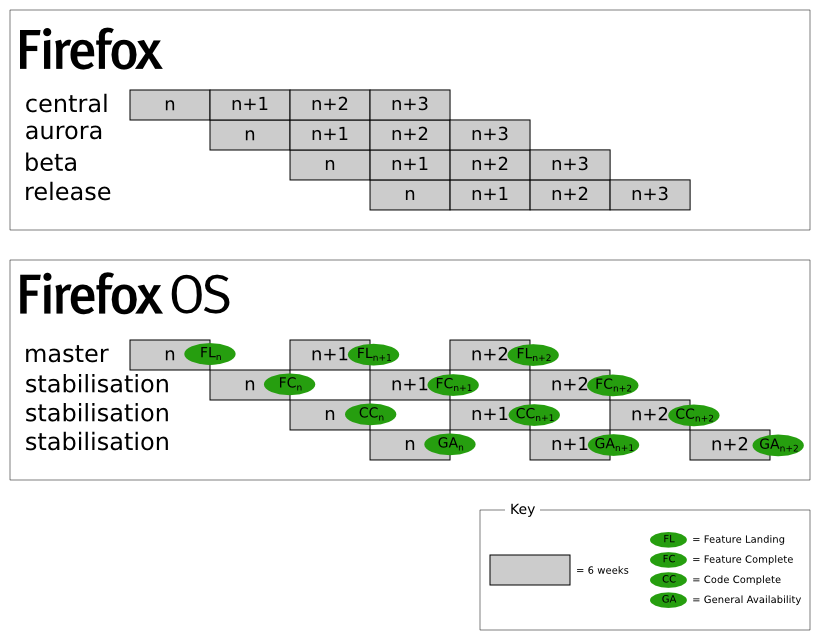 Feature Landing (FL) is a fixed milestone in the release schedule. All feature work must be complete by the FL date.

What if a feature misses the Feature Landing date?

What if I need to land string changes after FL?

The Feature Complete (FC) milestone marks the hard cut off date for all feature work related to the current release. In order to declare FC, QA must have completed a set level of testing. Declaring FC indicates the build is ready for chipset vendors to start chipset related testing. FC is a flexible milestone with a target date. FC will only be declared when all of the FC criteria have been met.

This Code Complete (CC) milestone marks the completion of the release from Mozilla and partner chipset vendors. This is our declaration that we are ready to ship. After this milestone no further Mozilla or chipset vendor specific changes will be accepted. At this point all Mozilla wanted blockers should be resolved leading us to zero blockers. This drop dead date indicates that we are ready to declare a Release Candidate (RC) and Original Equipment Manufacturers (OEM) / Original Device Manufacturers (ODM) can pick our release for their test cycle. The following criteria needs to be met.

note: The GA piece is still being worked on with TAM's/partners and should get updated soon

A release is will be declared General Availability (GA) once the OEM/ODM has completed the IOT/certification testing and granted Terminal Acceptance (TA), which implies the build is good to hit silicon.

Note : In general, there can be agreed upon exceptions to the above and Release Management will communicate progress on each milestone on all mailing lists (internal, public, partners) effective 2.0