My initial idea is to create a new interface that registers itself as a service with XPCOM. This service will allow objects to register (and unregister if needed) themselves for synchronization push and pull operations. This interface will also provide at least a high-level path for wrapping up the data to sync in a sudo-email message or IMAP implementation.

The push operations would provide the object a new set of data (in a to-be-determined data structure) and leave the implementation details up to the object.

The pull operation would request data (again in a to-be-determined structure) from the object into the synchronization service.

A new service will be introduced into the mailnews component, called nsIMsgRoamingService. This service will delegate notifications between the data classes and roaming update messages. There are two paths of data through the roaming service, as illustrated below: 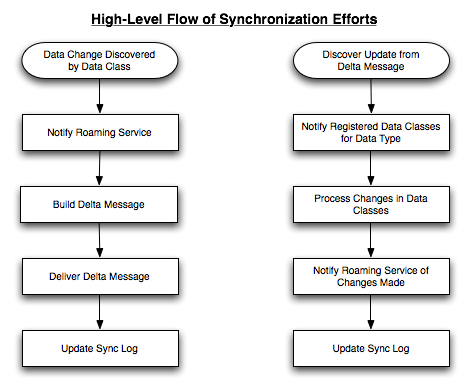 Note: A "data class" is a interface that controls anything that we want synced, like an |nsIMsgFolder|.

For containing and controlling the data between installations, update messages are used to package and transport the sync data. All sync information is packed into a file. There are two types of update messages:

Some of the sync data can be transferred as the full data file, like the address book's abook.mab file. However, certain data types like user preferences can not be sync'd this way, and contain an update log listed in the file. To help with unpacking all of the data, a TOC file is created and included with each update message. The format of the TOC file looks like this:

The delivery mechanism should anonymous from the details of the actual storage of the message, wether it be IMAP or POP3. The sync service should be able to pass down something like a file pointer to a temporary sync file. The advantage to storing the updates in an individual file is to keep away from the actual "live" data files, and perhaps create the ability to format the update file in a format of our choosing.

At this stage, we have not determined if the storage options in the delta messages, here are the options I have come up with so far:

The full sync message would contain a renamed zip archive (.zim or whatever) to help preserve with storage space. The message would also be marked not to delete on the server side.

To help preserve the integrity of the sync, a "sync-log" has been proposed to keep track of all of the changes that have been applied (and probably when they were applied).

Since shutting down and not syncing would probably suck for the average user, I have planned to add a pref that allows forced synchronization at shutdown. Either the user can build and save our build send the message depending on the pref.

For IMAP-synched sessions, a timer is probably not needed, as changes can be applied as new delta/update messages are posted. The same philosophy can be applied to the POP3 setting, applying sync changes based on the biff-update interval.

To help keep things centralized, I'm keeping track of things I need to work on here. Any suggestions made by others will be listed here as well.

Below contains notes for potential hooks for notifying an interface (service possibly) that an object has changed and needs to be synced. These locations might also be ideal for points of entry where the notifying interface could inform the object of changes from an external source.

|nsMsgMailViewList| seems like the best place from just poking around. I could just set some sinks in that class for when methods like |AddMailView()| and |RemoveMailView()| are called.