From MozillaWiki
Jump to: navigation, search
Please use "Edit with form" above to edit this page.

1. Microsoft will be the only provider of Metro apps. Getting it through is going to be a problem.

2. Running an E-mail client with the suspend system is going to cause some annoyances to the users and developers.

3. How is a calendar going to be included? The calendar team will need to be brought in on this.

Windows 8 will have 2 application environments: classic and metro. Thunderbird only has a classic version. Comments about metro aside, Thunderbird will need a metro version in order to compete with Microsoft's proprietary clients, and to work on WOA. The goal of this feature is to port Thunderbird to the Metro environment, while continuing to use Mozilla's technologies.

The target users in this case are Windows 8 users who would prefer a Metro version of Thunderbird, and WOA users who have no alternative.

This feature may require some or all of the Gecko, Necko, scripting engines, etc. to be somewhat modified. These should be reusable from Firefox metro.

Hard to define. Ideally, as many features from mainline Thunderbird as possible. However, if required, the following features can be skipped: search features, chat, big files.

All of the windowed components for Thunderbird will need to be moved to the tab infrastructure for Metro, but should remain as preferred in classic. We will also need to figure out how to work with the suspend system. While support for Add-ons should be included by default, inter-compatibility with Thunderbird Classic add-ons may not be viable. Naturally, we will need a version of lightning or an equivalent for this.

Due to the system framework, having synchronization between classic and metro Thunderbird.

Due to the lack of a windowing system, many things that are currently windows will probably have to be moved to tabs in Thunderbird Metro, such as the message editor, contact manager, reminder system, and a bunch of other pages. As a result, Thunderbird Metro will use the tab infrastructure a lot more. This may require porting over "tab groups" from Firefox. It would also require certain "On hold" features to be completed.

Thunderbird Metro will need to be just as customizable as classic; but this will need to have various components released over different cycles. 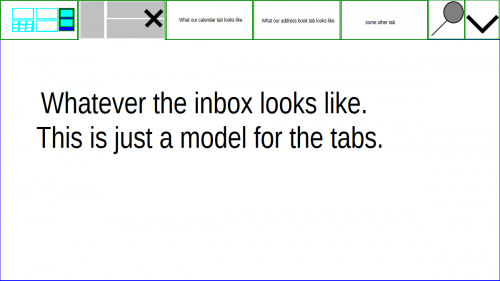 The current plan is to use thumbnail tabs at 0.75 inches of height. This won't waste too much screen space and will be easy to use for both touch and standard users. 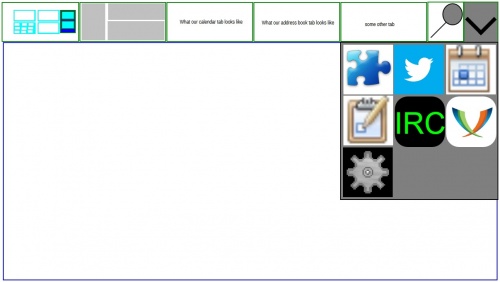 The launchers, such as the calendar and task list, will be under a "launchers" menu. 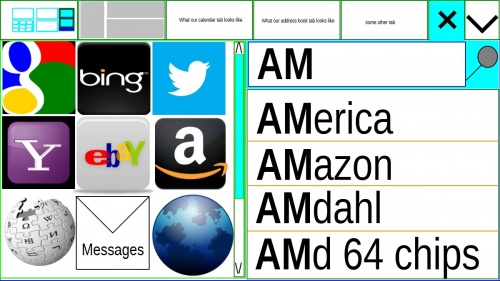 when the search icon is pressed

The search icon will be equal to the launchers icon, at 0.75 inches by 0.75 inches. When active, it becomes a "close" button, with a "search board" up. There should be a suggested searches menu, and a touch-screen friendly mechanism for choosing which search engine, messages, or use all searches feature someone wants. When the user has the text entered/ selected, and they either select a search engine or just hit enter to go to their default, the search board will go away and open a new tab with the query results.

The calendar project should figure out how to set up their internal components.

The toolbar buttons should be comparable to now, but with larger icons so they're easier to use on touch screens.

" contains strip markers and therefore it cannot be parsed sufficiently.