Every time a user opens up a new tab in Firefox, the browser displays a number of boxes, or Tiles. Frequent Firefox users see screenshots of the websites they visit most often in their Tiles. What appears in Tiles is currently based on “frecency” (an algorithm that combines your recency of visiting a site and your frequency of visiting a site). Sites that have been visited with the most recency and frequency appear in a user’s Tile.

Default tiles and Enhanced tiles have been running for all current versions of Firefox and pre-release versions where Enhanced tiles are only visible to users who would have seen a history tile for that site in the new tab page. Suggested tiles are available to en-US Firefox 38 users and all Firefox 39 users where suggestions are shown if the user's top sites match a list of sites.

NOTE: Information about the progress and plans for Tiles can be found in the Content services page.

History Tiles are chosen based on the most-visited sites for a user. Only one tile from each domain is shown. 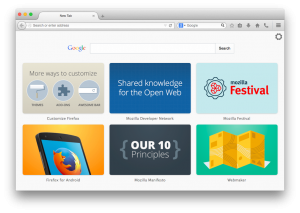 New users to Firefox are given a set of tiles, default tiles, as suggestions for sites of interest until they generate their own history tiles based off their browsing experience. The list of default tiles given to new users is built from popular tiles and other tiles Mozilla chooses.

Firefox periodically downloads a list of tiles to use as default tiles, based on basic information such as the user locale and geographic location (determined by IP address). As the user gains browsing history, the default tiles will be mixed and replaced by History Tiles. Feature bug and dependent code changes

For users with certain top sites in their new tab page, Firefox may suggest a new tile for users to visit. The suggestion will explain why it's being shown, e.g., "Suggested for wiki.mozilla.org visitors." These suggestions will only be shown a fixed number of times before they're automatically removed. Feature bug and dependent code changes

For users with existing tiles (history tiles) in their new tab page, Firefox may substitute a better image for the screenshot generated by default. The enhanced tile would not be displayed to a user unless that website would already have appeared on their new tab page, based on their browsing history. The improved image is supplied by the site or partner and can include a logo plus a rollover image. Feature bug and dependent code changes

How to control Tiles?

Mozilla has support pages if you're looking to customize the new tab page, as well as a page that explains how tiles work.