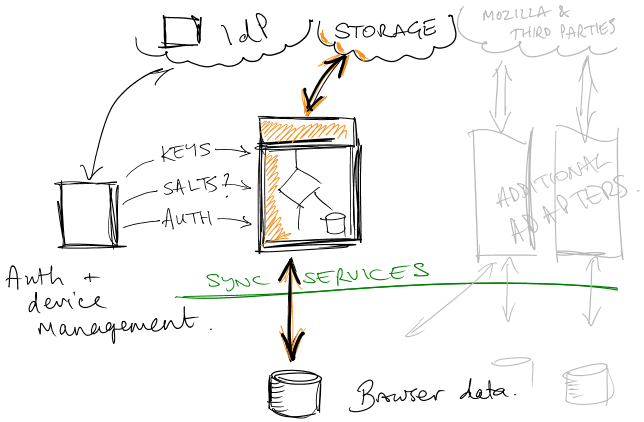 This document attempts to outline one approach for tackling the middle part of the above sketch via a storage protocol and scheme for exchanging structured and semi-structured data. Building alongside a working account system and existing profile storage, we define a storage concept that addresses many of the fundamental flaws in the existing Sync design, and also looks ahead to known future requirements.

We assume the existence of an account system that can control access to storage, as well as providing three things:

Additionally, we need a source of salts for hashing. This can be the client itself or one of the services.

We take as our starting point the non-functional requirements at <https://services.etherpad.mozilla.org/2019>:

And add some obvious ones:

A record is an atomic unit: a bookmark, for example. A record has public fields (GUID, hash, collection) and private content. A value-identical record -- one with the same content -- has the same hash.

A tree is a unit of structure, either explicit (a bookmark structure) or implicit (a collection of history records). All records are tied to a collection root by a structure of trees. The root of a collection is called a ref.

Trees refer to records by hash. Trees can be hashed -- their content is the structure.

Two clients with the same records and structure will have the same root hash.

All hashes are salted, which prevents record identification attacks.

When a client has a change to upload, it:

This seems expensive -- why not identify items in the structure by GUID, which would minimize the number of structural updates? The answer is that doing so provides no mechanism for rooting, managing, and tracking changes. If the same exact tree could identify two states, then another mechanism would have to be introduced to track and consolidate each client's changes -- a transaction, essentially.

Each time a change is uploaded, it is tagged with a generation.

Each time the root is updated, the new root is accorded a new generation, and a reference is recorded to the previous root.

If the current root has changed out from under the uploading client, the update fails, and the client must reconcile and retry.

Trees refer to their earliest subtree generation. This is used for garbage collection by clustering records; once the current tree doesn't refer back to an old generation, the old generation can be completely discarded.

When a client requests new changes, it walks from its last known change to the current root, fetching altered trees, fetching altered records, constituting a new state locally, and then making the appropriate local changes. When it's done, it tracks the new ref.

In order to facilitate GC, clients could inform the server of their current state; that way, the server knows how far back changes need to be kept to support offline clients. This is optional.

Of course, the current tree includes all current state, and pointers back to all trees and records; that's all the server needs to keep. But the more history we replay, the more likely it is that accurate conflict resolution is possible.

We can avoid uploading whole records. Instead, upload a change: a reference to the previous content hash, and the changes. This reduces the amount of data uploaded for larger records, and is very efficient for clients that are able to track closely against each other. It's less efficient in other ways: it requires clients to process the entire change sequence to reach the current state, it removes the ability for clients to recognize identical records by their hash (because the object in this case is a change, not an object), and it leaves a trail of garbage.

But what if we identify changes by their entire object hash -- just as if we uploaded the whole object, but with the contents replaced by a delta? That buys us all of the collision benefits, while still bearing the costs of chaining.

Remember that records are marked with their GUID. A per-object change tree can be easily retrieved by cross-reference. For non-incremental storage, this will consist of whole records, and can be limited to the most recent generations (subject to some complexity in the case of parallel timelines). For incremental storage this will be essentially a transaction log. This will be more costly for clients to process than in Sync 1.1, but does offer an advantage: the ability to use this in-place history to reconcile local changes more accurately than "here's the server record" allows.

To accurately compute the current state of any record involves examining the current tree, unless clients request a generation bump for dependent records on ref update.

Note that trees don't strictly need to be encrypted; they reveal some opaque structure. That would allow the server to do a large amount of this work, rather than the client; for example, the server could traverse the current tree to find the latest version of an object.

Ref
an identifier which refers to a particular object via content hash.
Object
a blob of JSON with an encrypted part ("body") and a public part ("envelope").
Record
a kind of object whose body refers to a domain entity.
Tree
a kind of object whose body is a structured set of objects, identified either by ref or by hash.
Collection
a named ref in the global namespace. Collections are an enclosing scope.

How do we achieve the following goals:

without having to modify the entire chain of trees, right up to a single global root, when we modify a leaf?

The answer, I think, is to generalize the concept of a ref to be an entity that is referred to by name, not by value (content hash).

Each Places root could be considered a ref, and we can even go so far as to introduce folders by reference.

This opens the door to partial tree synchronization: clients are at liberty to synchronize any individual ref, without even considering the structure of the rest of the collection, let alone values.

So how do we model events like bookmark moves between roots? With care. This is analogous to a move across a filesystem boundary: it's a copy followed by a delete. We have several options:

And what about unsorted flat collections? With the assumptions of all items in a collection being named by reference, and the collection being flat, this approach is equivalent to the Sync 1.1 system, but with the ability for clients to manage the set of included items by explicit listing.

So what's the relationship between GUIDs and refs? Surely it makes sense for these to be the same, and for a record with a GUID to implicitly be made available by reference?

Yeah, probably. But there's a difficulty: what about two different records with the same GUID?

Reference counting would involve transactionally updating counts for all referenced objects when a ref revision is set or garbage collected. I think that rules it out, but it would allow for accuracy wrt whether a record is needed for a particular ref revision.

Strict generation collection is essentially equivalent to reference counting: all records reachable from each ref revision are numbered with that revision's version (where the version is a server 'clock'). To do so involves touching each of those objects for every ref set, which is also undesirable.

Lazy generation collection achieves an approximately time-based collection approach by decoupling record generations from ref revision generations: new records are given the generation of the forthcoming ref revision, or an auto-incrementing version number (which can be as granular as +1 per record), and trees refer to the lowest version of any of their children (which implies a bottom-up upload).

All objects with a version lower than the current ref revision's tree's minimum generation number can be automatically collected. The longer the stretch between the current and the oldest version, the more reusable objects stick around, but the greater the space usage.

Efficiency can be improved by bumping reused records' versions when trees are updated, which is like incremental marking.

Flaws in this approach