I'm Lan Glad, a member of the Mozilla Slovenia team. I'm the Locale Leader for SL on SUMO and occasionally help localize other projects (AMO, Mozilla.org...) to Slovenian language. 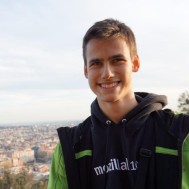 In summer 2013, I was looking up for some Firefox help on Mozilla Support, spotted some typos in help articles translations and signed up only to correct them. Then I learnt more about Mozilla and its mission (and, of course, that I can translate stuff as well) and became a localizer.

A year later, after the then Locale Leader Vito left Mozilla, I got that role. That was also when I joined the general Mozilla Slovenia team and met the rest of the members.

When I was invited to join the mailing list and asked for my real name for the first time, I was 14 years old. I remembered all that Internet safety advice ("Do not give your information to strangers!") and introduced myself as Marko Glad. When I met the other members, I instantly regretted it but didn't know how to explain... so I was known as Marko till March 2016, when I met the team in person and told them.  :)