This is the second main update of this page. To understand everything mentioned in this page, please read On Tagging.

I absolutely support Dria's suggestions On Tagging in Firefox, but sometimes I would want to add something to these ideas, sometimes, I would think, these ideas even go too far. Therefore I will now do some remarks to Dria's post here.

I suggest that we should distinguish between Tags (= the "category") and what was till now called bookmarks (Dria is absolutely right, the internet is not a book), I will just call them tagmarks (perhaps not a good word make-up) in the following.

I like Dria's icon (green is a good colour (still unused for icons), and it has an analogy to the letter T for Tag), but Firefox is a more or less internationalised browser and not everyone in this world will be able to understand T. I propose, to use a symbol like

which already has a connexion to tags, though it suggest that these are HTML tags. 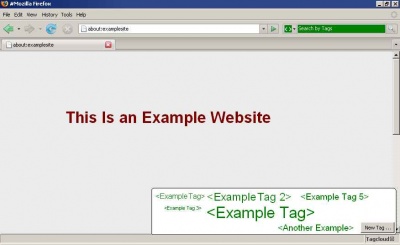 This is just a how-it-could-look illustration. (And by the way: could anyone tell me how I can make a thumb from this picture? Feel free to edit the page therefore and remove this remark, then.)

I will now explain the elements of this image:

This is another Tagcloud example, this time looking more realistic, and it's including a yellow marked area for Suggested Tags (looking a little like the notification bars popping up, when extensions can't get installed or a phishing site was detected). A bayesian behaviour-analysing feature for tagging, in my opinion, would be really handy and when this system suggests tags, these tags could in the tagcloud be printed just like that. I also have used buttons to scroll between the tags, if they get too many; a scroll bar might have looked odd in between the close button and the Enter New Tag field (which now isn't any more connected to a dialogue box).

I think the bayesian system should not suggest more than three tags, because then probability sinks that the user really wants all those tags for his page and the space in the yellow bar is also limited.

This is some kind of what the results page of the tag search could look like. It would sort the links by how often they were viewed (it may be possible to also include Google's page rank into the ranking calculation, however, I don't think Mozilla should rely too much on Google). When I thought again about the necessity of a manager window for the tagmarks, I got to the idea that it would be sufficient to use a sidebar, which would simply display all existing tags and make an HTML page pop up in the main browser window, when you click on it. This HTML page should contain a few managing functions, i. e. Delete / Rename Tagmark, Add New Tag (aka Attach Tag), Detach Tag (aka Unapply Tag, this would be used for removing a tag from a tagmark). Users also might want to order the tagmarks by their relevance, so there should be an ability to drag the results on the desired position (I saw this only lately on a Google-sponsored testing search interface I can't remember the name of). You might also be able to drag the links to the Tag Sidebar (font size of the "touched" tag increases to 10 pt) or the Tagcloud to attach a new tag to it.