Mozilla is going big in learning and digital literacy. 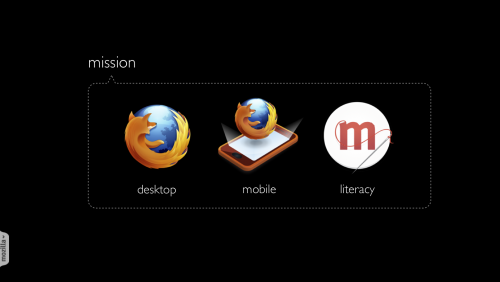 Leading the web through making and learning

Mozilla is building a global movement for digital literacy and webmaking. In the UK and around the world. (MORE TO COME)

A free and open framework for 21st century skills

Please attach or add links for if you have for:

announcing the 2013 Fellows, with the New York Times, BBC, Guardian and more

The eight 2013 fellows will be at the Festival, and all the participating news partners will have representatives there as well.
The 2012 OpenNews fellows will be at the Festival as well, facilitating sessions, exhibiting at the Science Fair, and participating throughout the festival. Their host news partners (such as the Guardian, BBC, Al Jazeera) will also participate & facilitate sessions.
QUESTION: Are we also making any announcements around "Source," our new portal for sharing OpenNews source code and software created by the project?

Please attach or add links for if you have for:

(coming from Dan Sinker) Photo of last year's Fellows being announced at the Festival: http://www.flickr.com/photos/mozillaeu/6312788272/in/faves-mozilladrumbeat/
Gallery of 2012 fellows: http://mozillaopennews.org/fellowships/2011meet.html

Examples of what the 2012 fellows have been working on: http://mozillaopennews.org/code.html What are we announcing / showing at MozFest when?
Why hackable games?
CALLS TO ACTION

Please attach or add links for if you have for:<link http://www.mozilla.org/en-US/gameon/ >