Before this feature, when a user installs into the default Program Files directory, updates cannot be applied without us first prompting the user for elevated permissions with a User Account Control (UAC) dialog. 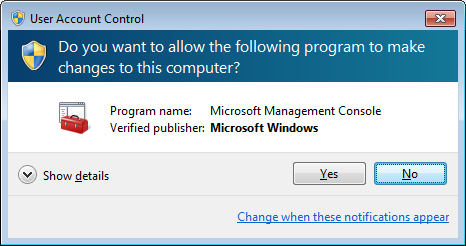 Now that this feature is implemented, Firefox uses a service to execute updates so that UAC prompts are not displayed. The service is run "on demand" and will remain stopped until it is needed. When the service is needed, it will be started again for the period of the update. If there are any problems updating through the service, it will fall back to updating the old way via the UAC prompt.

The bugzilla task related to creating a service and not prompting the user for UAC is in bug 481815.

Other details about the service:

To test and see if the service is installed, from a command prompt you can run:

If it is installed you will see output of:

If it is not installed, you will see output of:

How the service works

The service logs all operations of the last update, as well as taking a backup of the last 10 update operation logs before it. The install process and update processes are logged separately. The logs live in %programdata%\Mozilla\logs.

Since the service executes an update via updater.exe in session 0, no UI is displayed. An alternate implementation could have been to have the UI display by running updater.exe with a user token from the service instead, but to avoid permission problems on files, and inconsistencies in different OS versions and user types, the update is always run as session 0 with the SYSTEM account.

A single service and service versioning

The service was first built for Firefox, but has since been ported to Thunderbird. Only one service exists per computer across all channels. Other Mozilla products use the same service as well.

The service decides whether or not it is newer by looking at the updater file's version number in comparison to a new one being updated by application update or the installer. Only if the newer version number is greater will it be replaced. This means that if the user runs builds like Nightly, then the Nightly service would update all other channels. It will therefore always be backwards compatible.

A service operation is executed by starting the service with special command line parameters.

The command line parameters are as follows:

The "software-update" command specific command line arguments are as follows:

Applying an application update from the service's perspective

When the service fails

Service as an optional component

The service can be uninstalled separately; it shows up as a new item under add/remove programs.

You can also control whether the installer installs the service using a configuration ini method provided by the installer.

Verifying the updater is our own binary

To ensure we execute our own binary, we verify the signature of updater.exe to make sure it is signed by us.

Another bug which is not part of this feature moves updates away from on startup, and performs them to an alternate directory in the background. This work was implemented in Bug 307181.

A configuration INI setting can be used to optionally default the service installation off. This is useful for silent installs. https://wiki.mozilla.org/Installer:Command_Line_Arguments

Below I describe some important things that we tested. All of the usual update tests and more were also tested.