Accessibility for Web audio & video is an interesting beast. It is mainly referred as a need of extending content with functionality to allow people of varying disabilities (in particular deaf / blind) access to Web content.

However, such functionalities are not only usable by disabled people - they become quickly very useful to people that are not generally regarded as "disabled", e.g. subtitles for internationalisation or in loud environments, or the "mis"-use of captions for deep search and direct access to subparts of a video. (See for example the use cases at WHATWG wiki).

Mojito is an example of a video player with such functionality.

As an alternative to embedding some of this information into Ogg files, it is possible to keep them in a separate file and just refer to them as related to the a/v file. This is a problem to solve outside the Ogg format. 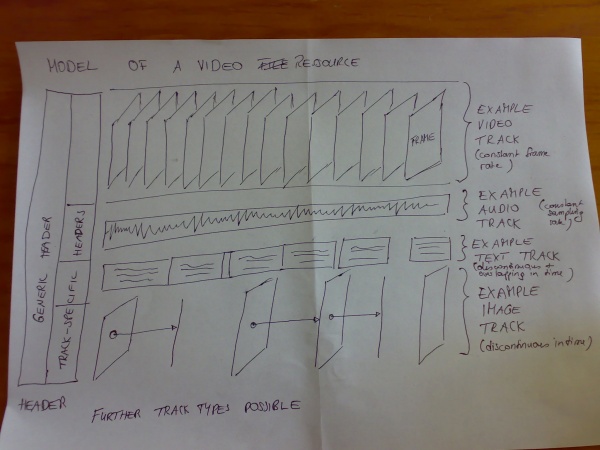 The description of how to include a certain data type into Ogg is generally straight-forward from its description and is therefore included below as a suggestion.

The advantages of including timed text data inside Ogg are:

Hearing-impaired people need a visual or haptic replacement for the auditive content of an audio or video file.

The following channels are available to replace the auditive content of an audio or video file:

The following are actual technologies that can provide such channels for audio & video files:

MULTIPLEX INTO OGG: not necessary, since it is part of the video track

move it to where it doesn't interfere with viewing, add font style with no need for player support, etc)

MULTIPLEX INTO OGG: probably as extra timed bitmap track(s) (or extra video track) - the OggMNG and OggKate codecs will provide for this need

MULTIPLEX INTO OGG: as extra video tracks, one per sign-language - a specification on how these tracks should be presented (e.g. PIP) and what language they represent should go into the message header fields of the skeleton track

Visually impaired people need a replacement of the image content of a video to allow them to follow the display of a video or any other image-based content (e.g. an image track with slides).

The following channels are available to replace the visual content of an audio or video file:

The following are actual technologies that can provide such channels for audio & video files:

MULTIPLEX INTO OGG: as extra audio track with editing of breaks into original a/v file (preferrably Speex encoded, since it's a pure speech track)

MULTIPLEX INTO OGG: as extra audio tracks (could be speex, if the sound background is being kept in a separate file and both are played back at the same time) - there needs to be a specification in the skeleton track about which language it represents and that it replaces the main audio track if selected

1) The general expectation is that the DOM tree is the parse tree of one HTTP resource--that is, there's one Document object per HTTP resource.

2) For security reasons, allowing a video file cause node insertion into an HTML DOM tree seems like a potentially dangerous thing.

Access to structure of video / audio from Web page

Here is an example of two services that have solved the display challenge. 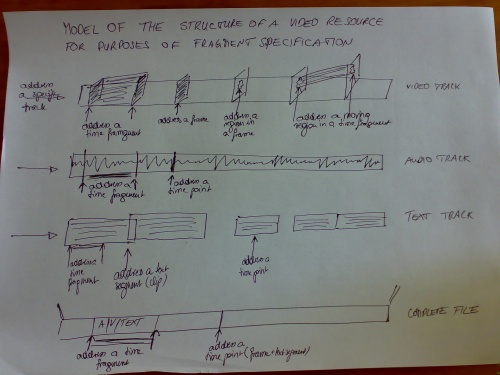 Hyperlinking out of audio / video

A text codec as is required for the specification of captions, subtitles, textual audio description, annotations requires some textual markup language for authoring. A few opinions on the choice of markup language are floating around which are captured here.