finding bugs to work on

We have a fresh oranges dashboard which looks like neglected oranges, except that it shows new failures that are high frequency and ignoring [stockwell infra] bugs.

As these are new bugs, there will be issues here that are infra or harness related. Use this as an opportunity to annotate [stockwell infra] if it is build, taskcluster, network, machine related. Otherwise, rules are similar to disable-recommended: If a test case is in the bugzilla summary, we should be able to retrigger and find the patch which caused this to become so frequent.

Skip test-verify bugs: test-verify already repeats tests, and only runs tests which were modified on a push. There is no need to retrigger or backfill a test-verify failure.

choosing a config to test

It is best to look at the existing pattern of data you see when looking at all the starred instances. Typically when adding a comment to a bug while triaging it is normal to list the configurations that the failures are most frequent on. Usually pick the most frequency configuration, maybe if it is a tie for 2 choose both of those.

If there is not a clear winner, then consider a few factors which could help:

Ideally you want to pick the first instance of a failure and work backwards in time to find the root cause. In practice this can be confusing as we have multiple branches or sometimes different configs that fail at different times.

I would look at the first 10 failures and weigh:

In many cases you will pick a different failure as the first point- I often like to pick the second instance of the branch/config so I can confirm multiple revisions show the failure (show a pattern).

BEWARE - in many cases the first failure posted is not the earliest revision. Timestamps in orangefactor are based on when the job was completed, not when the revision was pushed. 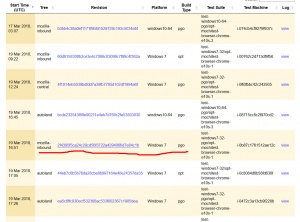 The above example shows that windows 7 opt/pgo is common- I am picking win7-pgo on mozilla-inbound as it is where the pattern seems to be the most frequent.

how to find which job to retrigger

Once you have the revision and config, now we need to figure out the job. Typically a test will fail in a specific job name which often is a chunk number. We have thousands of tests and run split across many jobs in chunks. These are dynamically balanced, which means that if a test is added or removed as part of a commit, the chunks will most likely rebalance and tests are often run in different chunks.

Picking the first job is easy- that is usually very obvious when choosing the config that you are running against and pulling up the revision to start with. for example, it might be linux64/debug mochitest-browser-chrome-e10s-3. 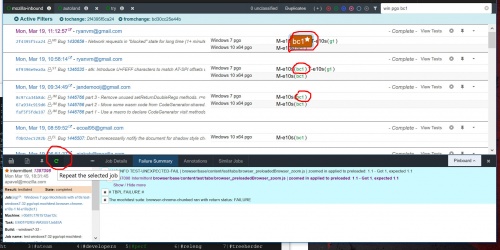 As a sanity check, I pull up the log file and search for the test name, it should show up as TEST-START, and then shortly after TEST-UNEXPECTED-FAIL.

When retriggering on previous revisions, you need to repeat this process to ensure that if you select chunk 3 that the test exists, it is likely that the test could be in a different chunk number.

There is not an exact science here, but I typically choose 40 as my target. This allows us to easily see a pattern and find a percentage of pass/fail jobs per revision. If a test is failing 10% of the time, we would need 10 data points to see 1 failure. Imagine if we had 18 green tests and 2 failed tests, it is often wise to get at least 20 data points. I choose 40 because then in the case of 10% failure rate we have more evidence to show 10% failure rate.

If we look at the data from orangefactor it cannot tell us a real failure rate. The data we have will say X failures in Y pushes (30 failures in 150 pushes). While that looks like a 20% failure rate, it can be misleading for a few reasons:

In the case where we run each job every 5th push or as needed, we will have a larger range of commits from passing to failing. In this case we need to backfill.

Here we have to backfill first, then once the job is scheduled we can retrigger it. Caution here is that if a test is in a chunked job, you might need to backfill all the jobs- a trick is to see if it is in chunk X before/after the backfill, the chance of it being in the same chunk in the backfill range is very high.

Also when backfilling if a build fails, then you will not be able to pinpoint the specific commit. This is the same when people land multiple patches/bugs in the same commit- we just have less granularity.

what to do with the data

Once you have retriggered/backfilled a job, now you wait for it to finish. opt tests usually finish in <30 minutes once they start running- debug can be up to 1 hour.

After repeating the process a few times, the root cause will become visible:

some common exceptions to watch out for: