Bugzfeed has been decommissioned due to lack of usage. This page exists for historical reasons only.

For a more conversational introduction to the notification system, see this blog post: http://mrcote.info/blog/2014/04/04/bugzfeed-bugzilla-push-notifications/

Bugzfeed is available via WebSockets at ws://bugzfeed.mozilla.org/. There is also an example app at http://people.mozilla.org/~mcote/bugzfeed_example/.

Bugzfeed, being a relatively simple project, is currently serving its function well; there are no plans for further development at this time.

With a focus on Bugzilla as a platform, facilitating responsive, JavaScript-based front ends, detecting changes to bugs in a timely fashion is increasingly important. At the moment, the only way to determine if a bug has been recently updated is to poll; there is no push mechanism of any kind. This model has inherent problems, including but not limited to scalability (opening and closing connections is costly) and performance (polling must go through Bugzilla's permission system and other logic layers).

Provide a push-based notification system to inform clients of changes to bugs. Plan for scalability by minimizing server load and time from change to notification.

Providing details of what has changed is not necessary in the notification itself, although preferably this information would be available somehow, perhaps in a separate call.

Re-implementing Bugzilla's permissions system is not an option. It is complex enough that changing the current model would be major surgery (and would further diverge BMO from upstream), and maintaining two parallel implementations would incur maintenance costs and be error prone.

Notifications should not include changes to dependent/related bugs. This is harder to track based on the current Bugzilla database schema, and a properly designed system should be able to track them independently at the client's discretion. The exception here would be adding or removing dependencies, e.g. a notification will be sent for both bug X and Y if X is set to depend on Y.

We will implement a separate server that polls the database directly for changes to bugs and passes on *only the ID and change time* of the changed bug to its clients. The clients can then use the main Bugzilla REST API to determine the exact changes, which will enforce permissions as usual.

Important note: this whole design relies upon the idea that knowing the ID of a changed bug is not a security risk. This should be reasonable, given that the only information that is conveyed is that some bug has changed. One could use this information to determine the frequency of changes to a particular bug over some time frame, and hence perhaps an increased interest in a particular bug, but the changes could be to anything--main bug fields, comments, tracking flags, dependencies, etc.

Conceptually, there are three parts: 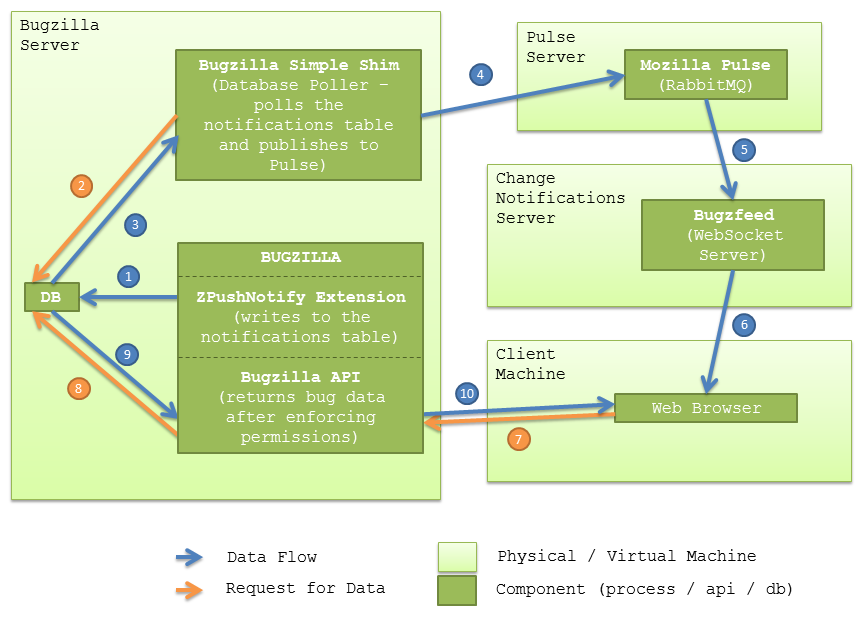 If you want to hack on the system, see the HACKING.md file in bugzfeed (https://github.com/mozilla/bugzfeed/blob/master/HACKING.md).

The changes are written by Bugzilla using the ZPushNotify extension (http://bzr.mozilla.org/bmo/4.2/files/head:/extensions/ZPushNotify/).

The Pulse messages are consumed by and served via WebSockets through bugzfeed (https://github.com/mozilla/bugzfeed).

Bugzfeed takes a number of commands, sent in JSON format. Each command message is an object containing at least a command attribute. Most commands take other, command-specific attributes as well. The server responds to each command with a JSON message containing at least the attributes result and command. result is either the string ok or error; if the latter, the response object also has an error attribute containing a descriptive string. command is the name of the command this message is in response to. Most commands will include other attributes in the response object as well.

The supported commands are

Subscribe to one or more bugs. Attributes for this command are

The response object also includes a bugs attribute, which is an array of all currently subscribed bugs after the command is executed.

Unsubscribe to one or more bugs. Attributes are

The response object also includes a bugs attribute, which is an array of all currently subscribed bugs after the command is executed.

Get the version of the bugzfeed server. There are no extra attributes for this command. The response object also includes a version attribute, which is a string representing the current version, e.g. 0.3.

The bugzfeed server caches the last 10 000 notifications it has received. This mechanism was put into place to account for brief client connections without maintaining per-connection state on the server. If the connection drops, after reconnecting a client can resubscribe to all its bugs and provide the time of the last known update to see if any updates have occurred while it was disconnected. It's suggested to use the exact time of the last update, not one second later, since technically multiple bugs can be updated in the same second. Just be aware that the last known update will be resent in this case, as all cached notifications with timestamps equal to or greater than the the value of the since are sent.

Note that caching is implicitly performed on all other pieces of the notification system. If the pulse shim goes down, Bugzilla will continue to write updates to the database, which will be read when it is restarted. The bugzfeed production server is configured to use a durable pulse queue, so if it goes down, it will catch up on all queued messages when it restarts.