The DevTools JS code base is quite large, and a lot of different people contribute to it all the time, so it's important that a set of standards be shared when coding so that the code is consistent, written in a predictable style that also hopefully helps avoid common mistakes.

In order to help people write standard-compliant code from the start and avoid wasting time during code reviews, a set of ESLint configuration files have been added to the DevTools code base so that JavaScript can be analyzed automatically.

This automatic linting can happen either while coding, in a code editor, or when using the command line.

Our ESLint rule set is meant to be used with ESLint 3.5.0.

The main rule set is defined in ./devtools/.eslintrc.

Running ESLint from the command line

The preferred way of running ESLint from the command line is by using mach like this:

This makes sure that ESLint runs with the same configuration that on our CI environment (see the next section).

Note that the file .eslintignore at the root of the repository contains a list of paths to ignore. This is because a lot of the code isn't ESLint compliant yet. We're in the process of making code free of ESLint warnings and errors, but this takes time. In the meantime, make sure the file or folder you are running ESLint on isn't ignored.

Relying only on people to run ESLint isn't enough to guarantee new warnings or errors aren't introduced in the code. Therefore, ESLint also runs automatically in our Continuous Integration environment. This means that every time a commit is pushed to one of the repositories, a job runs ESLint on the whole code.

If you are pushing a patch to the try repository to run the tests, then you can also tell it to run the ESLint job and therefore verify that you did not introduce new errors. If you build on all platforms, then the ESLint job will run by default, but if you selected a few platforms only in your trysyntax, then you need to also add eslint-gecko as a target platform for ESLint to run.

SublimeText is a popular code editor and it supports ESLint via a couple of plugins. Here are some pointers to get started:

You will also need to point SublimeLinter at the local eslint installation by setting the path to whatever ./mach eslint --setup gives you when you run it (include a trailing slash but remove the eslint binary filename) e.g.

Once done, open the mozilla project in SublimeText and open any JS file in the /devtools directory. You can then trigger the linter via the contextual menu (right click on the file itself) or with a keyboard shortcut (ctrl+option+L on Mac).

You should see errors and warnings in the gutter as shown in the screenshot below. You can also see all errors listed with ctrl+option+A, and individual errors by clicking in the gutter marker. 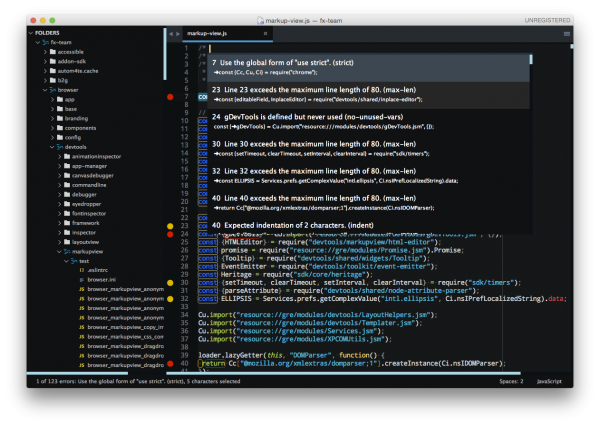 Install the linter-eslint package v.8.00 or above. Then go to the package settings and enable the following options: 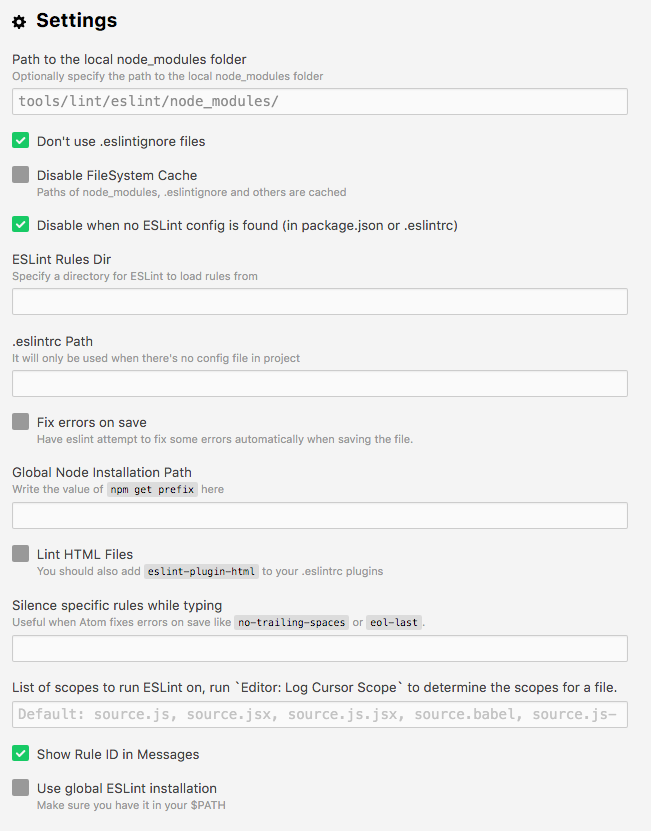 Once done, you should see errors and warnings as shown in the screenshot below. 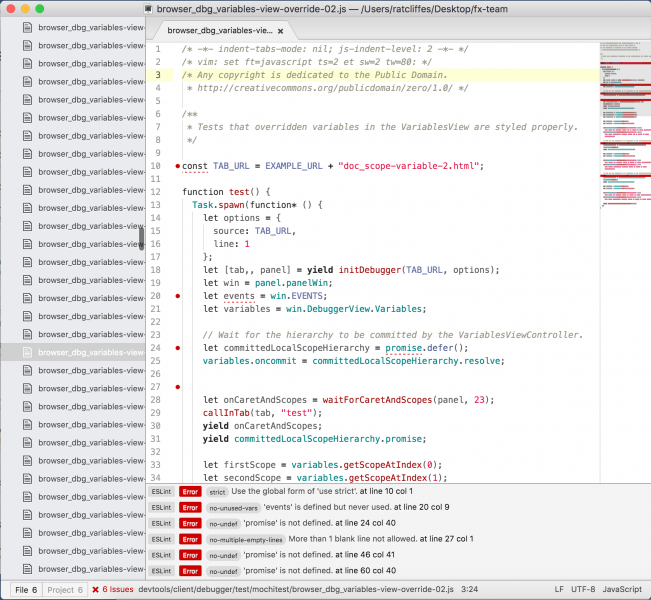 If you don't use Syntastic yet, the instructions here should get you started: https://wiki.mozilla.org/WebExtensions/Hacking#Vim

Alternatively, if you do use Syntastic already, add this to your .vimrc to get ESLint working where the path contains mozilla-central (adjust the path to reflect the one in your computer):

You probably need to close and reopen ViM for the changes to take effect. Then, open any file and try to edit it to cause an error, then save it. If all goes well, you will get some distinctive arrows pointing to the error. Hovering with the mouse will produce a sort of tooltip with more information about the error.

Install the dbaeumer.vscode-eslint package. Then go to the package settings and set the following option:

Once done, you should see errors and warnings as shown in the screenshot below. 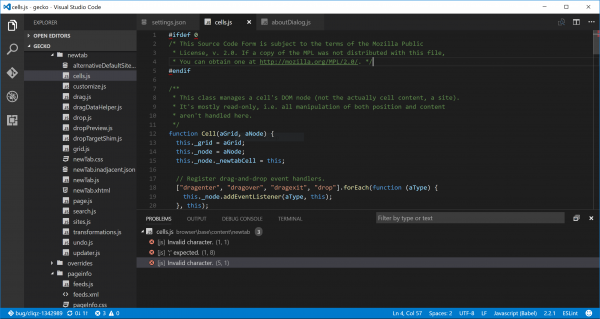 Getting Rid of ESLint Errors

Probably the best piece advice there is when talking about the code style is be consistent with the rest of the code in the file.

The primary source for the style guide is the .eslintrc; but for quick reference here are some of the main code style rules:

Commenting code is important, but bad comments can hurt too, so it's important to have a few rules in mind when commenting:

A lot of code in DevTools is asynchronous, because a lot of it relies on connecting to the DevTools debugger server and getting information from there in an asynchronous fashion.

It's easy to make mistakes with asynchronous code, so here are a few guidelines that should help:

You can find React-specific code style rules in the .eslintrc file.