LikeLines unlocks user-sourced video and serves as a building block for rich news story telling. Interesting bits of a video emerge naturally through community interaction with the video, allowing for video navigation and retrieval at the fragment level. 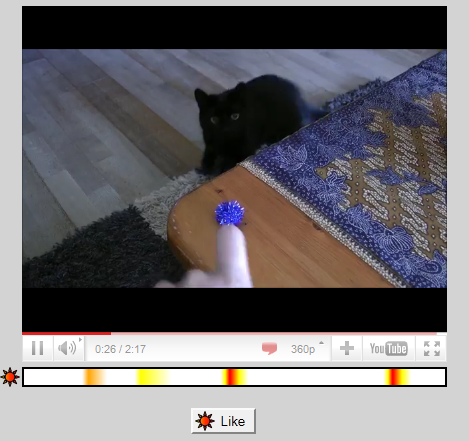 The following folks helped with this project:

Create a fully working prototype of LikeLines that generates navigation heatmaps based on user interaction (instead of displaying static heatmaps) and expand support to non-YouTube video players.

Additionally, I'd like to help others where I can.

Some guidance with Popcorn.js and CSS might speed up the development process.

User interaction with the video player are represented by fragments played. A played fragment is denoted by a timestamp of when the fragment was played and an interval of timecodes.

An example is shown below: