We have several use cases where we need to synchronize data on Firefox OS. We have browser/system related data like the one handled by Firefox Sync (history, forms, passwords, bookmarks, tabs, etc), but we also have data from Gaia and 3rd party applications with a very long variety of use cases including synchronizing SMS, call history, accounts configuration for Email and Calendar apps, settings, alarms, images, videos and a long etc.

For browser/system related data we considered using Firefox Sync directly, but that involves implementing the Firefox Sync client on Firefox OS. We did an analysis of the potential architecture of such a client and we even started working on it, but we stopped that work considering that Syncto looks like a better fit for Firefox OS.

Firefox Sync is not a backup solution and it does not mean to be one.

On a smartphone, when you lose your mobile, you expect a backup mechanism that restores your new phone to the state it had when it was lost.

Firefox Sync doesn't guarantee that your data will still be there when you restore your new phone.

This is one of the main reasons why we don't want to use Firefox Sync to sync new Firefox OS data.

Firefox OS can use Kinto to backup Firefox OS specific data and Syncto which implements the Kinto protocol to access and upload data to Firefox Sync.

As mentioned above, we studied the possibility of implementing a Firefox Sync client on Firefox OS and we decided that the best approach could be to reuse some of the parts that were already implemented on the platform (Firefox Accounts client, HAWK client, Token server client, etc). That would save us some development time, but would also tie us to Gecko, which means potentially less frequent updates (which are specially rare on Firefox OS). Having a content side solution (kinto.js) opens the door to easier updates and moving most part of the Sync client logic to the server side means mostly seamless updates. We could potentially even add the Kinto client as a Firefox OS addon and update it from the Marketplace when needed, but that's something that we still need to study in detail since addons are quite a new thing on Firefox OS.

As mentioned above as well, we have a lot of use cases for synchronizing data on Firefox OS. But we'd like to avoid implementing a specific solution for each use case whenever it's possible. We should aim to have a standard and uniform way of synchronizing data on FirefoxOS. And Kinto looks like the best candidate to provide that. We were already planning to use Kinto to synchronize in-app data, which is the biggest set of use cases for FirefoxOS, so having the chance to also synchronize browser/system related data with the same API makes a lot of sense. There is already a Kinto client named kinto.js and written in JS that empowers synchronization between a server and an local IndexedDB database with offline first support and that's exactly what we need on Firefox OS. Having this client on Firefox OS will allow us to fulfill most part of the use cases we identified so far.

The synchronizer app uses kinto.js to handle the sync process, together with fxsync-webcrypto which takes care of the WebCrypto calls.

It has various 'adapters', which handle the communication with the device's various DataStores and other low-level APIs (initially only for history and passwords, but adapters for tabs and bookmarks will probably also follow later). FxDesktop currently stores data for these four collections, plus addons and preferences [?: what about form data?].

If you would like to contribute a DataAdapter to the Sync app, come to the #fxos-sync irc channel, and see https://github.com/michielbdejong/gaia/tree/1200539-sync-app-integration-tests/apps/sync/#trying-out-the-sync-app (subject to change!) for how to test the parts we got working during sprint 6.

The status at the end of sprint 4 is shown in this demo video.

The work is planned as part of the Data Sync sprints, using the Firefox Sync client for Firefox OS: 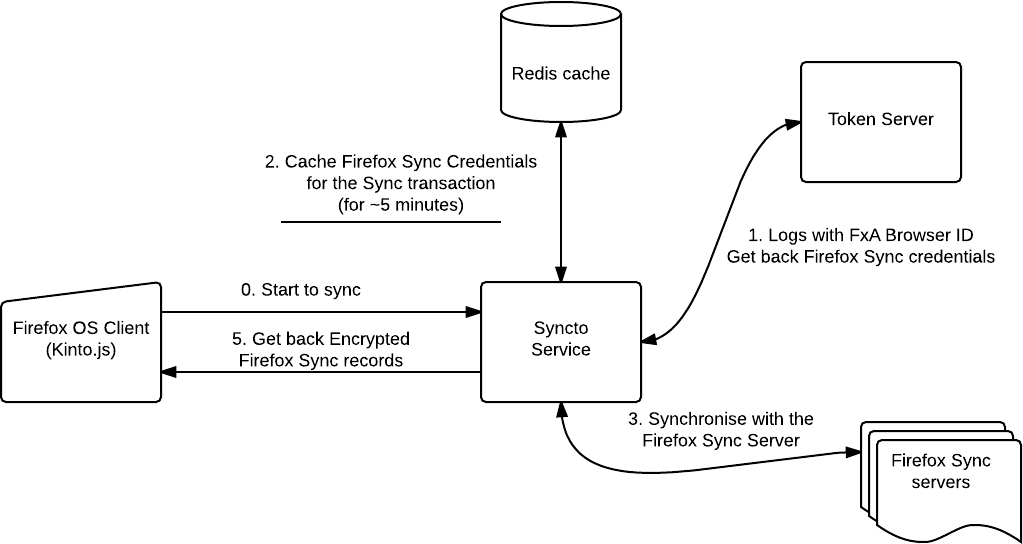