This page provides an archive for Mozilla Foundation roadmap materials. It has been created to people can see major changes in the planning framework over time.

the following is archived material from the April 2009 version of the Mozilla Foundation roadmap process.

The Mozilla Foundation Vision and Roadmap will be developed by staff, board and community members throughout 2009. The rough process looks like this: 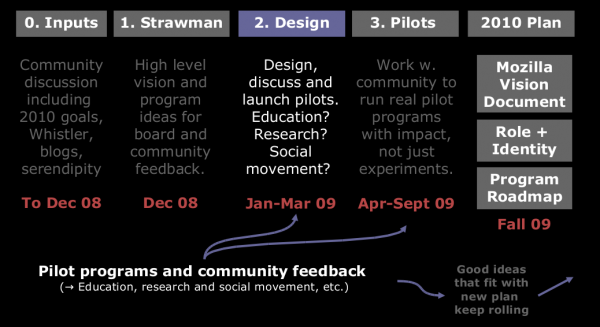 April 2009 update: As noted above, the initial strawman and brainstorming process are now complete. We're now in a piloting and experimenting phase. We will loop back for a strategic review and visioning in September 2009.

In late 2008, we developed a 'strawman' description of Mozilla Foundation role and programs as a way to gather input and stimulate discussion.

The 'role' section of the strawman proposed two primary functions for the Foundation:

These roles are illustrated here: 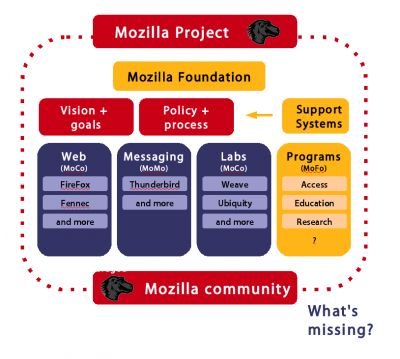 There was general agreement that these are the right roles for the Foundation. During 2009, the team is focused on building its skills in these two areas.

The 'program' section of the strawman identified five possible program areas for the Foundation to focus on:

During early 2009, we are experimenting with most of these ideas in one way or another. The Foundation's 2009 operational plan and the Foundation wiki provide details and offer status updates.