As per the first Ubiquity planning meeting, our goals for 0.2 are to:

Both of these solutions invite anyone to create and implement new ideas to further the conversation about using the browser to connect web services together in a safe, humane way.

Before reading the rest of this document, it may be helpful for readers to understand the Ubiquity 0.1.3 Architecture.

Below is the proposed architectural diagram for 0.2. Its individual parts are explained in the following sections of this document. 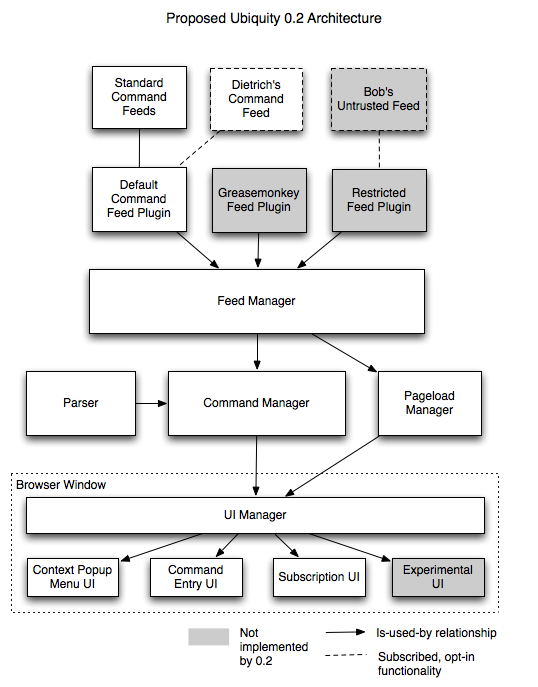 All UI components will interact with the UI Manager depicted in the proposed architectural diagram, which essentially serves as a facade to Ubiquity's functionality.

An example third-party client of the UI Manager API would be Aza's Experimental Mouse-Based Ubiquity feed.

Given a selection, clients of the UI Manager should be able to:

Implementation note: Look at CommandSource's method to get all commands.

Implementation note: Sorting is currently done entirely inside the parser, but we can pull it out and expose the scores directly so that a new plugin UI can make its own decisions about how to sort.

Given a command, clients of the UI Manager should be able to:

Implementation note: Once we unify Verbs and Commands, this will be trivial.

Given a command argument, clients of the UI Manager should be able to:

Implementation note: see above, with the caveat that relative quality rankings of noun suggestions barely exist yet and need a bunch of work independent of the UI extensibility work.

The main idea here is to decouple the security-related portion of Ubiquity's user interface and execution model from its implementation so that it's easier to experiment with more secure implementations.

In Ubiquity 0.1, command authors create a command feed by inserting an tag of the following form in the <HEAD> element of an HTML document:

In Ubiquity 0.2, the values of the REL and TYPE attributes will be used to locate an appropriate Feed Plugin for the feed. Much of what happens next is delegated to that plugin.

Creating a new Feed Plugin has the following requirements:

Requirement (1) will provide Feed Plugins with the freedom to implement whatever security model they need, while requirements (2) and (3) will give them the ability to present that model to the end-user in an understandable way.

The aim of 0.2 is to provide the infrastructure and tools for new, secure yet flexible Feed Plugins to arise that will eventually replace the default.

Possibilities for Feed Plugins include: