Earlier this year, we set out to reflect and evaluate our progress on our movement building strategy so far.

The Mozilla Foundation 2016-2018 Program Evaluation was finished over the summer. Read the full report.

Among our key findings:

As a next step, the Mozilla Foundation team is starting to tackle one of the key challenges outlined in the evaluation: defining what winning looks like.

Specifically, we're asking: which internet health issues are at once most urgent and concrete enough to make real progress on over the next few years? We're starting a number of conversations to help address this question -- and, more importantly, looking for allies, partners and grassroots leaders who we can work with and support on which ever issues we end up focusing on. If you are interested in being involved in this conversation, reach out to Sarah Watson.

Important notes about this version:

People everywhere experience the next wave of openness and opportunity on the Internet — they are empowered, safe and independent, even as the complexity and scale of the Internet grows around us.

This is a world where everyone can be—and ultimately is—a citizen of the web.

Mozilla will help create this world by building and drawing on our strengths:

The strategy described in the pages that follow focuses specifically on one element of our plan: how Mozilla will fuel the movement for an open Internet.

Mozilla believes that a global movement is vital to unlocking the next wave of openness and opportunity on the Internet—and, ultimately, to creating and sustaining an open Internet that truly puts people first. This is the Internet that Mozilla and our allies want.

That is why Mozilla is committed to fueling a movement that brings together a global force of people who are willing to stand up for—and build—the open Internet, together. 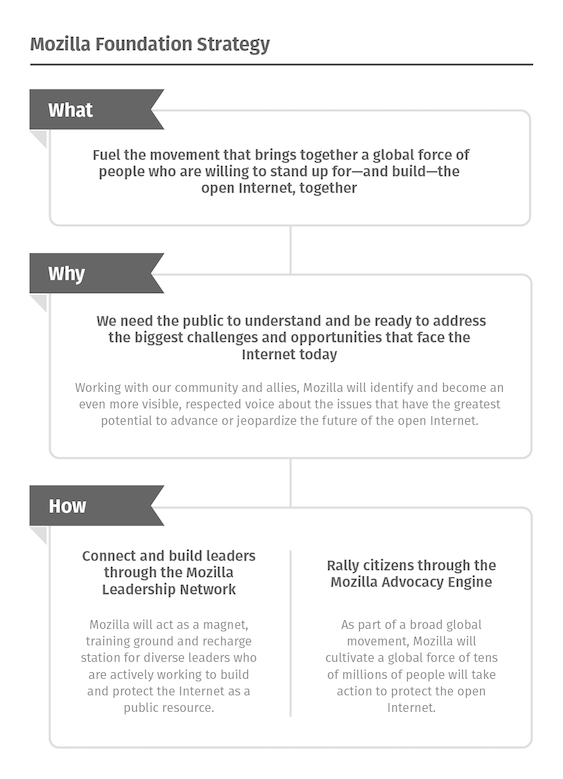 It’s urgent that we ​get citizens​ -- and the companies and governments that serve them -- thinking about the link between a healthy internet and a healthy society​.

Mozilla, our community and our allies need to be clear, compelling voices for the open Internet. Our goal is to work together to make open Internet issues mainstream issues, globally.

Over the past two years, we’ve invested over $40M aimed at articulating a clearer Internet health agenda, backing grassroots leaders, and running campaigns that put issues like privacy and net neutrality in the spotlight. We’ve done this by working with hundreds of thousands of supporters and dozens of partners around the world.

We need to continue -- and grow -- this investment, together. We also need to ​increase our focus on issues that are 1) in the public’s awareness, and 2) represent the most immediate threats and opportunities.​ With this in mind, Mozilla will further focus its agenda setting, fellowship, and campaign work on topics like:

Mozilla and our allies will bring these issues front-and-centre by being an increasingly visible and respected public voice, weaving these issues throughout our leadership and advocacy work, and by building technologies that take a stance.

How we got here

Here's a timeline showing the evolution of our thinking and strategy, with links to supporting documents and context (Updated June, 2016).

Phase 0: committing to a plan

Dec 2014 -- MoFo commits to drafting a long-term strategic plan. Crafting an ambitious learning and community strategy is set as a key 2015 goal, with a common approach and brand for all of Mozilla’s learning efforts.

By 2017, we want to build a 'Mozilla Academy:' a global classroom and lab for the citizens of the web. Part community, part academy, people come to Mozilla to unlock the power of the web for themselves, their organizations and the world.”

"Mozilla needs a more ambitious stance on how we teach the web. The web is at an open vs. closed crossroads; helping people build know-how and agency is key if we want to take the open path.”

June -- "Read, write, participate" as the essence of web literacy. Early feedback from colleagues / partners suggests an emphasis on helping people learn and hone ‘working in the open’ participation skills.

July -- "Web literacy and leadership." Creating a global community of people to teach and advocate.

"What’s become increasingly clear over the last month or so is: a) [leadership development] has become one of our core strengths and b) it is one of the biggest places we could have impact going forward. This has lead us to the conclusion that leadership development should be one of the core elements of our overall learning strategy."

July -- “Advocating for web literacy.” -- We begin to define advocacy as a core strategy for shifting understanding and thinking about the web.

“Mozilla is already doing good work that improves public understanding of the web and promote web literacy. Now we want to have impact at a larger scale.”

July 27 -- Phase one concludes. We summarized our strategy thinking to date as a slide deck for our Board and other internal audiences.

Aug -- we strike core working groups to flesh out our strategy: Leadership and Advocacy. Plus an “Impact” working group to help set KPIs and think about measurement and evaluation.

Oct 2015 -- “Fueling a movement.” We summarize how MoFo’s strategy fits into a broader 5-year vision for all Mozilla.

“We need to tackle big challenges like monopolies and walled gardens, but we also need to add fuel and energy to the next wave of open. This is how we had an impact the first time around with Firefox. It’s what we need to do again.”

Dec 4: we publish our strategic plan in draft summary and long form.

Dec 17: Mozilla Board approves our draft strategic plan and 2016 budget. A finalized business plan will ship in January.

“Together we will connect leaders, shape the agenda and rally citizens. The Mozilla Leadership Network will provide a magnet, training ground and lab for people working alongside us to ensure the web remains a public resource. And our Advocacy Engine will give Mozilla and its allies the ability to mobilize locally and globally, becoming the world’s biggest, boldest, most effective force standing for the internet.“

We have now completed version 0.9 of this plan in [1] and long form.

In October we set out a vision for the next phase of the Mozilla Foundation’s work: fueling the movement that is building the next wave of open into the digital world. Since then, we’ve been digging into the first layer ‘how do we do this?’ detail. We’ve been asking things like:

We’ve drafted a MoFo 2020 Strategy document to answer to these questions, which we're posting here for comment and feedback.

While this builds on our past work, it is worth noting that there are some important differences from the initial thinking we had earlier in the year. We started out talking about a ‘Mozilla Academy’ or ‘Mozilla Learning’. And we had universal web literacy as our top line social impact goal. Along the way, we realized that web literacy is one important area where our movement building work can impact the world — but that there are other issues where we want and need to have impact as well. The focus on a rolling agenda setting model in the current strategy reflects that realization.