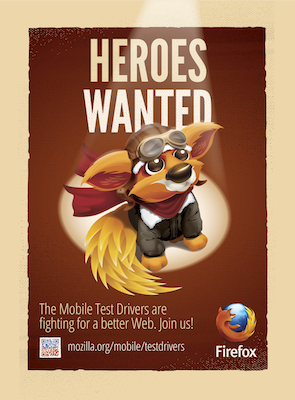 Firefox for Android is extremely important to Mozilla’s mission. We are delivering an exceptional mobile Web experience for users, with the performance, personalization and security they expect. We are also providing developers a platform to keep the mobile Web open by establishing Gecko as a top-tier mobile Web platform on Android. And we do all of this work in the shared Mozilla source repositories so all platforms, desktop and mobile, benefit each other.

Mozilla is embarking on the ambitious target to re-architect Firefox using a native Android user interface. This evolved product will deliver improvements to start-up time, memory usage, UI responsiveness and battery usage. Our plan is very ambitious, and will require everyone’s help and efforts for success.

In a short period of time, we have made enormous progress; but the mobile development team really needs more bugs filed so testing Nightlies in the meantime is ever more crucial to the product’s development. Nightly builds are generally used by developers and contributors who build and test Firefox to verify and test bugs. Nightly users should expect exciting changes with every update, as well as instability, possible regressions, and many bugs. Nightly users now can already feel the drastic differences from XUL-based Firefox, and identifying more bugs is critical to continue improving the product.

Get Involved in the Mobile Test Drivers Program!

We're looking for a diverse group of Mozillians (not just engineers) to join the program. We'll have some loaner phones for those participants who don't already have an Android smartphone.

As a Mobile Test Drivers Program participant, you'll be expected to

Please start by filling out this form.