The Moz2D graphics API, part of the Azure project, is a cross-platform interface onto the various graphics backends that Gecko uses for rendering such as Direct2D (1.0 and 1.1), Skia, Cairo, Quartz, and NV Path. Adding a new graphics platform to Gecko is accomplished by adding a backend to Moz2D (see #Implementing a new backend).

Some of the notable features of the API are:

The Gecko graphics API preceding Moz2D was Thebes which mostly consists of a C++ wrapper around Cairo, along with some Gecko-specific utility code, and a text API that uses platform text handling. Currently both the Thebes API and Moz2D API are in use. A Thebes wrapper around Moz2D allows code that still uses the Thebes API to run on top of Moz2D. Over time this code will be migrated to using the Moz2D API directly (see Azure Conversion).

Once the Azure project is completed—that is, all the backends have been implemented and all the calling code converted to use the new Moz2D API—the old Thebes API will be removed.

Side note: For historical reasons, there are some classes with “Thebes” in the name which will be surviving this process as they're not actually part of the graphics API. They may get renamed eventually, to reduce the number of magical words you need to know about, but be warned that just because some code has “Thebes” in the name, it does not mean that the code is on its way out!

Many of the performance gains anticipated from Moz2D come about due to its mostly-stateless API.

The Thebes API wrapped the Cairo graphics library which uses a stateful context model much like Postscript or Quartz 2D. To draw content, you make individual API calls to set up various bits of state in a context object, followed by another API call to actually perform drawing. For example, to stroke a shape with a dashed line, you would typically set the color, set the line width, set the dashing style, start a new path, emit path segments, and finally draw the stroke—all as separate API calls. In Cairo, even drawing an image requires the caller to set the source surface, emit a rectangle path, and fill—at least 6 API calls.

The overhead of setting up state can be justified when that state is re-used, but for CSS rendering this is typically not the case. Rather, for each item that is drawn fresh CSS values are fetched and re-set. Because the browser does not know what it is drawing, it is unable to group operations and re-use state effectively.

On the other hand, the HTML5 canvas element has a stateful API but because its state-tracking differs from that of Cairo drawing state must be tracked twice: once for canvas and once in Cairo.

A further complication specific to Cairo arises because internally Cairo uses a stateless surface API. On OS X, Cairo uses its Quartz backend for all drawing. However, when using Cairo, despite the fact that both Firefox and Safari ultimately use Quartz as their backend for drawing, Safari is faster than Firefox on some demos. We believe one reason this is the case is because Quartz is stateful. As a result, Cairo needs to convert from its stateful API to its internal, stateless surface API, then back to Quartz’s stateful API.

The Moz2D API, despite being mostly-stateless, was designed to map onto stateful APIs like Quartz in a more efficient manner.

Almost all the operations on an Moz2D DrawTarget (see #Draw targets below) take relevant state as parameters and do actual drawing. The only state carried by a DrawTarget is the destination surface itself plus a current transform and a current clip stack. We let the transform and clip state remain in the DrawTarget because those are the only pieces of state not constantly reset by CSS rendering. Our CSS rendering needs to always render under some given transform and clip and we don't want all our rendering code to have to pass those around all the time. Because of this, the Moz2D API is called mostly-stateless.

Following is an overview of the main pieces of the API. For the details including the most recent changes, please refer to http://mxr.mozilla.org/mozilla-central/source/gfx/2d/2D.h.

The two main components of the Moz2D API are: 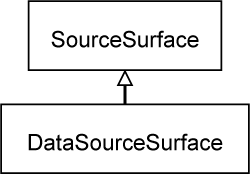 A SourceSurface is an opaque representation of a buffer, a handle. That means you can’t access its pixel data directly.

So what can you do?

Where do SourceSurfaces come from?

Each backend provides its own implementation of these interfaces however client code always using the backend-independent interfaces.

The implementation of these interfaces typically takes the following form:

A draw target performs drawing operations on some backing store (e.g. a D3D texture or other buffer).

Includes methods such as the following:

The following methods are stateful:

Typically the arguments to draw commands take the following order:

To draw paths, we create a PathBuilder for a DrawTarget using CreatePathBuilder. The PathBuilder has methods such as:

Finally, calling Finish returns a Path that can be used for drawing (e.g. with Fill or Stroke). After calling Finish the PathBuilder cannot be used again!

Patterns describe the pixels used as the source for a masked composition operation that is done by the different drawing commands. The different types of patterns are:

For linear and radial gradient patterns, the list of gradient stops is backend specific.

These objects are not ref-counted and may be allocated on the stack.

The Moz2D project can be developed independently of the rest of Gecko/Firefox by checking out the dedicated repository. The steps for each platform follow.

Depending on which backend you are interested in building, the steps are as follows:

When building Player2D beware of the following:

After building Moz2D, you can build the Player2D project (see below) as follows.

In order to test different backends and conduct performance analysis it is possible to make a recording of calls to the Moz2D API—for example, those used when rendering a certain Web page—and then replay them step by step on different backends.

On a platform where Moz2D content is enabled in Firefox (currently only Windows):

Sometimes recordings are prematurely ended and come up empty. This is a known bug.

Having made a recording it is possible to replay the steps on different backends using the Player2D tool (see #Building Moz2D above). The steps can be played back one by one and it is also possible to step backwards and forwards to inspect the result of each step.

The result is as follows:

(Note that in order to see anything in the View window you must double-click an appropriate object from the Objects window.) 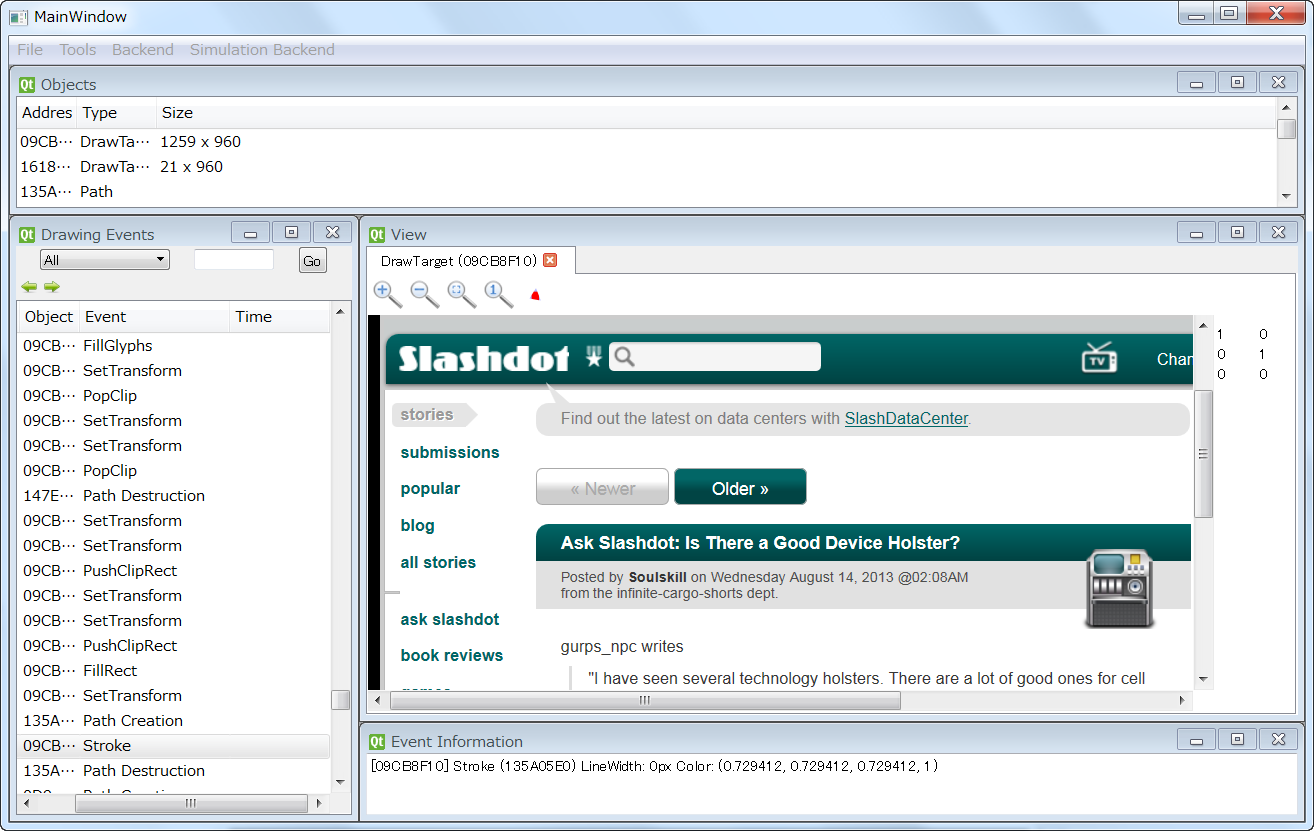 Some of the other tools available in the Moz2D repository include:

So you want to add your own backend… great! Here’s how to get started:

The following resources describe the motivation for and goals of this API: