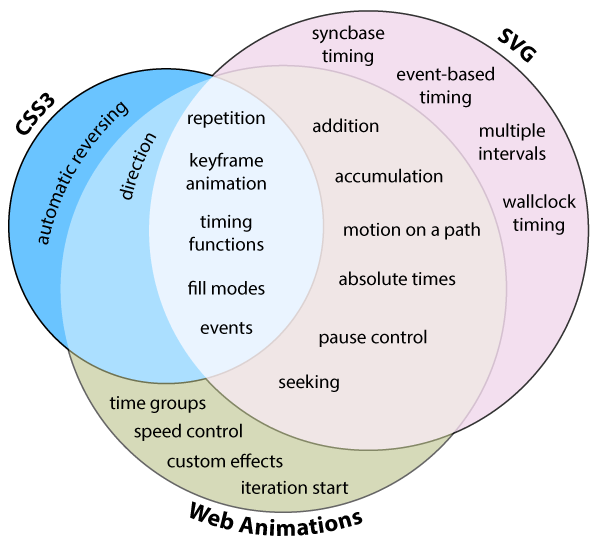 We could also add "Synchronizing with media" to Web Animations but I (Brian) have some uncertainty about if that will make it into v1. 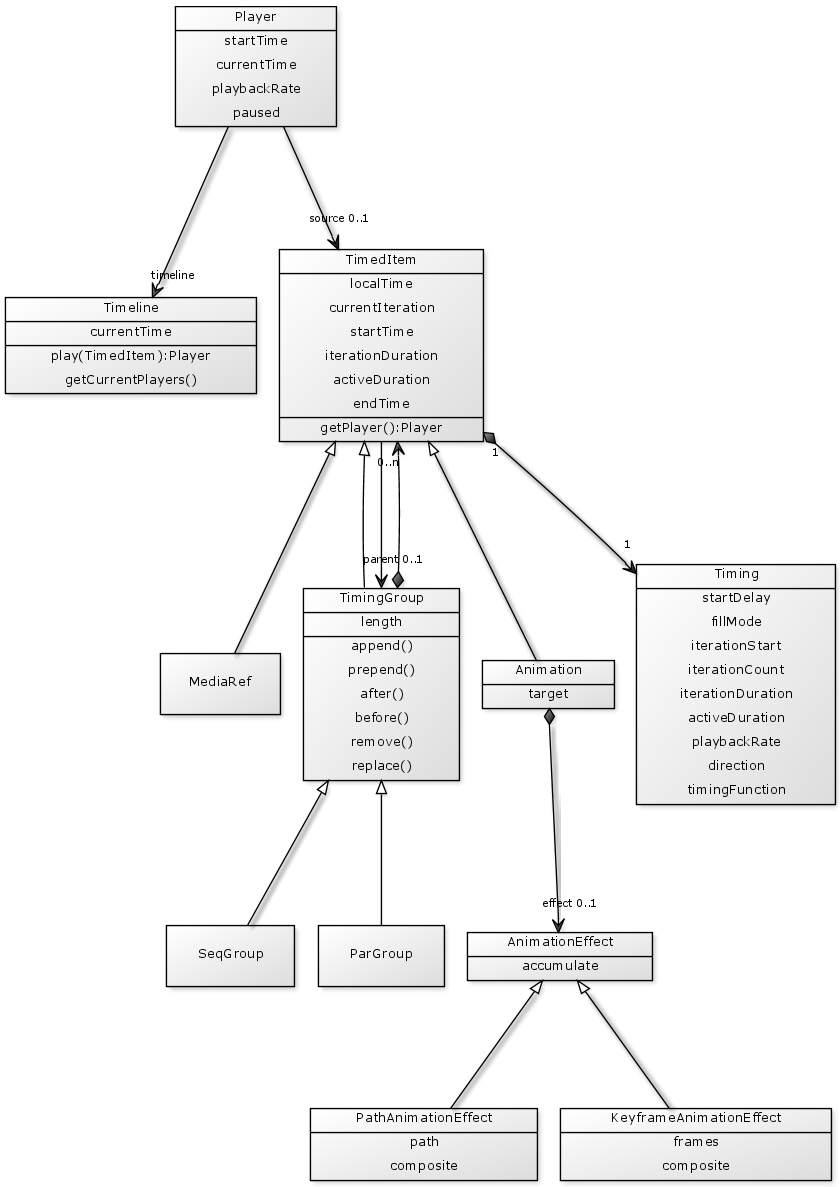 Some things have been simplified:

Currently we have this kind of arrangement:

Why do we have iterationDuration (and activeDuration) twice? Because iterationDuration can be "auto" which is especially useful for timing groups where it means "stretch to fit the children". At the same time it's useful to be able to query the current computed value.

I'm a bit concerned about setting and getting in different places. Not sure if the 'specified' is weird.

You can't do bounce functions in either CSS or SVG. These are really popular; most animations APIs have heaps of timing functions like this.

I wanted to extend cubic-bezier functions to take a series of numbers that define additional cubic bezier segments. The idea was to be a common-denominator so authoring tools could convert complex curves to this format. Then, in a future version we'd add syntax for generating spring functions etc.

I'm a bit concerned about the complexity of the numbers after the timing function. It's not obvious what they are and it's an additional concept, "rendering the timing function into a window". However, we need something like this not only for bounce effects but also because we removed timing functions from key frames.

CSS doesn't really define when animations start. That can be problematic but it can also be helpful: e.g. allows delaying animation to compensate for vsync etc.

playNow creates a new Player with a startTime set to the current time of the Timeline.

play creates schedules a new Player to be created and run. The UA starts it at the earliest possible time ensuring that it begins from the first frame. When it is started, the startTime is filled in and the Future is resolved (passing in the Player as the argument).

Issue 4: Out of range keyframe offsets

We currently don't allow positioning keyframes outside of the range [0,1] (i.e. 0% -> 100%). Why would you ever go outside this range? Because in CSS timing functions let you overshoot/undershoot. In these cases you extrapolate the values as needed.

Google want to allow you to specify keyframes outside this range so that when you overshoot you can control the animation beyond just simple extrapolation of the last segment (although you can already create a zero-length segment at 0 or 1 to at least control the slope of the values outside the [0,1] range).

Doing so has an impact on what you do when there is no keyframe at 0 or 1.

Currently, if there is no keyframe at 0 or 1, we create a new keyframe at these positions that represents the underlying value. This is similar but different to what CSS does (it snapshots the value when it creates the additional keyframe so its not quite the same.) This is important for the (very common) case of "to-animation", i.e. where you only specify one value and you want to animate from the current value to the target value.

If we allow keyframes outside [0,1] then it no longer makes sense to fill in keyframes at 0 and 1 (since you may have a keyframe, for example, at -0.3). The proposal from Google is you only fill these in if you have one value specified (i.e. to-animation or from-animation), otherwise you just extrapolate from the segments there.

So we're basically choosing between allowing keyframes outside [0,1] or aligning with CSS. I'm not sure if the special behaviour for a single-keyframe animation is inconsistent.

In terms of use cases there may be a use case for specifying values outside [0,1] range regarding calculating the range of overshoot but I'm not sure (i.e. specify a frame at 1.2, with a value of 800px, then using a timing function that overshoots to 1.2 you know the object will only go as far as 800px--previously you'd have to specify the appropriate value at 1.0 and do the extrapolation calculation yourself; however, calculating the maximum value of the timing function is still non-trivial with the current syntax.)

When creating an animation we want it to be as simple as possible, particularly we have this syntax:

But putting left on the LHS like that isn't possible in WebIDL unless we enumerate every animatable property in a dictionary and give them a default value of undefined.

I guess the WebIDL-native way would look like this:

That's not too bad but then when you animate multiple properties it gets really complex, like:

So we defined a KeyframeShortcut type to support { left: '100px' } etc. It's ECMAScript-only and we defined the procedure for interpreting the object so you don't get inconsistent results due to the order in which properties are read.

In addition we have a regular Keyframe dictionary and KeyframeValue dictionary which corresponds to the more complex syntax above. Google would like to get rid of the dictionaries and just keep KeyframeShortcut. That would mean there's no interface for non ECMAScript contexts. It also means iterating over the values of a keyframe returned by the API is somewhat more complex: you have to iterate over the properties of the object and be careful to ignore any 'offset' and 'composite' properties as opposed to simply iterating over the 'values' array.

I'm not sure how much all this matters?

Agenda for next meeting: