The main objective of this feature/product is: to provide users with a way of signing up for an email account from within Thunderbird.

I thought there were some, but the design seems to have been done entirely on paper and in conversations. Which is probably reasonable in this case, because it's quite simple. I do have a blog post with some mockups at [1], and the code is at [2].

The current implementation has three parts, an add-on for Thunderbird ("the add-on") which presents the UI, a Mozilla Messaging server component ("the server") which is responsible for telling the add-on what services are available, and collecting and grouping the email address suggestions, and the various third-party email provisioning APIs ("the providers"). (In the near future, the add-on will become core Thunderbird code.) 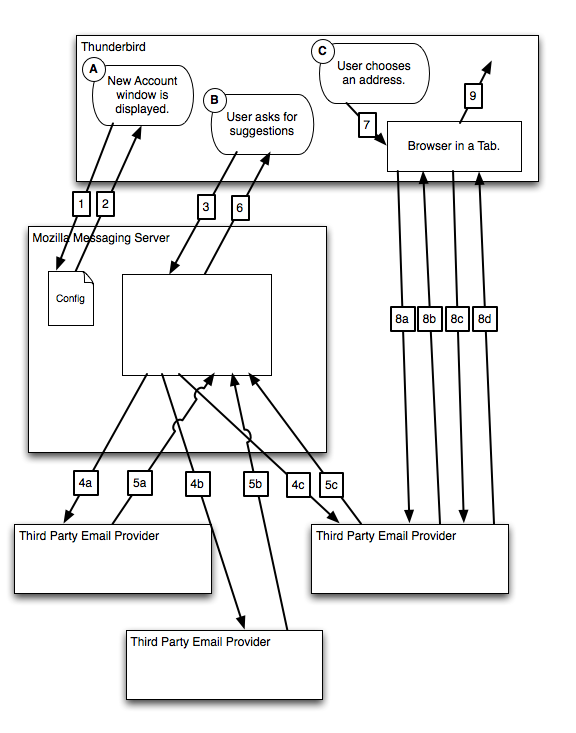 For details, see below:

There are three main interactions, labelled "A", "B", and "C" in the diagram above.

Describe any major components in the system and how they interact. Also include any third-party APIs (those Mozilla does not control) and what type of data is sent or received via those APIs.

Note: All communications will be over secure channels. HTTPS for the things mentioned below, and IMAPS/SMTPS for the newly-created account.

This component displays the UI to the user, and creates the account once the user has signed up with a provider.

It interacts with the Mozilla Messaging server to get the configuration at startup, and to get the list of suggested email addresses.

It interacts with the selected third party email provider through a browser tab to allow the user to sign up, and to get the data to create the account.

This component sends the configuration data to the addon, and gets and collates the list of suggested email addresses from the third party providers.

It interacts with the addon to send it the configuration at startup, and to get the first and last name to get the list of suggestions.

It interacts with the selected third party email providers to get the list of suggestions to return to the addon.

It interacts with the addon through a browser tab to allow the user to sign up, and to return the data to create the account.

It interacts with the Mozilla Messaging server to return the list of suggested email addresses.

Note: We don't write this component, and have limited influence over what it does.

Communication with the addon

In this section, the privacy champion will identify areas of user data risk and recommendations for minimizing the risk.

The Risk is that information logged by the Mozilla Messaging server will be unintentionally disclosed to untrusted third parties through a breach event.

The Risk is that users may not intend to spread their name to email providers they do not trust.

Resolution:
[RESOLVED] Users have control, via UI checkboxes, to which third parties their name is sent.

This feature isn't activated at all until a user attempts to set up a new account. At that time, the Mozilla server is contacted (and provided with nothing other than a standard HTTP request) and a list of suggested account providers is returned. Until the user takes more action, such as entering their name and asking for suggestions, no more communications are triggered. Information is not disclosed until users take action, and the information disclosed is directly provided within the context of that action.

The feature is not active by default, and unless a user activates the feature to create a new account, no information is collected or disseminated. It is clear in the use of the feature what information users are disclosing and to whom.

This feature is not activated by default, though it is available for use by all Thunderbird users who wish to activate it.

The minimal amount of data for each transaction is provided, and it should not be retained by Mozilla servers longer than necessary for the requested transaction (and for security-related logging).