In the Fission world, Actors will be the replacement for framescripts. Framescripts were how we structured code to be aware of the parent (UI) and child (content) separation, including establishing the communication channel between the two (via the message manager).

However, the framescripts had no way to establish further process separation downwards (that is, for out-of-process iframes). Actors will be the replacement.

How are they structured?

Currently, in the post-e10s Firefox codebase, we have code living in the parent process (UI) that is in plain JS (.js files) or in JS modules (.jsm). In the child process (hosting the content), we use framescripts (.js) and also JS modules. The framescripts are instantiated once per top-level frame (or, in simpler terms, once per tab). This code has access to all of the DOM from the web content, including iframes on it. 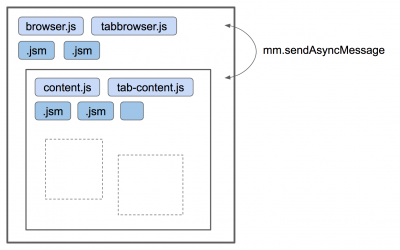 For Fission, all the framescripts will be gone, and the actors replacing them will be structured in pairs. For each frame from the web content (i.e., top-level or subframe), a pair of actors will be instantiated: one in the parent and one in the child process hosting that frame, and a direct channel of communication between the two will be established. 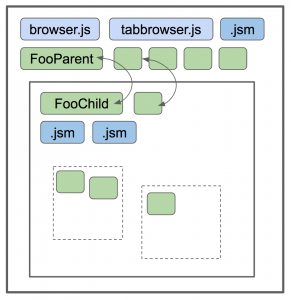 The communication between the actors' pairs will go through the IPC channel, and all the messages need to be declared in an IPDL file. This means that the actors are, in reality, a JS-implemented IPDL protocol, and that will provide a more strict type checking and validation, differently from the message manager which allowed free-form JS objects to be passed with the messages.

Another difference is that the actors will only communicate between each other. To communicate, the parent and child classes will need to implement send/recv functions, just like C++-implemented IPDL actors.