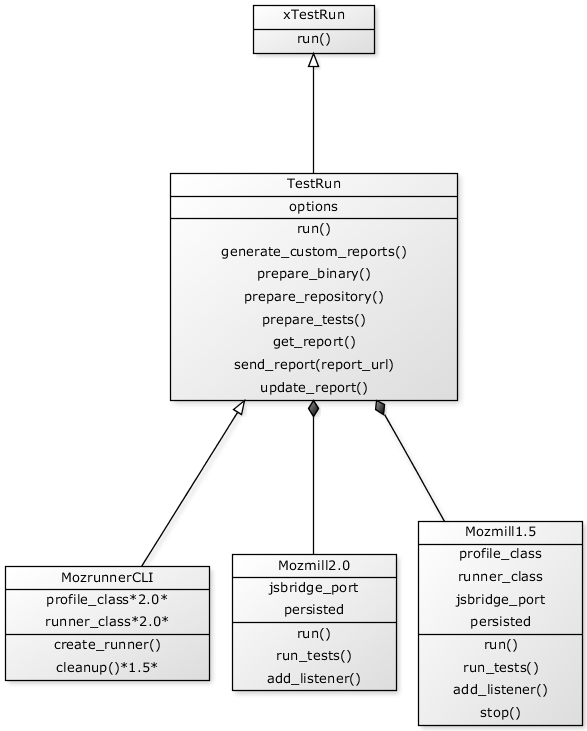 To allow a relative flexible module usage and to make code re-usable for other projects most of the current code should be moved to mozbase or made available as packages on PyPI.

Mozmill 2.0 essentially has the functionality of 1.5 and yet the solutions are not trivial. This issue stems from the fact that TestRun currently inherits implicitly (via object composition) from Mozmill CLI. It enforces us to write TestRun in such a way that we are trying to keep the structure consistent with the CLI even though program flow and the structure is very different between 1.5 and 2.0.

Inheriting from Mozrunner is viable as we can use Mozrunner for Mozilla applications and use Mozmill's API as an object. These two modules will offer the same control that the CLI offers without the maintainability issue.

It is possible to inherit from Mozmill API with Mozrunner object composition or use multiple inheritance, but these relationships are less logical. The TestRun module should be a Mozrunner instance logically due to the fact that it handles the preparation and configuration of tests and the Mozilla application. Another reason would be because it helps to be able to override the init in Mozrunner as we do not want to use any of the Mozrunner parser options.

The impact of removing Mozmill CLI will affect the following methods within TestRun:

These methods will offer the same functionality to the consumer, but will be changed to offer support for Mozmill 2.

There will also be three new methods:

These two reporting methods offers the TestRun the ability to get and send reports since this concept is very different in Mozmill 1.5 and 2.0. get_mozmill_version will use the Mozmill's metadata to return the version number. This might be useful for classes that inherit TestRun to be able to not run for specific versions.

Another possible feature is to have a constraint "allow_legacy_api" that will prevent systems with the Mozmill 1.5 API to run the tests.

To verify that the implementation is correctly working for Mozmill 1.5: