(need to expand this, this is not at all final wording)

The On-Demand Test Framework will be a full-service execution framework for Mozmill and perhaps eventually other tests. It will allow execution of tests across a grid of machines. Eventually, it will include auto-provisioning that grid and features to allow more granular parallel execution. 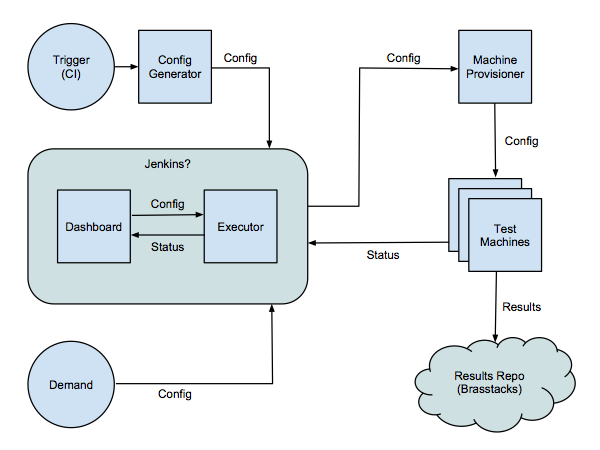 The Trigger and Config Generator components are a proposed part of integrating the CI goal into this system by automatically generating a Demand, and will not be covered in this project.

If an off-the-shelf CI tool like Jenkins turns out be appropriate for our needs, it may subsume the Dashboard and Executor components.

The question of which module controls/watchdogs the individual Test Machines performing the run has not been answered yet. Further analysis will show whether that's better as part of the Executor, Provisioner, whether the machine can run relatively autonomously once it's been initialized, or whether a new component is needed.

In addition to these, Status formats must be defined where they exist in the architecture. It is unknown yet as to which module will define these, or whether they will be significant enough to require subprojects.