The basic topology should include two separate machines on separate networks, each with their own NAT. We have some flexibility about which NAT, but for concreteness, I suggest a pair of Apple Airport Express NATs. I.e., the following topology: 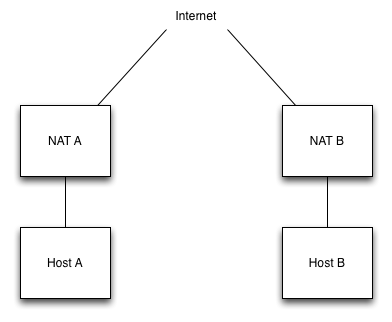 The following test series should be run, with one machine on each network with Nightly.

Conduct a call for no less than 5 minutes with apprtc resulting in no lag, no freezing, no audio or video delays, no degradation in quality from the previous revision.

Conduct a call for no less than 1 minute using webrtcme resulting in minimal lag and freezing.

Run the WebRTC-Landing tests with no failures.