The goal of this page is to document the Release Process Checklist being used by Firefox Release Managers to track each release throughout the cycle. Any changes to this documentation or the checklist should be reflected in both documents.

Given the nature of how nightly builds are created and shipped, the role of the release manager during this phase of the cycle skews much more heavily to the monitoring aspect rather than release mechanics.

Prior to the start of the cycle, the follow tasks need to be performed:

On a daily (or thereabouts) basis, the following items should be monitored:

On a weekly basis, a review of the Firefox Trello board should be done to monitor the status of features currently targeting that release. This can be done in conjunction with the weekly cross-functional meeting or Feature Status Review in the channel meeting. Release managers are also encouraged to watch the list for their release in order to receive notifications for any changes in status. 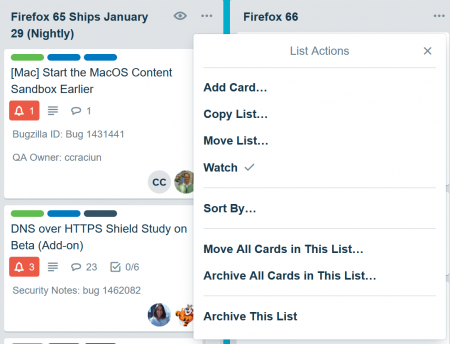 The release manager should also review the test plans for features targeting their releases to become familiar with how the feature works and how we intend to ensure it is of sufficient quality to ship in that release. This also gives an opportunity to provide feedback on the risk analysis and mitigations put in place.

Once Nightly test reports are emailed by QA, the release manager should check the newly-reported bugs to make sure flags are set correctly and the new issues have been addressed by engineering and product teams and prioritized accordingly. Release managers can help make sure that all of the pertinent information is in place to make decisions about whether the feature is ready to ship to Beta or whether it should remain Nightly-only for another cycle for more testing and development.

Near the end of the cycle, the following actions must be performed:

Once a release moves to the Beta channel, the daily tasks performed during the Nightly cycle will continue to be carried out as new bug reports come in from a wider audience and new features move through the QA cycle towards shipping.

There is also an added triage step during Beta - monitoring the “missed uplifts” email or queries to find issues fixed in Nightly but that still affect Beta. The release owner should check these issues to assess whether uplift is a good idea. If not, then the issue should be marked wontfix for Beta.

To ship a release, a series of steps must be taken with various roles representing multiple teams expected to contribute. In the Release Process spreadsheet, the Beta Checklist template tab should be duplicated for each new release for proper tracking. After a release is shipped, the tab can be hidden in order to minimize clutter. 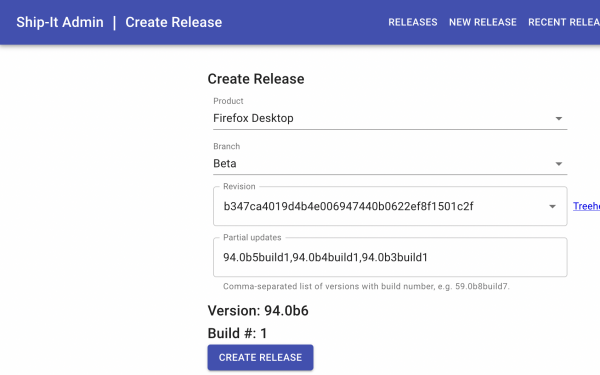 Fenix betas are created as needed by the mobile team. 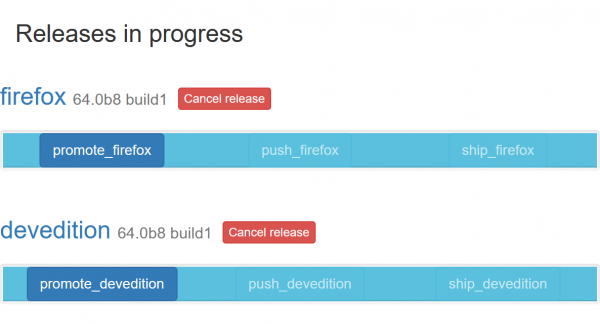 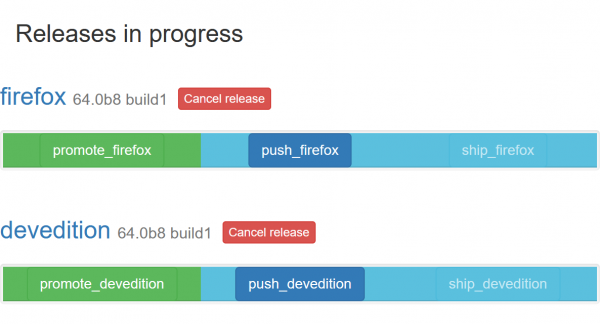 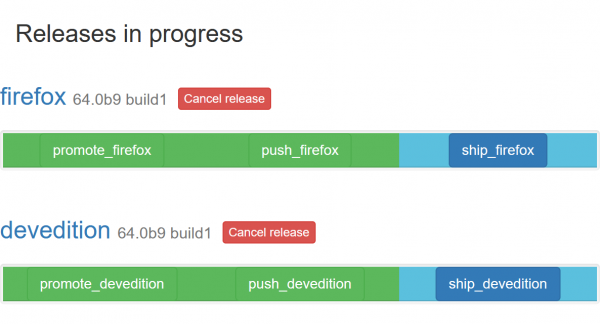 Summary of email notifications for QA/relman

Here is an example of the subject lines of emails to expect on release-signoff, and what they mean.

Sent when relman (or shipit, for automated beta builds) sets up a new build in ship-it and starts the "build promotion" process. Several hours later (4-7 or so) builds will start to appear in the candidates directory. Be sure to note the build number and test the right builds.

Sent when all the builds are complete. These builds can be used for manual/functional testing.

When this email is sent, the builds are ready for update testing on the beta-cdntest channel.

This is an automated notice, for the release managers, that releng has set up the update rules in Balrog (a control panel for the update server).

This is sent manually by release management, to acknowledge that the release is now live. It's now ready for update testing on the beta channel.

This tab is for tracking bugs which are being tracked for possible uplift to the mozilla-release repository for RC builds. The primary objectives are:

RC week is also the time to finalize release notes and begin gathering feedback from the #release-notes Slack channel.

The What’s New Page has been something which has suffered from coordination problems in the past, since it requires contributions from Marketing, Localization, Web Development, and QA. A meeting should be held a few weeks prior to Go-Live to establish a timetable for the steps listed in the checklist.

Similar to the Beta and RC checklists, there are many common steps which have been previously covered above. Items specific to Go-Live are noted below.

Prior To Launch Day

Similar to the RC Uplifts tab. The primary purpose of this tab is to track any bugs driving a dot release, bugs which are under consideration to ride-along with a dot release if one is created, and to assess which products are affected by any drivers.

It is up to the release manager what should go into a dot release, and we try to keep these uplift guidelines in mind. Adding even what looks like a trivial fix can add risk, both to the process (delay, extra testing, work for other teams) and to causing new regressions. For security issues, we may not want to take them in a dot release unless there is particular pressure to do so.

The checklist for dot releases is essentially a combination of the RC and Go-Live checklists and the items should be treated mostly the same (except under chemspill situations where an accelerated time table may apply).

Of note, however, is the need for the release manager to email the release-drivers list prior to the creation of the builds (ideally shortly after the decision is made to go forward with the release) to notify all stakeholders of the forthcoming release. Also, the release manager should verify that the rollout percentages in Balrog & Google Play for the current release are set as expected (taking into account any blocking quality issues) to avoid unexpected fallback versions when the new release ships. Finally, if there are security fixes being included in the release, coordinate with the security team to ensure that they are aware of the bugs being fixed and can handle CVE assignments and security advisories.