This specification document is DEPRECATED (old and crusty). The W3C has undertaken standardization of CSP and you can find the W3C spec here.

Content Security Policy is intended to help web designers or server administrators specify how content interacts on their web sites. It helps mitigate and detect types of attacks such as XSS and data injection. CSP is not intended to be a main line of defense, but rather one of the many layers of security that can be employed to help secure a web site. More information about the intended use of CSP is available in the goals section of the overview document.

The purpose of this document is to provide a detailed description of how Content Security Policy definitions can be deployed. It explains the syntax for creating a CSP policy definition and how the defined policies are received and enforced by a user agent.

When CSP is activated for a site, a few base restrictions in the browser environment are enforced by default to help provide proper enforcement of any policy defined. These base restrictions provide general security enhancements by limiting the types of dynamic content that is allowed: generally any script on a site that converts text into code (through the use of eval() or similar functions) is disallowed. Details of the refinements can be found in the Base Restrictions section.

A policy is composed of directives with their corresponding values. Any number of directives can be defined, but the allow directive must always be present, or CSP will revert to enforcing the policy allow 'none' for the protected content. Each directive is followed with a list of host expressions except for policy-uri and report-uri which contain a single URI value. Some example policy sets are provided below.

Note: In the case of policy refinements as described above, it is possible to have two report-uri values; in this situation, a copy of the report is sent to each of the two URIs.

Example 1: Site wants all content to come from its own domain:

Example 2: Auction site wants to allow images from anywhere, plugin content from a list of trusted media providers (including a content distribution network), and scripts only from its server hosting sanitized JavaScript:

Example 4: Online payments site wants to ensure that all of the content in its pages is loaded over SSL to prevent attackers from eavesdropping on requests for insecure content:

When a scheme alone is the entire source expression (e.g., javascript:) a User Agent MUST NOT enforce host and port restrictions. This is because for some schemes, host and port are irrelevant (e.g., data:).

Valid sources do not always require a host. Schemes such as data can be enabled as a source by stating the name of the scheme followed by a colon. For example:

A wildcard "*" token may be used in place of the port number. This indicates that all ports (except banned ports) are valid for the source. Examples:

Each source expression's host name MAY contain up to one wildcard (*) and it MUST be the left-most DNS label.

In place of source expressions, these keywords can be used to specify classes of sources.

'none'
Refers to the empty set (no hosts are valid)
'self'
Refers to the source serving the protected content -- this is inclusive of scheme, host and port.

User Agents MUST notify any provided report-uri when its containing policy is violated. These reports contain information about the protected resource and the violating content, and MUST be transmitted to any specified report-uris via HTTP POST if available in the employed scheme, otherwise User Agents MUST choose an appropriate "submit" method. User Agents MUST NOT honor redirection responses. The report body MUST be a JSON object having the following properties:

request
HTTP request line of the resource whose policy is violated (including method, resource, path, HTTP version)
request-headers
HTTP request headers sent with the request (above) for the CSP-Protected content
blocked-uri
URI of the resource that was blocked from loading due to a violation in policy
violated-directive
The policy section that was violated (e.g., "script-src *.mozilla.org").
original-policy
The original policy as served in the X-Content-Security-Policy HTTP header (or if there were multiple headers, a comma separated list of the policies)

NOTE: in the case where a protected resource is not rendered because the frame-ancestors directive was violated, User Agents MUST NOT send blocked-uri (it is assumed to be the same as the request URI).

The MIME type of the transmitted report will be set to application/json.

In this example, a page located at http://example.com/index.html was requested using HTTP 1.1 via the GET method. It provided a policy that included the directive "img-src 'self'", which was violated by a request for http://evil.com/some_image.png. The sample JSON object sent to the policy-specified report-uri follows.

The following restrictions will apply whenever any CSP directives are declared for a document:

No inline scripts will execute

User Agents MUST generate and send a violation report with the violated-directive value set to "Base Restriction Violation: no inline scripts will execute" when this base restriction is violated.

Code will not be created from strings

User Agents must generate and send a violation report with the violated-directive value set to "Base Restriction Violation: no code will be created with strings" when this base restriction is violated.

No data: URIs unless opted-in to via explicit policy

User Agents MUST generate and send a violation report with the fields set appropriately when this base restriction is violated.

XBL bindings must come from chrome: or resource: URIs

NOTE: this is currently Firefox-Specific, but related behavior in other User Agents should also be limited.

User Agents MUST generate and send a violation report with the fields set appropriately when this base restriction is violated.

User Agents MUST raise a fatal error AND ignore any policy-uri that does not refer to the same origin (scheme/host/port) as the protected document OR that is not served with MIME type set to "text/x-content-security-policy".

User Agents MUST raise a non-fatal warning AND ignore any report-uri directive values that refer to an origin not of the same public suffix AND base host. (For instance, a report-uri in a policy for "www.mysite.com" may refer to anything that ends with "mysite.com".)

Privacy Consideration: The report sent to the report-uri contains potentially sensitive information, including cookie values and query string parameters. This information is intended only for the protected site for debugging purposes or similar. An attacker should not be allowed to steal the report information by injecting a report-uri, along with an arbitrary policy to be violated.

User Agents MUST activate CSP and enforce it for a document when the X-Content-Security-Policy HTTP header is provided in its HTTP response. User Agents MUST parse AND begin enforcing the policy before any of the protected content is parsed.

When multiple instances of the X-Content-Security-Policy HTTP header are present in an HTTP response, the User Agent MUST enforce the intersection of the policies; essentially, the User Agent SHOULD enforce a policy that is more strict than both the policies specified in the multiple headers, but only strict enough to correspond to rules in all policies. Any web request that satisfied all policies alone MUST be accepted by the new policy, but any request rejected by any of of the two policies MUST be rejected by the new policy.

If more than two instances of the X-Content-Security-Policy header are present in the response, the User Agent MUST perform intersection digest-style: the first two policies are removed from the set of headers to digest, intersected, and the result is placed back in the set. This continues until only one policy remains. e.g.,

Example: Report-duplication (or multiple reporting) is useful in the case where two different groups want to receive reports, but may not share access to the reports archive. Take for instance a large web company that has a separate sysadmin staff (who are also in charge of security at some level) and project teams. One project team may be interested in receiving reports about violations of their CSP, but are not interested in violations on other parts of the web site. The sysadmin team wants to record all violations from all parts of the site into a massive archive. The multiple reporting technique allows both entities to receive the reports they want without causing extra data-mining work on the part of the sysadmin team to isolate the reports that each project team may want.

Since HTTP headers and the entire request string are sent in the report, it is possible that, in case of compromise, a violation report could leak private information to an arbitrary URI.

To avoid any possible cross-domain cookie or authentication token transfer, User Agents MUST only transmit reports to the same origin (scheme, host, and port) that served the protected content. 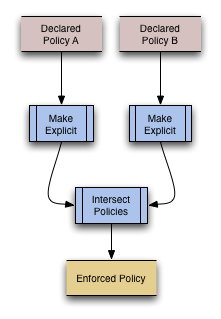 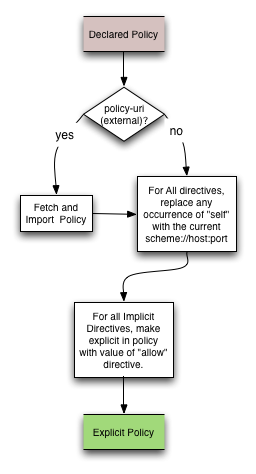 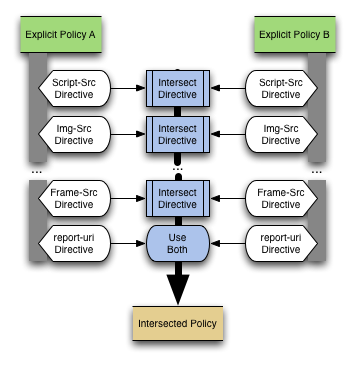 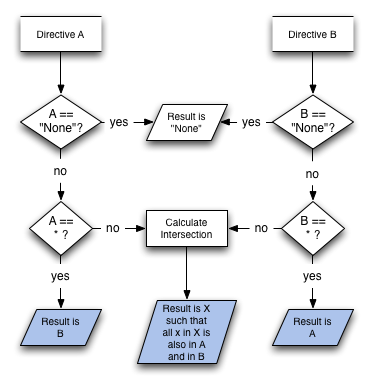 A number of different problems may be encountered while parsing the CSP policy. These parse errors are not policy violations, and any error messages caused by parse errors are separate from the violation report sites may elect to receive when their site's policies are violated, via the report-uri directive.

Missing "allow"
If the "allow" directive is not present, the User Agent SHOULD report a warning message to the Error Console and MUST assume the directive value "allow 'none'" for the policy. The User Agent MUST enforce the rest of the policy as written (assuming no other policy errors are encountered).

Directive Syntax Error
When any known directive contains a value that violates CSP syntax, the User Agent SHOULD report a warning message stating the invalid syntax to the Error Console AND MUST "fail closed" by enforcing the most secure policy, "allow 'none'" for the protected document.

No Recognized Directives
If no recognized directives are present in the stated policy, the User Agent SHOULD report a warning message to the Error Console stating "invalid policy" AND MUST enforce the policy "allow 'none'" on the protected document.

Other Parsing Errors
Any other parsing errors not covered here SHOULD cause the User Agent to enforce the policy "allow 'none'". If such a case should arise, the User Agent SHOULD report a descriptive error to the Error Console describing the problem.

User Scripts
CSP should not interfere with the operation of user-supplied scripts (such as browser add-ons and bookmarklets).

Redirects to Content
When a resource is requested from a URI X[0] protected by a policy CSP, that resource's URI is only loaded if permitted by CSP. If the URI X[0] resolves to an HTTP redirect of any kind (temporary or permanent) the new URI X[1] is also required to be permitted by the policy CSP. The effect is that all requests generated by the document must be permitted by the CSP whether they are the initial request or the steps taken during a redirect.

Future Directives
In order to support future directives (or new versions of this spec), CSP must parse but ignore directives with unknown names. When an unknown directive is encountered by the UA, a warning is posted to the error console, and the directive is ignored.

To ease deployment, CSP can be deployed in "report-only" mode where a policy served is not enforced, but any violations are reported to a provided URI. The effect is a "what if" scenario where a site can specify a policy and measure how much breaks. Additionally, a report-only header can be used to test a future revision to a policy without actually deploying it.

The X-Content-Security-Policy HTTP Response header MAY be present in the Message Headers section of a server's HTTP response. Specifically, it MUST NOT appear in the Trailer Headers section of the response, so that the policy may be enforced as the rest of the page content loads. Multiple X-Content-Security-Policy Response headers MAY be inserted.