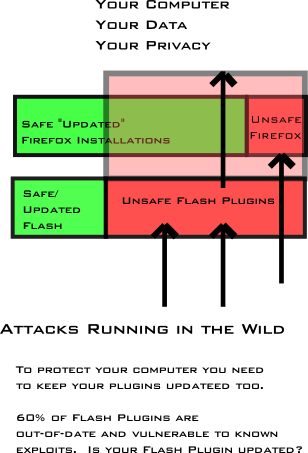 Over the last many years the Mozilla Project has worked hard at trying to find and fix security bugs in the Mozilla code before attackers have been able to develop exploits. The Security Bug Bounty Program ( http://www.mozilla.org/security/bug-bounty.html ) , Frequent Security Updates we do for Firefox users ( http://www.mozilla.org/security/announce/ ) , and the aggressive updating of Firefox Users have been the cornerstones of this effort.

Currently it appears the greatest security risk to Firefox users is via exploitation of plugins the user has installed. A number of studies have documented this

They show Firefox users under attack from a zero day for Adobe Flash and Reader.

The common response to bugs like these is that "it's not our problem." That is true to some extent, but here are some concrete things we could do.

While we are waiting from a patch from adobe

Nine days after the release of a zero day fix version (July 30, 2009). http://www.adobe.com/support/security/bulletins/apsb09-10.html only around 7% of flash users have been updated.

Adobe is working on some fixes to this, but information campaigns will be needed until those fixes are in-place.

Work to help users understand plugins that are out of date, and accelerate udpates.