The architecture we're building should therefore support at least this load. 200 RPS seems a good goal.

Since calls are done on third party servers, there's an incompressible time spent there. One request can last up to 3 seconds. So in order to support 200 RPS, we need to be able to support a real load of 600 simultaneous clients.

The RPS is getting bigger if we're doing an asynchronous architecture since the client will do at least one more request per transaction, but the number of simultaneous client will be very low.

The ADU is pulled from AMO, other data is from log analysis in Splunk.

(1) errors can be anything from expired oauth tokens or invalid recipient email addresses for gmail to twitter outages.

These are fairly stable.

The average size of data a user transfers through our servers is 16 bytes per day. So if a queue stores this data, it represents 1.5 Gbyte / day for 100M users. 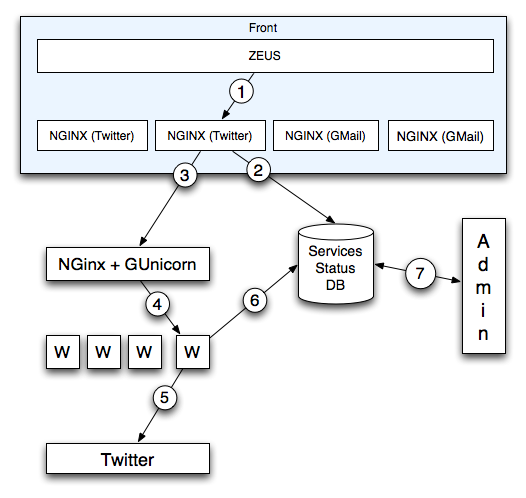 The synchronous architecture is composed of two layers:

Both front and back layer interacts with the Services Status DB, a key/value storage global to the cluster that indicates the status of each service.

1. Zeus uses a X-Target-Service header that indicates which service is going to be called. For each service there's at least two servers that can be load balanced to receive requests. Zeus uses a round-robin strategy.

4. The back-end server proxies to the Gunicorn server, which picks a worker.

5. The worker does the job and returns the result.

6. The worker pings the Service Status DB In order to indicate whether the request was a success or a failure.

7. An admin application let Ops view the current status of the Services, but also shut down a specific service if needed.

1. Each service has at least two front servers. If they are all down, Zeus returns a 503 + Retry-After

2. Each front server ask the services DB the status of the service. If the DB is unreachable, it sends the request to a back-end server nevertheless. If the DB returns a value that indicates that the service is down, it returns a 503 + Retry-After.

3. Each front server has at least two back-end servers to proxy requests to. If they are all down, it returns a 503 + Retry-After

4. The back-end server pass the request to a worker. If the worker fails to reach the service after a given time, it returns a 503 + Retry after and indicates to the service DB the status.

5. If the worker cannot join the Service DB, it ignores it.

6. If the worker crashes while processing the request, a 500 is returned and the Service DB is pinged.

The API keys for each services are stored in the back-end layer only. The front end layer, accessible from outside, does not have the keys and just pass the requests.

The Synchronous architecture keeps the connection open during the whole transaction. The Front and back end web servers both pile up requests until they are over.

The Gunicorn server uses asynchronous workers that are based on GEvent which allow cooperative sockets. The immediate benefit is the ability to handle a lot of simultaneous requests that are I/O bound. 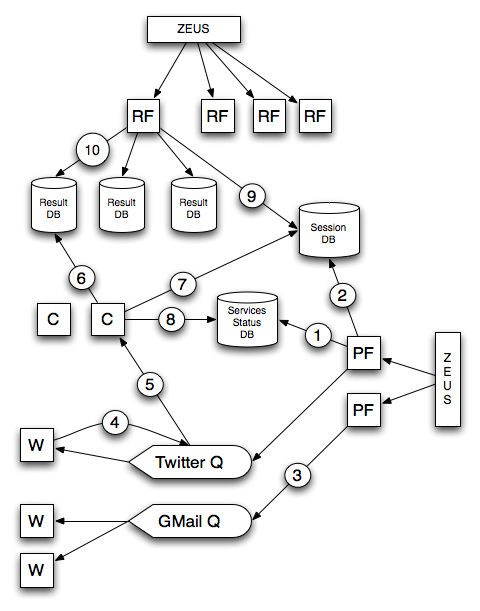 1. PF checks the status of a service by looking at the Services Status DB. Each service has a (GR / BR) ratio stored in that DB. GR = Number of good responses. BR = Number of bad responses. What are "Good" and "Bad" responses is to the workers discretion.

Given a threshold, PF can decide to return a 503 immediately, together with a Retry-After header.

2. PF creates a unique Session ID for the transaction and stores it into the Session DB.

3. PF push the work to be done, together with the session id, into the right queue. It then return a 202 code to the client.

4. A worker picks the job and do it. Once it gets the result back, it sends back the result in a response queue.

5. A Consumer picks the jobs that are done in the response queue.

6. The consumer selects a Result DB server by using a simple modulo-based shard algorithm. It pushes the result into the select Result DB.

7. The consumer updates the Session DB by writing there the Result Server ID associated to the Session ID. Once this is done, the job is removed from the queue.

8. The consumer updates the Service status DB with the status (G or F) provided by the worker.

9. When the user ask for the result via RF, RF looks in the Session DB what is the Response DB that has the stored result.

10. The RF then picks the result and returns it.

The Session DB and Services Status DB are key/value stores global to the cluster and replicated in several places. They can be eventually consistent.

The Result DB is a key/value store local to a single server. It holds the result for a specific transaction.

The queues are providing a Publisher/Subscriber pattern, where each worker picks jobs to be executed on a specific service.

The general idea is that a transaction can be re-tried manually by the user if there's an issue in our system. Although our system should prevent clients to send more work if a third party service is down. 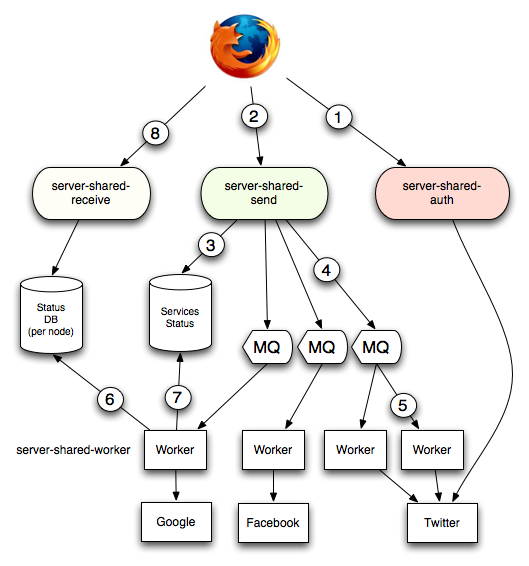