From MozillaWiki
< State Of The Internet‎ | Surveillance Economy
Jump to: navigation, search

Changing the consent conversation from “control over your privacy” to “power over your identity.”

The Problem to Solve

None of us are the same person all day long. Our minds and behaviors jump from context to context, sometimes by the minute.


“Home” you likes to hang out with the kids, watching Netflix’s “Kids” profile, all safe under the eye of your home security system. “Work” you deals with passwords, HR websites, training materials, and your inbox. “Monday Night Football” you Ubers to the bar, shares Fantasy Drafts, and uses Venmo to pay for your half of the bill. In some moments you want to be “fully you” online. In others, you want to be anonymous or pseudonymous. And every side of you expects your technology to understand that. Different sharing preferences, different security levels, different amounts and types of data you want accessed.

Yet, we have no choice but to present our “full” selves to every online service.


Since there is little risk to collecting as much personal data as possible, companies extract everything they can about us— our “full selves.” Right now, all of this data is available to the highest bidder. Without us knowing, our surplus data is moved, traded, “enriched” and exchanged amongst brokers every day–to the point where truly knowing what’s out there about us and how it shapes our lives is next to impossible.

We want a world in which data is shared—under strong protections—on a need-to-know basis.

By giving people power over their faceted identities, and the information that is exchanged in every context, we will prevent service providers from being able to harvest as much data as possible. This would shift the conversation from control over privacy to power over identity.


Change the consent conversation from “control over your privacy” to “power over your identity.”


Allow people to present what they want about themselves, when they want. Data is shared on a need to know basis.

That there is enough risk and benefit for companies to acquiesce to collecting less data.


If we can control the volume and relevancy of data which services collect, we will…


By balancing the power between users and providers.


By allowing users to truly represent themselves, and reduce presumptions, assumptions, and marginalization.


By increasing transparency of what data is stored where, and allowing users to see and understand that.

Imagine a future where variable, dynamic identities create a barrier between you and the services that track, isolate, target and manipulate you. Instead of having all your data fully exposed across digital and physical environments, this system would offer online self-sovereignty: you would control your various online identities—including anonymity and pseudonymity—and the system would limit access requests based on sharing controls you’ve set. As your context shifts, so do your data preferences. 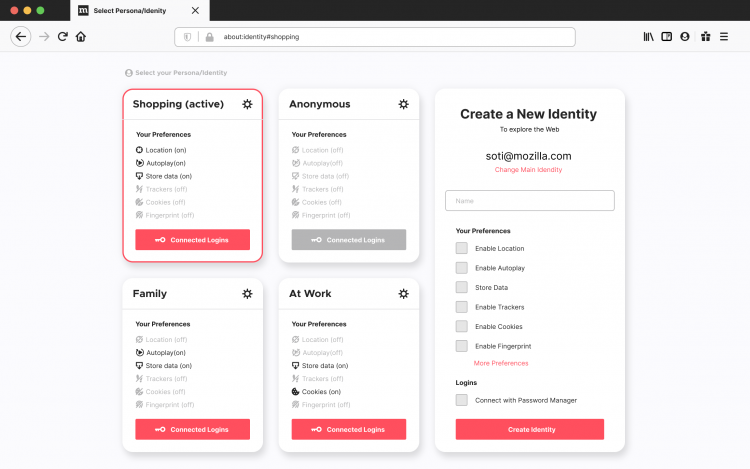 What problem does it solve


Users of all ages increasingly want more contextual, privacy protected lives. This is particularly true for many Gen Z'ers, who prefer platforms that leave temporary digital footprints, like Instagram Stories or Snapchat (favored by 46% of American teenagers), over the town hall of Facebook.


A B2C product where users switch from one persona/identity to another, similar to Netflix profiles. Requests for data access are blocked based on the selected identity. Ultimately, a ‘data agent’ would understand how and in what context to do this for you, seamlessly.

How could we start?


These ideas incorporate feedback and builds from employees and community members at Mozilla's January 2020 All Hands.

“Mix up the steps. Create data storage and ownership. Provide a way to consent to transaction via a commons. Don't rely too heavily on the algorithms to start, make that and opt-in an add on later as a premium service?”

“I think this is valuable at disrupting the cost of the data and making it available to startups. This disruption can kill the market of tracking across website as we can have quality and quantity.”

“Identity is a word which those with privilege identify with. How do you diversify and stretch framing so it appeals to low agency groups too?”

"A lot of the potential partners identified here would centralize ID. Why would we want that?"

Imagine a future where collectives negotiate things like consent, terms of service, and EULAs. For example, citizens of Des Moines could collectively red line and curate how the city can track them and use their data. Or employees of corporations could restrict tracking of their focus and attention. Online gamer groups could take collective action against third party conversation collection and storage. 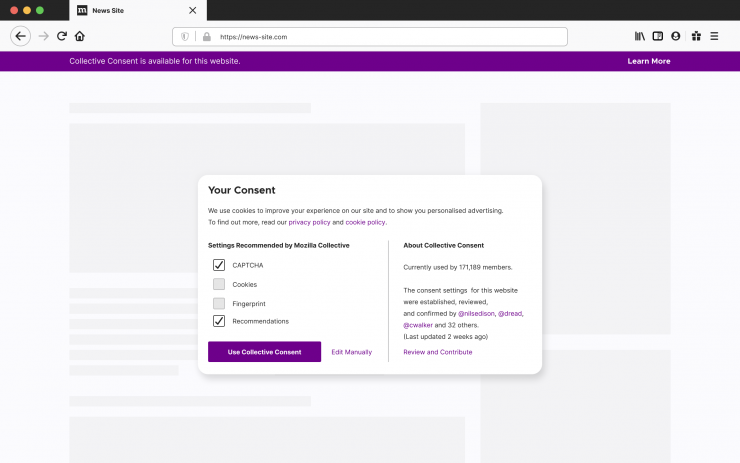 What problem does it solve?


Users have no power, as atomized individuals, to negotiate the terms and conditions of the way surveillance technologies track and manipulate them across digital and physical environments.


A B2C product that associates your identities with various collectives (e.g., your city, your school, your credit union, your peers), creating a path to collective action around consent to restore power balance.

How could we start?
These ideas incorporate feedback and builds from employees and community members at Mozilla's January 2020 All Hands.

"This could save users attention!! Attention is Mozilla’s next ‘privacy’"
"How could we game out the possible consequences of this model so that we don't simply replicate current asymmetries and injustices?"
"What are a community's motivations and incentives around this?"
"Don’t overlook role of individuals consent manager, perhaps as a starting point"

Imagine a future of trusted digital intermediaries, enabled by intelligent gathering, collation, and presentation of users’ identities. This differential data agent would negotiate value exchanges with service providers (be that a server, an IoT device, or smart city elements) on behalf of the user—and even their collectives—based on set priorities, preferences, and contexts.

What problem does it solve?


For users, computational agents that support individuals’ needs through collective action could inject both convenience and trust. (Note that CCPA regulations somewhat recognized the likelihood of such 'authorized agents')

For companies, allows them to use data from a large group of people without being exposed to the compliance risks of being responsible for that data.


A B2B product where collective consent can understand where exposures are for both sides of the marketplace—becoming the collective mediator. By gaining a critical mass of company exposures, Mozilla could understand and quantify how the data breaches will affect a single business and charge a service fee or consultancy around how to rectify the situation.

How could we start?
These ideas incorporate feedback and builds from employees and community members at Mozilla's January 2020 All Hands.

"We have a potentially important point of leverage (education, movement building) with how we can illuminate the 'black box' of trackers and the companies behind them to Firefox browser users."
"SayMine is a ‘privacy’ vendor based in Israel that kind of does this, but only for Data Subject Access Rights managers. They have future plans to monetise. “Discover what the internet knows about you and control your digital footprint. You decide where your data should or shouldn't be, and we'll make it happen.”
"Look at Jumbo, a pre-existing app that maxes out your privacy settings for you across multiple services."
"There is no data privacy awareness in Asia. Why would they use this?"

Bringing new value, transparency, and power to the people through control and ownership.

Mozilla as a Service

Productizing our healthier data practices and infrastructure and galvanizing a ‘better data’ movement.