Once code has been pushed into a GitHub branch and a pull request has been created the WebQA team will be notified. So what happens next?

When doing a code review where should you start?

Who can do a code review?

Who can't do a code review?

Addressing comments in a code review

During the code review

As the submitter, you should:

At then end of the code review

Once the pull request has received the required number of positive reviews (usually one or two), you should squash your commits locally if you are able to and then push a new single commit to your fork to replace all of the commits that were created during the review process. If you are not comfortable doing this squash then request that it be done by someone else by leaving a comment on the pull request.

Before merging a pull request do the following:

After verifying the above, click the big green "Merge pull request" button in Github, unless you have already done the merge via the command line.

After the merge is complete please watch the next build in Jenkins to ensure that it is green, or at least adds no new failures.

Who can do merges?

There are two suggested ways of squashing commits locally in order to reduce the number of commits in a branch to one before merging the branch into master. The first one, interactive rebase is likely the simplest, so we suggest you try that first.

You will use git's interactive rebase feature to take all of the commits that are currently in the branch and squash them into a single commit.

Note: If all the commits are ones that were added only to the feature branch then you should not run into any issues. If your feature branch includes commits from master that were pulled in during development of the feature, you could encounter conflicts when doing the interactive rebase which you'll need to address. In this case it might be simpler to go with the second option merge with --squash.

Complete the following steps, which should be done from the feature branch: 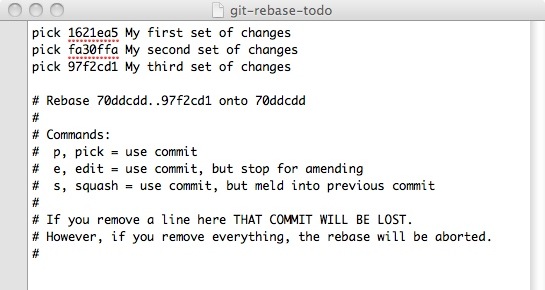 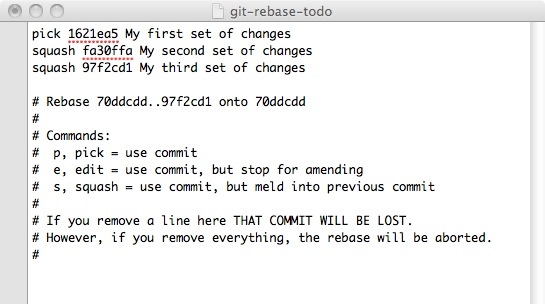 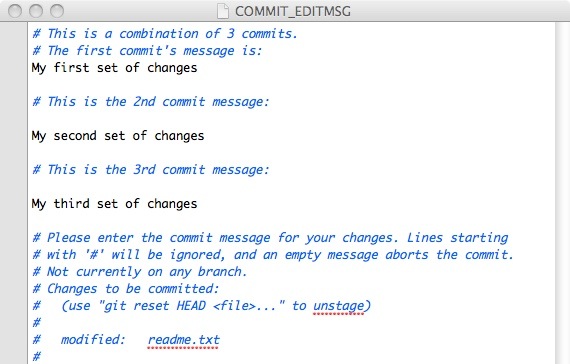 This method is a bit simpler than the above, but it requires an extra step which can be prone to user error. This is because when you do a merge with --squash, you lose the author information, so you need to know what those values need to be and then update them afterwards. Here's an example.

If we have a feature branch called my_branch and want to merge it into master and squash the commits, we would do the following: