These are the results of performance release acceptance testing for FxOS 2.1, as of the Oct 20, 2014 build.

Our acceptance metric is startup time from launch to visually-complete, as metered via the Gaia Performance Tests, with the system initialized to make reference-workload-light.

For this release, there are two baselines being compared to: 2.0 performance and our responsiveness guidelines targeting no more than 1000ms for startup time.

The Gecko and Gaia revisions of the builds being compared are:

Note when comparing to past reports that the test timings changed with Bug 1079700. Baselines for 2.0 have been regenerated with updated timing code, and are faster in a few cases than in the previous comparison. Where this is significant, it will be noted as a faster 2.0 time will be assumed to mean the 2.1 results were also affected by the timing changes, affecting study-over-study comparison.

This initial report has a limited (360 maximum) data point set for 2.0. It will be updated with full results for future baselines and any notable differences (unlikely) will be communicated.

Startup -> Visually Complete times the interval from launch when the application is not already loaded in memory (cold launch) until the application has initialized all initial onscreen content. Data might still be loading in the background, but only minor UI elements related to this background load such as proportional scroll bar thumbs may be changing at this time.

This is equivalent to Above the Fold in web development terms.

More information about this timing can be found on MDN.

These results were generated from 480 application data points per release, generated over 16 different runs of make test-perf as follows:

First, any repetitions showing app errors are thrown out.

Then, the first data point is eliminated from each repetition, as it has been shown to be a consistent outlier likely due to being the first launch after reboot. The balance of the results are typically consistent within a repetition, leaving 30 data points per repetition.

These are combined into a large data point set. Each set has been graphed as a 32-bin histogram so that its distribution is apparent, with comparable sets from 2.0 and 2.1 plotted on the same graph.

For each set, the median and the 95th percentile results have been calculated. These are real-world significant as follows:

Distributions for launch times are positive-skewed asymmetric, rather than normal. This is typical of load-time and other task-time tests where a hard lower-bound to completion time applies. Therefore, other statistics that apply to normal distributions such as mean, standard deviation, confidence intervals, etc., are potentially misleading and are not reported here. They are available in the summary data sets, but their validity is questionable.

Pass/Fail is determined according to our documented release criteria for 2.1. This boils down to launch time being under 1000 ms.

Median launch time has been used for this, per current convention. However, as mentioned above, p95 launch time might better capture a guaranteed level of quality for the user. In cases where this is significantly over 1000 ms, more investigation might be warranted. 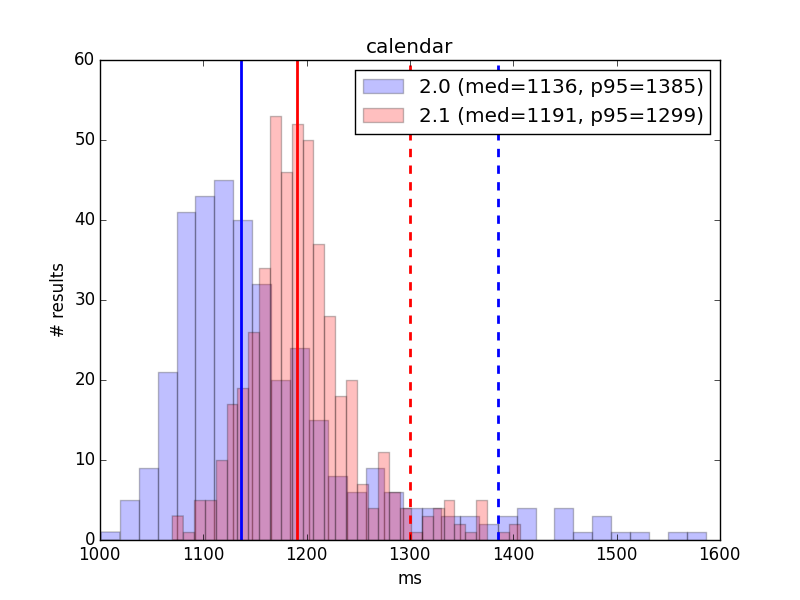 Comment: Calendar's times showed an improvement from the last study, coming out about 75 ms ahead. However, results still show a small regression from 2.0, and remain well over the 1000 ms guidelines, even for best case.

The p95 behavior has improved as well, both over the last study and 2.0, suggesting an overall better experience. 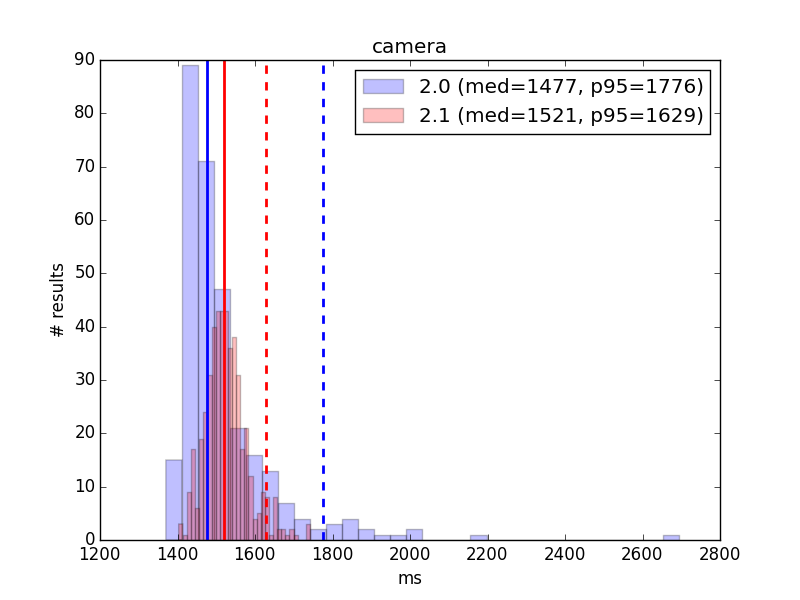 Comment: Camera's 2.1 results have improved by ~50 ms from the last study.

While Camera does show a ~50 ms regression from 2.0 per these results, investigation by the developers have shown this to not reflect an actual regression. Rather, the investigation found that a change in how the calculation was made occurred between the two branches, and that Camera's real-world performance has actually significantly improved between the branches. It does remain over the absolute release acceptance guidelines.

The p95 behavior has improved significantly from both the last study and the 2.0 results, and is now closer to the median behavior. This suggests more consistent performance. 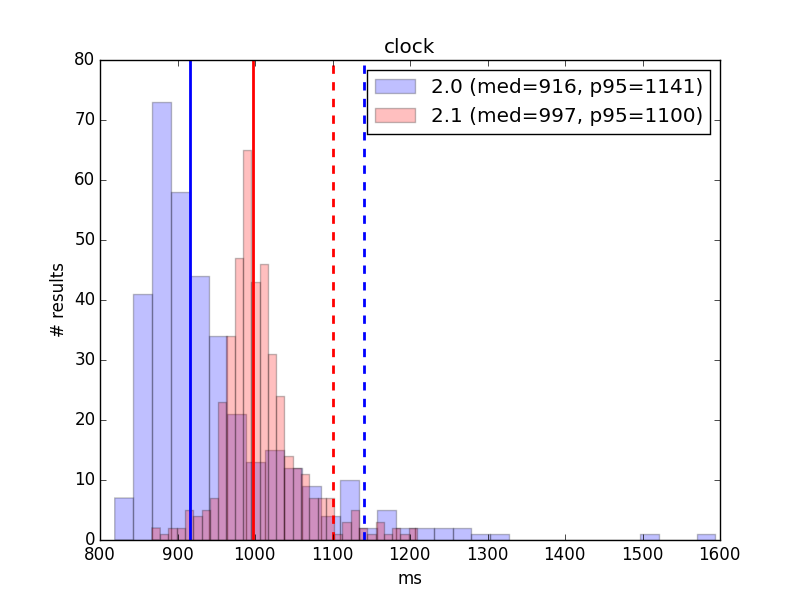 Comment: Clock's median startup performance has improved from the last study by nearly 50 ms. The improvement is sufficient to put Clock barely within acceptance guidelines, though it does still show an ~85 ms regression from 2.0.

The p95 behavior has improved from both the last study and 2.0 and suggests more consistently good results.

Comment: Contacts remains well within acceptance guidelines. While the median (but not p95) has regressed from 2.0, both are significantly better than as measured in the last study and the gap between median and p95 has shrunk, suggesting more consistently good performance. 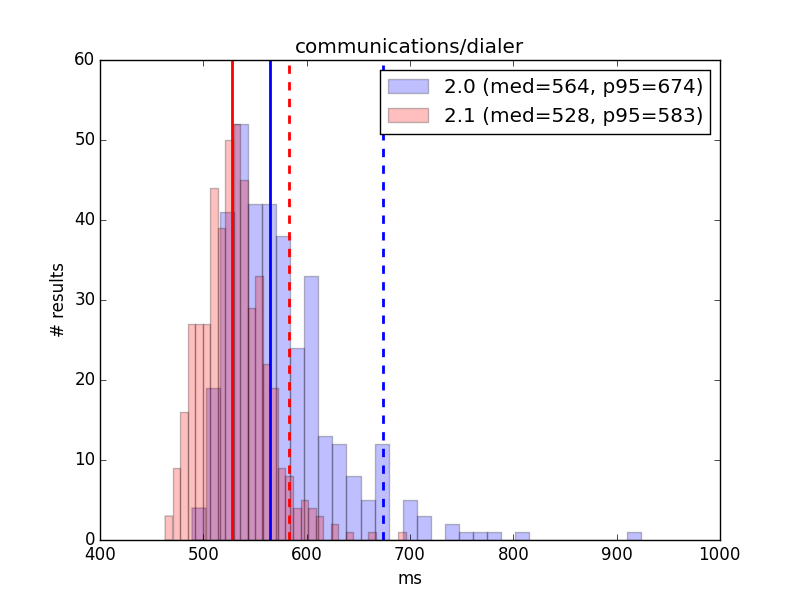 Comment: Dialer remains well within guidelines. Even so, its median startup has improved significantly since the last study, by over 100 ms, and is now faster than 2.0. Its p95 performance improved even more, by almost 150 ms, suggesting more consistently good performance as well. 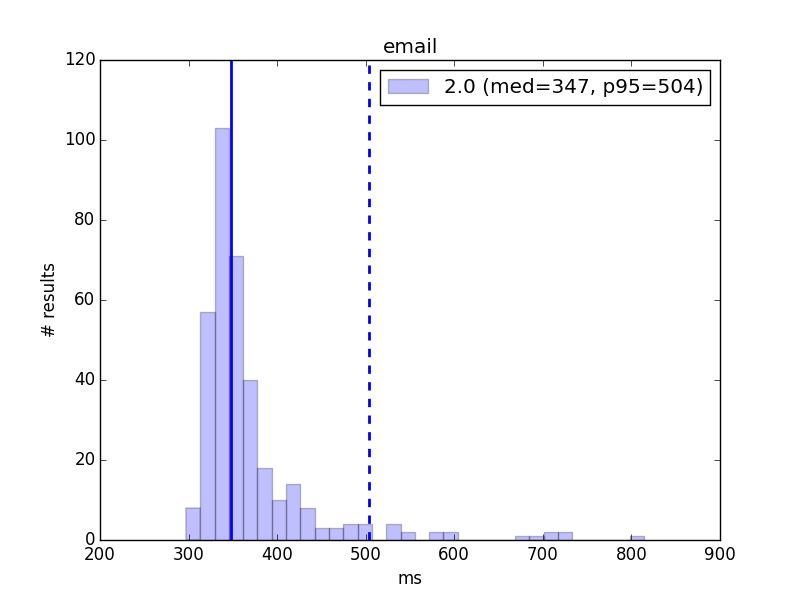 Comment: Email has been removed from the 2.1 test manifest. New 2.0 baseline results are given here, but this application will be eliminated in future reports unless the test is restored.

However, 2.1 is almost certainly well under launch requirement guidelines with this test and should not be a concern. 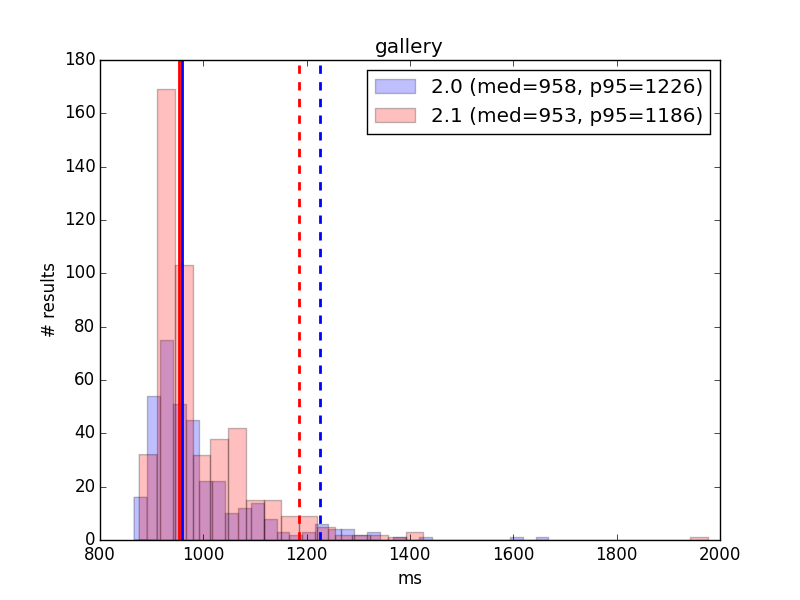 Comment: Gallery's median startup performance has improved by over 50 ms since the last study, with the p95 performance improving only slightly. Performance is now virtually identical to 2.0, and within acceptance guidelines. 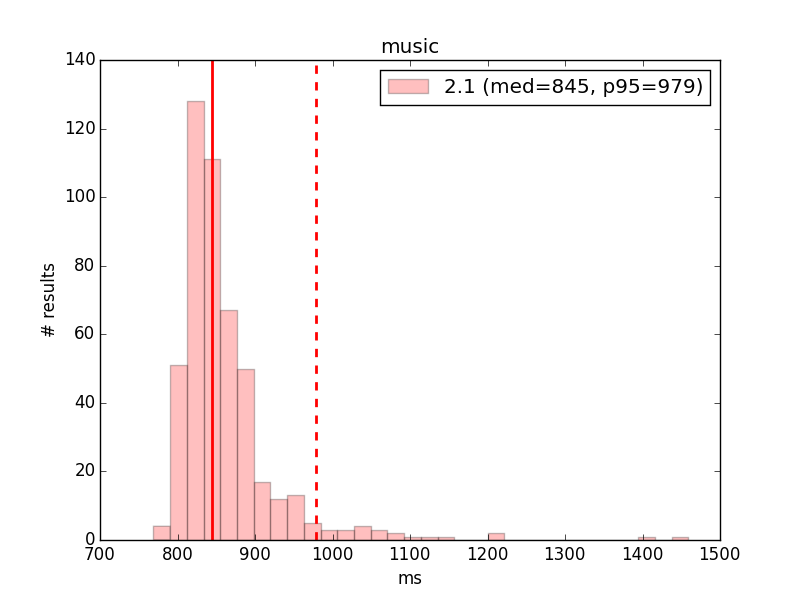 Comment: Music is not tested in 2.0. Startup numbers have improved radically for 2.1 since the last study, by around 250 ms for both median and p95. Results are now unimodal, suggesting that the patch mentioned above fixed timing issues for this application, and these numbers do correspond with the "faster" mode of the previous bimodal results. It is well within release acceptance guidelines. 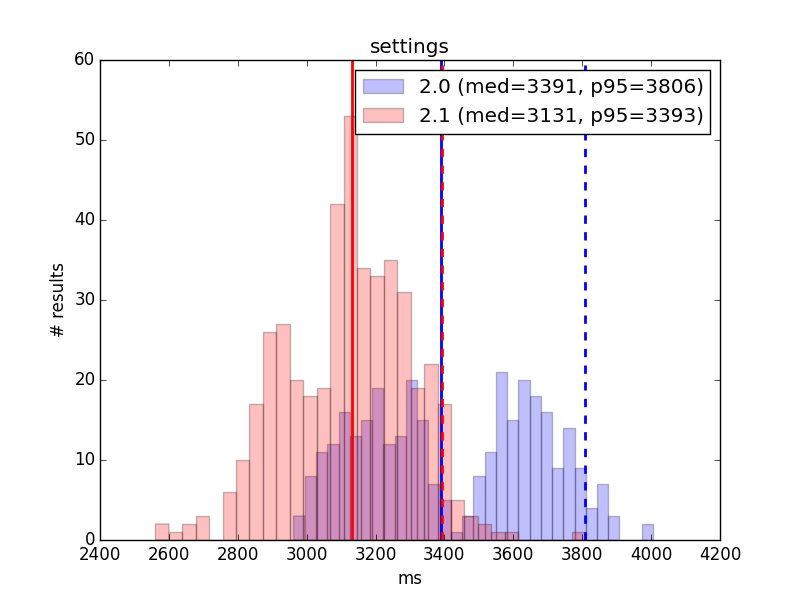 Comment: Settings numbers have regressed radically since the last study, by ~550 ms median and over 600 ms p95. While Settings had previously shown much better performance than 2.0, now it is only somewhat better at median.

Interestingly, the 2.0 numbers remain bimodal even though the timing change that should have fixed bimodality was applied to both branches prior to the study. Also interestingly, albeit possibly coincidentally, the 2.1 numbers now correspond closely with the "faster" mode of the 2.0 results.

Though not shown here, an intermediate (but unpublished) study on 10-17 produced results that were somewhat better (but still regressed from 10-02) at 2577 median/2790 p95. Settings' performance appears to be fluctuating late in the release. 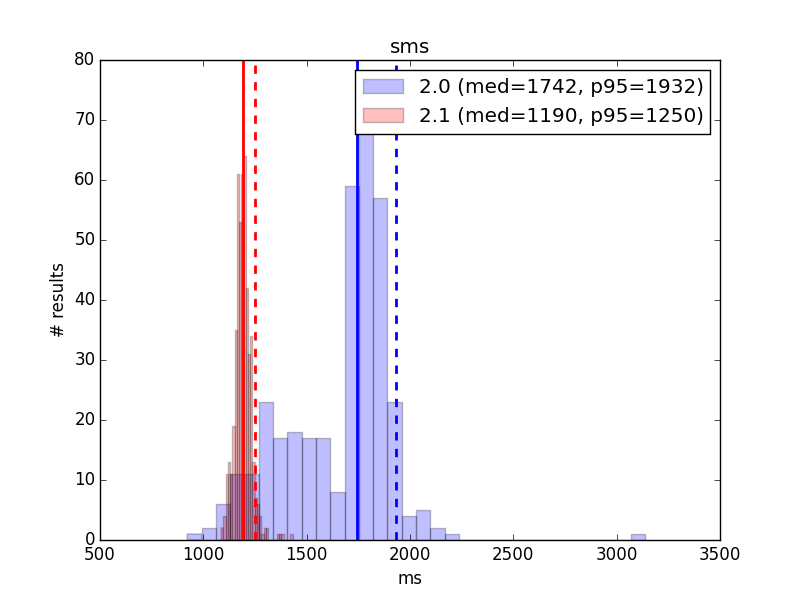 Comment: SMS's results are now unimodal, suggesting the timing fix outlined above did work well for this app. The calculated results are radically faster than in the previous study, showing a nearly 500 ms improvement in median startup time and a similar improvement in p95 performance. The new results are now even better than the "faster" mode of the previous study. They still remain outside the acceptance guidelines, but the gap has been closed significantly. 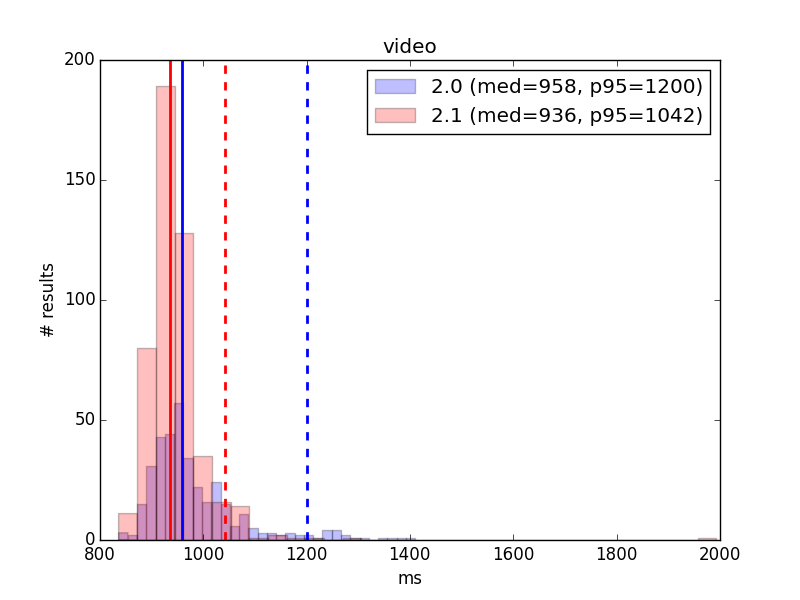 Will be added after full dataset is updated.