A performance automation metric consists of a type of measurement applied to a series of test cases.

Depending on the metric, these may be one basic test scenario applied to a number of apps (such as launch latency testing) or a number of distinctly designed test cases (such as scenarios for memory or power consumption testing).

The workflow for developing a performance automation test case must be more structured than a standard unit-testing or functional-testing development effort. Reasons are:

Our workflow is described in a series of intermediate deliverables. Reviews for validity and result repeatability are inline with other deliverables to ensure each test brings positive value to Firefox OS.

With only a couple of exceptions, each deliverable depends on the last to be completed before it may be started.

Design
Detailed description of the test case's setup needs and procedure, the test procedure, execution details, and results to deliver. This might be for a common scenario, or might be per-case.
Validity Review
Review by test stakeholders for whether the test case design meets requirements and will measure the right thing. Tests that measure the wrong thing can still give repeatable results, so it is important to review the initial design.
Workload
Data (a fixture) to be preloaded into the system under test prior to execution. There are default workflows described at MDN, but some tests may need special-case workflows to be developed.
Instrumentation
Code either injected into or permanently added to Firefox OS or its applications in order to let automation monitor performance details. Some tests do not need this.
On-Demand Test
Test that can be run by a developer on command line, try server, or some other way to test a set of arbitrary code.
Results Review
Review by test stakeholders of a set of results of the implemented test. We sanity check for whether the results look valid (a result frame rate of 70fps on a 60Hz screen would fail this) and whether they are repeatable (reasonably grouped, assuming no code changes). This is also where we can determine or finalize an estimate of test precision, based on real results.
Published Results
Automated results published to a dashboard or similar display. This usually also implies having an automated triggering and execution mechanism (nightly, on-commit, etc.) to generate them.
Documentation
Finalized documentation on this wiki and/or MDN of the test case and its usage.

Below are two graphs illustrating the general workflow.

The first is the general order of operations of developing a performance test case, described in the above deliverables. It is split into three milestones. Milestones each result in a final deliverable, and should be each completed as a whole within a single development effort. However, they can be pipelined or freezered on a milestone-by-milestone basis.

The second is a basic bug dependency tree for a performance test case, assuming one bug per deliverable (including reviews) and that all deliverables are necessary. 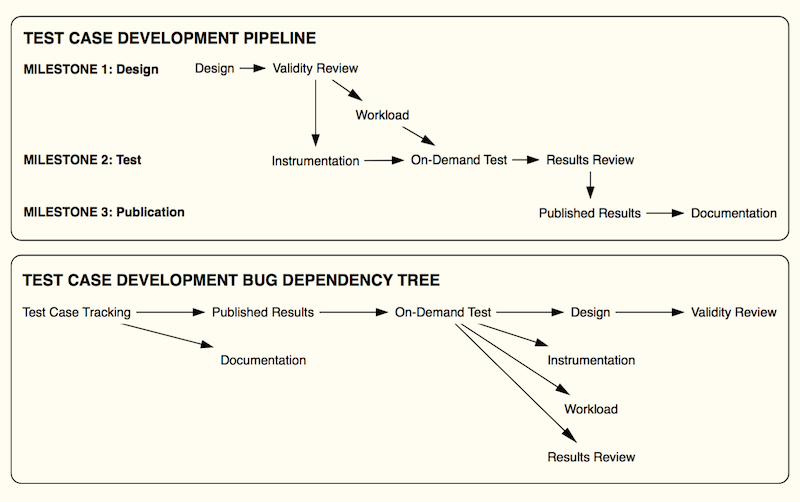