As of March 2020, IRC.mozilla.org has been permanently decommissioned

As of 2nd March 2020, Mozilla has moved away from IRC to Matrix for its public channels and the IRC server was shut down.

This page is being retained for historical and reference purposes only.

IRC stands for "Internet Relay Chat". It's a protocol for real-time chat sessions. (Read more about IRC on Wikipedia.) It was invented before the World Wide Web, so it was adopted by early open source contributors and Web developers, and it has been used by those communities ever since. Like email, no single company controls IRC. IRC servers are offered by many individuals and organizations. Users log in to a particular server to chat with other users on that server, using a client program designed for IRC; just as there are many programs for reading email, there are many different IRC client programs. Chat discussions take place in "channels," which have names starting with a '#' symbol.

Mozilla runs an IRC server to host channels for discussion of topics related to the Mozilla project.

The heart of Mozilla is people. We put people first and do our best to recognize, appreciate and respect the diversity of our global contributors. The Mozilla Project welcomes contributions from everyone who shares our goals and wants to contribute in a healthy and constructive manner within our community

Despite our very best efforts, occasionally people do experience behaviors in IRC that are not inline with our Community Participation Guidelines. If happens to you, please reach out to the channel moderator or use our reporting hotline.

There are several ways to participate in IRC and here are a some common options.

Clients that haven't received updates in a while

Connect to the Mozilla IRC server

The Mozilla IRC server settings are:

Set up a connection as per the screenshot and hit 'connect': 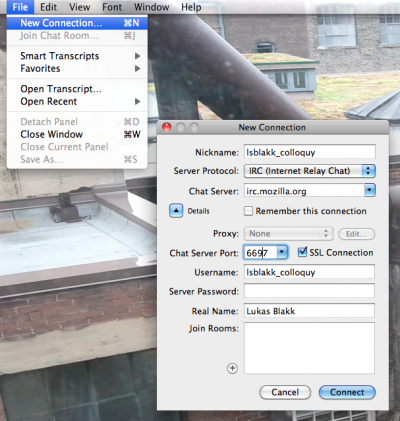 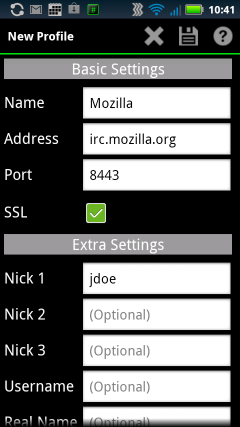 NOTE : In 2012, Verizon blocked all access to irc.mozilla.org over cellular connections. Any connection attempts now get a 504 Gateway Timeout

Nicknames on IRC can become a major part of your identity if you spend a significant amount of time talking with people in IRC. Sometimes you may even find that people in real life call you by your IRC handle. If you're having trouble coming up with a catchy nickname or if you're concerned about getting stuck with something that seems funny now but will be tiresome to you in a few weeks, a good way to create a nickname is to take the first letter of your first and most or all of your last name to make a nick that people will recognize as you.

Often in IRC people look for others by using tab complete so if someone's name is John they might type a 'j' and then tab several times to see who's in the channel whose name starts with a 'j'.

Using just your first name can also be a good option, if it's unique. But:

Now that you're connected to the IRC server, you can set/register your nickname with Nickserv. If you’re going to be hanging around a lot (and we hope that you will!), you will want to register your nickname. That way, other people can’t pose as you on the channel and you can join password-protected channels. First, set your preferred nickname by either doing:

(where NICKNAME is the desired nickname); or if you are using a client you may have already set your nickname and/or can change it through the application's interface. Note that if someone has already registered your preferred nick, you’ll need to use a different one.

Once you have settled on a nickname here’s how to register:

Get the confirmation code from your email inbox. Type the following command and replace confirmation_code with the code sent to you in the email (NEVER replace the word "nickserv" in /msg nickserv ... with your nick). It has the template shown below. If you don't see our email in any folder (check spam too) you could try /nickserv resend .

Congratulations! Your nickname is now registered if you see a message reply containing

"Your email address of [YourEmailAddress] has been confirmed".

Next time you log on, you will need to identify yourself to nickserv as follows (after you get the nickname):

Once you have identified yourself, you will be able to join password-protected irc channels and also, if needed, disconnect anyone using the nickname without the password. See /msg NickServ help for details.

If you have forgotten your Nickserv password, you can have a reset password email sent to your registered email address:

If you do remember your password and just want to change it (after you identify with your nickname):

Using the /umode command with one of the following parameters will cause the specified effect.

IRC channels are like 'rooms' where people talk or hang out. Their names begin with a # (octothorpe, hash, pound sign etc.). Do not confuse them with social media 'hashtags' :-)

For most irc.mozilla.org channels you can join them with the following command:

This will open a tab, window or section in your IRC client that allows you to participate in discussions on that channel.

If doing this command does not open a new tab or otherwise allow you to enter the channel for discussion, please check the steps above about registering your nick and make sure you have identified yourself to Nickserv.

You can start a private chat with another person who is also on irc.mozilla.org by doing

This creates a new tab or channel that is just between you and that person. You must have a message to create the new tab/room otherwise the /msg command will complain that there are not enough arguments.

This will give you a list of all the people in the room you are currently in. To start a private chat, you must be in the room with someone. If you're not sure what room someone is in you can go to the main irc.mozilla.org tab/room and do

which will tell you (hopefully) their real name as well as list the channels they are currently in with that nick.

Create your own channel

To start a channel for multiple people to hang out and chat in, create a unique channel like this:

Now you can tell all your friends, teammates, community members where to find the backchannel you've created!

If the channel you've created is going to be permanent, you'll want to register it with chanserv. Does 'chanserv' sound familiar? That's right - it works very much like 'nickserv' :)

Now that you have registered your channel, let's add some users to assist with channel management. These users are called channel operators. They can be managed through chanserv:

For a list of all channel modes supported by our IRC network, please visit [1]. A list of particularly unique & interesting channel modes follows.

Use chanserv to permanently set a channel's mode:

Being new to IRC can be intimidating. Mozilla's IRC channels are very friendly and welcoming but some of them are geared to teams trying to get things done where others are more relaxed and open to new folks giving IRC or other Mozilla tools a try.

If you're able to connect to IRC and join channels, try asking for help in #introduction, #mozillians, #newbies, #seneca or #coding. The folks who hang out in those channels will be happy to help.

You can also get help from IRC by doing:

This will give you a list of all the IRC commands and then you can do /help [command] to get info on that particular command.

You can also visit irchelp.org to learn about how IRC works, or find a client you can use to connect to the chat server.

/!\ If you're using ChatZilla, note that /help is a ChatZilla command which gets you a ChatZilla answer. In ChatZilla, /commands returns the list of all known commands (including the aliases you defined yourself), and /help command (without the slash before command) gives you help on /command. These are usually enough, but you can get help from the server when using ChatZilla, by using /quote help or (on the Mozilla network) /helpop

How to ask questions on IRC

There are many different irc channels for various topics. If you have ChatZilla, you can just click the provided links below to join that particular channel. For other clients, connect to server irc.mozilla.org and type /join channelname, replacing channelname with the name of the channel (including the leading "#"). All channels use English unless otherwise specified.

These channels are frequently used for discussions regarding development and planning of Firefox and Thunderbird.

Channels in Other Languages

When you connect to our IRC server, you will get portscanned from 63.245.208.159, 63.245.212.23, or 63.245.216.214. This is an unfortunate but necessary step in order to cut down on the number of viruses and other malicious users attempting to communicate via our IRC servers. The portscan is checking for common ports used by known viruses and open proxy servers to ensure that your machine is not infected before allowing you to remain connected. By connecting to our IRC servers, you agree to have your computer portscanned by our server. If you don't like this, don't connect.

Our servers do not keep records of any of your conversations, but anyone in the channels you are in might do so and publish those conversation logs (and some channels are actively logged by users on those channels). If you have questions about this, ask the other users in the channel you are concerned about (every channel has its own culture). In general, you should assume that anything you say on IRC that is not in a private message will be recorded and possibly published somewhere, and even then you are depending on your trust that the person you are sending the message to will not to share it.

Sometimes people say silly or memorable things on our server. We memorialize them forever on the quotes database managed by Tim De Pauw.

If you have access to a host that is always on you can run an irc session on it and connect/disconnect from that session without losing everything. This allows you to keep scrollback, stay present in channels when you are away, and have logs of what happens when you're not around. In this example I will use people.mozilla.org as my host. If someone can add good instructions for setting up a proxy in another way, please do. This tutorial will assume that you have an account on people.mozilla.org (or another server where you can ssh to it and run both 'screen' and 'irssi'), details on how to set this up are below. An alternative is ZNC.

Replace <nick> and <password> with your registered Mozilla IRC nickname and password. The following creates an autoconnect to irc.mozilla.org under the name Mozilla.

Replace #channel with the channel you'd like to add. <pass> is an optional field, used when an IRC channel requires a password.