In the light of technological prowess, mobile manufacturers and mobile application developers have come up with great ideas that have tremendously enhanced user experience. In addition, the future mobile phones should interact with the users in a different way-PET which will bring persuasion, emotion and trust. In order to come up with PET ideas based on mobile for the future we decided to interact with users so as to find their likes and dislikes and most importantly their requirements.

Problem Identified During The Research

Fortunately and unfortunately, most of these problems have been solved one way or the other on the different mobile handset companies. As a result, we sought to find out from users what features they would like to have on their phones. The interesting suggestion that came from one user was for the phone to have the ability to detect the mood of the user and respond accordingly. This concept was considered and developed because of a concern raised by one of our interviewees. This user felt there was a need for phones to be personalized according to users; phones should be able to respond to the moods/emotions of users. We found this idea very intriguing and decided to develop the idea. The essence of this project is to enrich the user experience of mobile phones. Having a phone which can react to your mood provides a different dimension to the user experience of mobile phones.

To design an innovative application for mobile phone for use in the future.

In our data gathering exercise, we interacted with real users to find out likes and dislikes they had concerning mobile phones. This was done through a one-to-one interview. We asked them the following questions:

The personas below were created from the information we gathered during the interaction we had with the users of each brand.

Sheila Sheila is a 22 year old university student who has a very tight schedule. She has never bought a phone herself; her parents usually give her a phone they may not be using. Sometimes she gets relatively new phones and other times she gets old phones. She sometimes has to compete with her siblings for a phone being given out by her parents. She prefers to have an advanced phone than what she currently has. This gives her more bragging rights over her siblings because of the added functionality of the new phone and she likes to show off. Sheila always finds herself between assignments, field work and extra-curricular activities. She always needs to have access to a laptop to do her work. She is a hard working student who maintains at high sense of time. She uses her alarm to keep track of time if she needs to do anything. She also uses the calendar on her phone to remind her of events and anniversaries. She also synchronizes the events on her phone with that on her computer to ensure she has the same schedule on her computer and phone. It has been a part of her upbringing to be punctual to school and to other functions. This is a skill she learnt from her parents who always ensured she got to her destination early. She also needs to check her mail because information about activities and courses are sent through the mail. Sheila once in while listens to music on her phone. She sometimes listens to music when she is bathing in the mornings, most preferably gospel music. She listens to gospel music because of her strong belief and faith in her religion. It also serves as a source of motivation in everything she does. She pays particular attention to the words of the song. Sheila always wants to feel motivated about everything to do. She also has a strong bond with her parents and siblings. This trait was cultivated when she was growing up. Her parents taught her to put family first in all her activities because her family will be the first point of call if she needed anything. Sheila has lived away from home during senior high school and college. In the absence of her parents, she has had to rely on friends who would sometimes disappoint her. Other times too she had the right kind around her. Sheila has come to an obvious truth that her family will not always be with her and she may also not have the right kind of people around her. Having a phone with which she can interact with all the time she thinks will not be a bad idea.

Sheila has a very busy schedule in school. She has four classes in one day and the day gets very hectic. Sheila is able to download a file a file from the internet which she will need for class. She heads to class but no one has the file. She wants to be able to Bluetooth the file to multiple friends via any device which has a network connection. Unfortunately she has to either do it one by one or send it through the emails of her friends. Sometimes Sheila gets home stressed out and she needs to be encouraged or motivated. Since she carries her phone everywhere she goes, she wants her phone to be able to detect her mood and talk to her or play some music. She needs to stay motivated because of the various pressures that exist.

John is a 25 year old security officer who works with a private security firm. Most of the time he guards the gates and property where he has been assigned. John in new to his job and has been working for about a month. His highest level of education is the senior high school certificate. He did not get very good grades and he comes from a poor family. He has to make ends meet to feed himself and provide for his family. John has been working other jobs but this one seems to be his highest paying job so far. He would take the opportunity to jump at another job if he would get a pay rise. John has one phone with internet connection. This phone is a low end phone. Most of the time, he plays games with his phone. Some of the games he plays include Rapid Roll and Towers of Hanoi. All the games he plays came with the phone. He has not tried downloading any games to add to his current collection. He fears that his phone credit will run if he tries downloading any games. He also checks his mails and contacts friends with his phone once in a while. John spends about 2Ghc a week on call credit. John has a post where he sits. John usually works from 5:45am – 5:45pm. John’s phone has a short battery life. He has power supply to his post therefore he is able to charge it almost all the time. John does not plan on buying a new phone or battery. He hopes to manage with the phone he currently uses. He would prefer to get an original battery which is quite expensive as compared to the fake battery. John has three SIM cards. Then include and MTN, Vodafone and Airtel SIM cards. John usually has a schedule for patrolling and as a result, he tries hard to finish what he is doing before he goes round to patrol. If he is unable to finish what he is doing prior to the patrolling time, he puts his activities on hold, finishes his patrol and continues his activity. After working for a couple of months, John has been thinking of a way to monitor activities going on within the place where he guards. This will afford him some time to play more games on his phone.

John has to report for duty very early in the morning. His job begins at 5:45am which means he has to wake up early in the morning. John spends a majority of his time guarding the gates and property where he’s posted. He has to always patrol the premises where he guards. There are existing CCTV cameras in the building where he John wants to be able to connect to the existing CCTV cameras where he guards. This will give him access to activities happening in different places where he guards. John also has a lot of free time and would like to play games or engage in other activities.

Moody is the name we choose. basically when you are using moody for the first time it should take you to the settings before it works.There is sensor in the form of a bracelet that senses the pulse rate. The camera on phone should also detect the mood by taking pictures of the user's face and analyzing it. When we are angry are pulse rate is high, or we frown our face.There are various options that the user has, music,color,pictures,theme and call.We all have favorite songs that make us happy, some colors tend to relax the viewer so does the theme, we all want to talk to someone whenever we are sad for example. Therefore using psychology and technology we can breakthrough to create emotional interaction between the phone and the user.

First screen, uses opens the application. the second screen, the application asks user whether it should select a pattern whenever user is navigating the phone. A pattern using the phone could that a user calls she/her mom all the time, the application may select that pattern and add it to the settings. So whenever the user is sad the app will suggest the user to call mom for comfort. 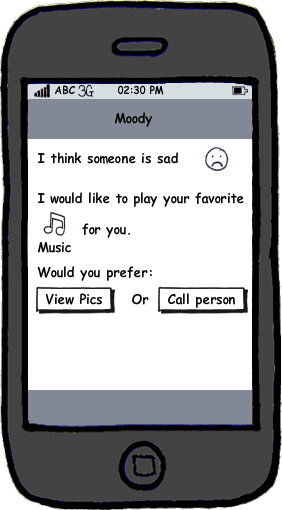 Screen shows the detection of the users' mood. the user is sad, so application alters the user that she/he is sad.The selection gives the user more control on how the application respond. Depending on the time the user might not want to play music so the user just select call person.

After testing the first prototype this is what we got from the participants: Summary of Tests

Changes proposed which will be implemented: - Make wrist sensor with one button to control the application easily. - Cause the wrist sensor to vibrate once a mood has been detected. Some of the participants of the testing process did not give us any constructive feedback so we scrapped their comments. After testing was carried out on Lady-Asaph and Jacqueline, we iterated the design of the prototype and factored in the proposed changes which will be implemented. 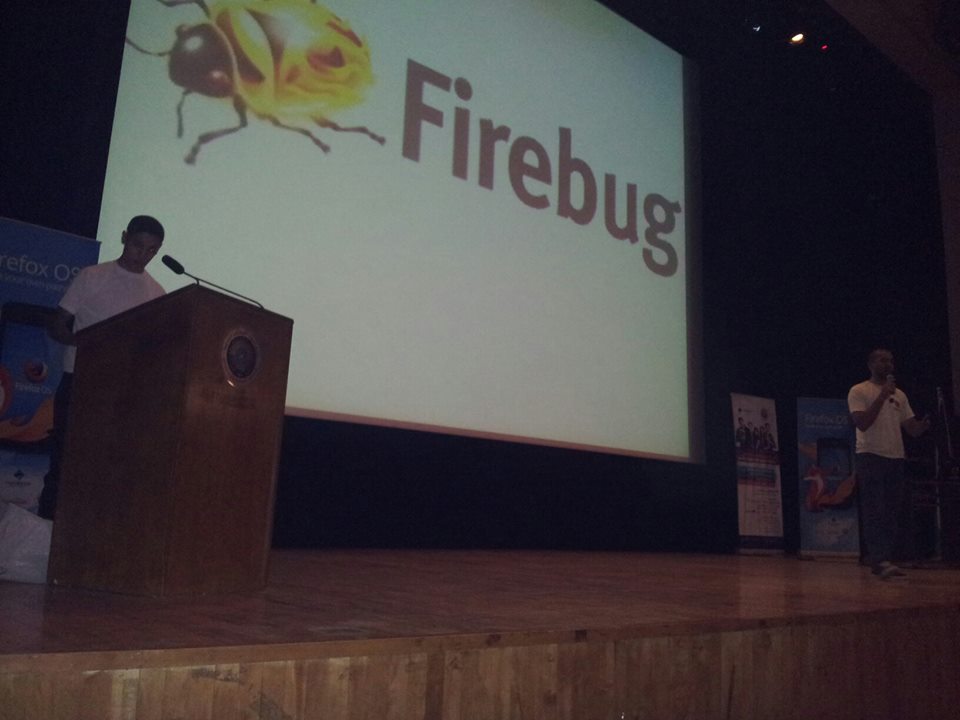 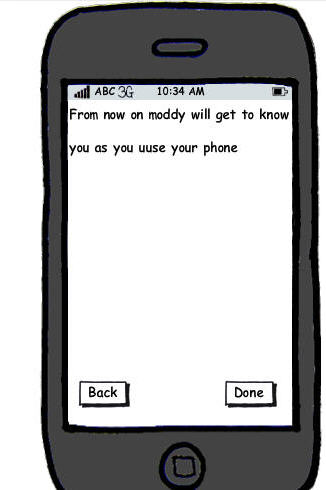 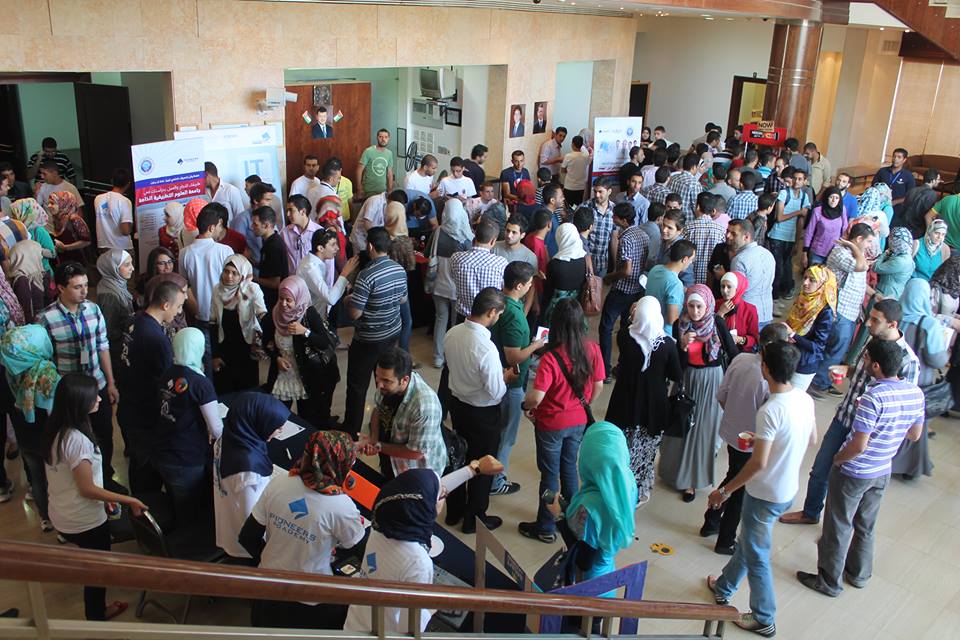 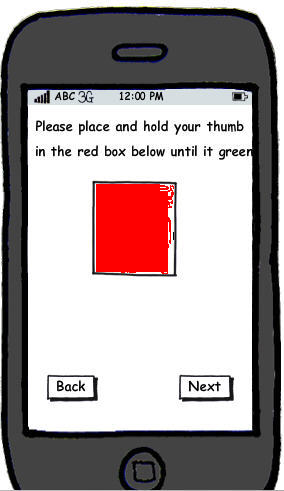 
Hello, Steven, Abdourahmane , Ivan, and Derrick - thank you very much for sharing insights from your project. I really liked it, especially the visual parts. Allow me to share a few more comments here:

Great Job!! Feel free to contact me anytime at thomas@mozilla.com if you have any questions or additional comments. Thanks!