Jetpack is designed to allow casual coders and experienced developers to create useful yet secure functionality that acts on behalf of a user agent (i.e., browser).

By "casual coders" we mean those who know the basics of JavaScript, but aren't previously equipped with knowledge about best practices. They are often self-described as "cut and paste" coders; sometimes they don't even describe themselves as coders at all.

By catering to this kind of developer, the Jetpack Platform needs to protect developers from their own inexperience: put simply, it should be easy to "do the right thing" where security is concerned, and harder to do things that are considered insecure (though not necessarily impossible, since this hampers generativity). 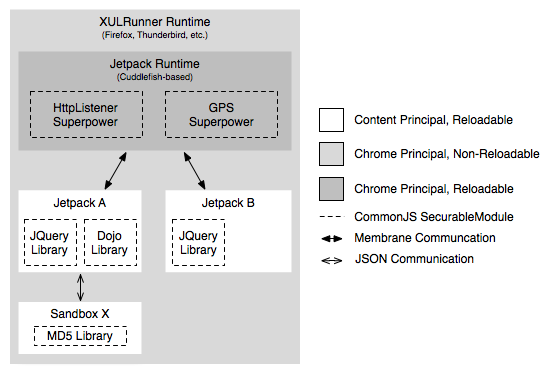 All Jetpacks are executed in their own sandbox and obey the Principle of Least Authority (POLA). That is, by default, their code is executed in a sandbox that doesn't have access to do anything harmful to the user, be it destroying or stealing valuable information.

It's only with the user's consent—or, more preferably, the consent of a trusted security advisor, such as an AMO reviewer—that a Jetpack is executed with the privileges that the user or advisor grants to it. The suggested specification of privileges provided by the Jetpack, along with other non-security-related metadata, is called its manifest.

After the point of execution, it's not possible for a Jetpack to reduce or escalate its privileges, and anything it tries to do that violates its privileges will result in a helpful security error.

Note that it's possible for a Jetpack to also contain its own sandboxes; for more information, see the Privilege Separation section.

Each Jetpack will run in its own Components.utils.Sandbox object with a content principal.

The manifest is essentially used as a high-level specification that guides the injection of dependencies into the Jetpack's global environment.

For instance, if the manifest doesn't specify that the Jetpack needs access to the network, then the XMLHttpRequest object won't be inserted into the Jetpack's global scope—or perhaps a "dummy" object that raises a helpful security error when accessed will be injected in its place.

Alternatively, if the manifest specifies that the Jetpack only needs to communicate with foo.com, then XMLHttpRequest will be injected but attenuated such that connections to domains other than foo.com will fail.

In addition to injecting objects into the Jetpack's global scope, privileged code can also inject objects into the Jetpack's CommonJS SecurableModule namespace. For instance, an alternative to an XMLHttpRequest global might be a "network" module loaded via a call to require("network"), which returns an object that has XMLHttpRequest and other network capabilities attached to it.

Code reuse is a key to a vibrant development ecosystem, but it must also be done with care lest the user's computer be open to attack. Jetpacks can leverage the CommonJS SecurableModule standard to load packages of CommonJS code; these libraries execute in a private scope, but with the same capabilities as their parent Jetpack.

This naturally means that the more powerful a Jetpack is, the more of a threat third-party libraries pose to the user's system. As this becomes the case, library authors are encouraged to use Code Signing to enable their code to be used in highly-privileged contexts, and Jetpack authors are encouraged to use the platform's Privilege Separation functionality to mitigate risk. The security manifest further allows the platform to deterministically recognize when a Jetpack is at risk, and advise the Jetpack author to secure their code before distributing it.

As per the CommonJS standard, a SecurableModule can be loaded via a call to the global require() function.

Libraries will be loaded in SecurableModules with content principals (see JEP 25).

Superpowers are like Jetpack's analog to "native libraries" on other platforms: like traditional XULRunner extensions, they have full access to the Mozilla platform and its accompanying technologies such as XPCOM and XUL, but they are entrusted to expose a small subset of it to the importing Jetpack via dependency injection, perhaps attenuating it as per manifest metadata. This is useful for e.g. traditional addon developers who want to convert their extension to a Jetpack, but require a feature or two that the Jetpack platform doesn't yet provide.

A Superpower is actually implemented using a SecurableModule with a system principal that defines a standard function or class on its exports object. This function or class is responsible for injecting its functionality into a Jetpack. The Superpower's module runs inside a Cuddlefish runtime (see JEP 28), and as such, the Superpower is free to use other privileged SecurableModules provided either by Cuddlefish, itself, or a third party.

Superpowers and other code that executes in a highly-privileged space are encouraged to be signed by a trusted authority such as AMO. This ensures the integrity of the code and means that end-users will be presented with a much friendlier user interface when trying to install the containing Jetpack.

The process for code signing is intended to be as unburdensome as possible. Ideally, adding a signature for code should consist of adding a property to a manifest file or a specially-formatted comment to the top of a script.

Jetpacks provide a mechanism called "Sandboxes" that allow the Jetpack to embed "sub-Jetpacks" within itself, each with its own privilege manifest. The Jetpack can communicate with its Sandboxes via a simple JSON-based message-passing protocol.

The concept of Sandboxes is analogous to the privilege separation functionality many operating systems provide, whereby one highly-privileged process may fork into two separate processes, one of which drops its privileges, and the two communicate via a pipe or socket pair. For examples, see Wikipedia's article on privilege separation.

It's expected that Sandboxes won't need to be used by the majority of Jetpacks: they're essentially a mechanism that allows complex Jetpacks which require lots of capabilities to be able to segment their functionality into separate sandboxes.

Sandboxes all have names, and are accessible through the jetpack.sandboxes namespace.

Each Sandbox will run in its own Components.utils.Sandbox object with a content principal.

For pedagogical purproses and to lower the barrier to entry for developers as much as possible, small Jetpacks do not require authors to create explicit manifests. Instead, the Jetpack Platform performs basic static analysis on the Jetpack's source code to infer its manifest based on what API functions it appears to be using. This automatically-generated manifest is then presented to the end-user or advisor for authorization before the Jetpack executes.

That said, any third-party Libraries or Sandboxes linked to by Jetpacks will need to be expressly given privileges in a manifest; this is done to ensure that the Jetpack author is aware of what privileges they are giving the third-party code. It's also intended as a kind of explicit contract between the user and author of third-party code.

The term "helpful" is used to qualify the term "security error" in this document because it's expected that Jetpack authors will inadvertently encounter security errors when developing their own Jetpacks from time to time, and they will need guidance on how to change their code or their manifest to resolve the error, as well as information on how such a change affects the security of their Jetpack.

Therefore, instead of raising cryptic errors like "Security manager vetoed action", the text of the error should include specific information on why the action violated a security policy and what the developer can do about it.

The exact criteria for how transparent code updates are, and in what cases they are even allowed to occur, is still in flux. The following represents some issues to be considered.

As long as code is signed, updating it should be transparent, as it both relieves the user of the burden of having to authorize trusted code updates and also ensures that they're on the version of their software with the most recent security fixes.

However, if the code isn't signed, and has medium to high privileges, users may need to provide permission to update the code; indeed, we may even need to prohibit code updating on such Jetpacks over non-HTTPS protocols due to the danger of man-in-the-middle attacks, as Firefox's current extension update mechanism does.

In general, Jetpack manifests aren't intended to be read by non-technical end-users. Rather, they're intended to be read by reasonably technically experienced AMO reviewers and other trusted advisors—individuals who, for example, know what DNS and filesystems are but not necessarily what an XPCNativeWrapper or a security principal is.

This audience is expected to compare the manifest with whatever the Jetpack purports to do, as well as take into account any additional social and technical factors, and make a decision about the potential legitimacy of the Jetpack. This decision is then used to advise non-technical users on whether they should trust the Jetpack. This means that if a trusted authority has reviewed the Jetpack, they will sign its code, and end-users will be presented with a relatively benign user interface when installing the software.

However, without even a cursory review of a Jetpack by trusted human beings, the most the Jetpack Platform can do is present the user with some idea of the risk involved in installing the Jetpack. Jetpacks which require high privileges and aren't signed by a trusted authority will thus cause the platform to present the user with a dire warning, and will probably require them to do something fairly cumbersome during installation, e.g. make them type the words "I AGREE TO EXPOSE MY PERSONAL DATA TO THEFT OR DESTRUCTION BY THIS JETPACK", or drag an icon of a syringe filled with murky fluid over an icon of a human being with their inner elbow exposed. Jetpacks which require lower privileges, however, will present gradually friendlier user interfaces prior to installation.

Jetpack authors can bundle their Jetpack in a zip file, in which case a manifest can be placed in a manifest.json file. Alternatively, however, the Jetpack can be a single script that begins with a call to jetpack.manifest.set(), like so: