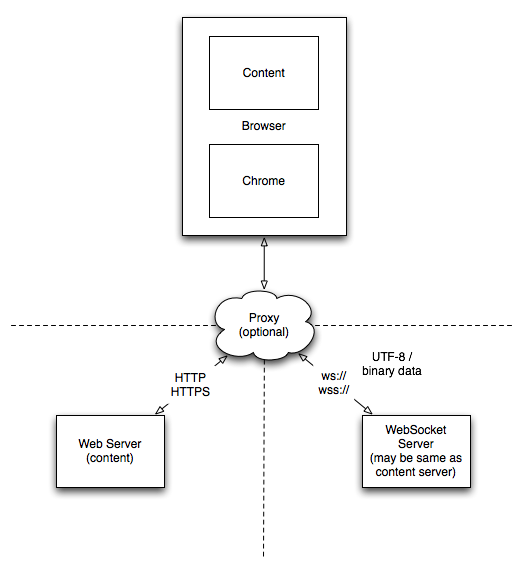 Do sockets check with nsIContentPolicy listeners?

Is HSTS implemented correctly? Does HSTS apply to the whole server or to a specific port? Look at the spec? We do agree that HSTS applies to WebSockets.

Need to audit the code for protocol-specific checks (especially for HTTP(S)) to make sure they were updated for WebSockets. (browser.js for address bar.)

What URI flags are used for WS:// and WSS://? checkLoadURI?

Should we attempt to load an external handler for ws:// or wss:// handler?

Load an iframe that has a websocket connection in it. Does this allow any attacks? Frames. What if the framed document has document.domain set?

Cookies, HTTP authentication, Client certs, need cross-site cookie protection, HTTP-only cookies need to be properly handled. Compare to XHR with CORS. Need to write spec for how cookies are supposed to be handled and then check implementation against that spec. What happens when a 401 response is returned? How does HTTP auth work with websockets? How do client certs work in WebSockets (and XHR)?

Client attacking servers (e.g. server not expecting websockets at all).

Only one connecting connection to a particular host/port pair to prevent DoS according to the TLS spec (in security considerations). Do we implement this? Are there security problems with implementing this restriction? (See also proxy considerations.)

Should websockets be limited by the global limit of the number of connections per host?

What happens on private browsing transitions? Do we send a close frame? Do we wait for a close? Do we clean up correctly/properly?

Can Chrome use websockets? If so, what principle gets sent? What happens when add-ons use it? What cookies/HTTP auth/etc.? Can JetPack get WebSockets access? Do we need to enable JetPack access?

Can Workers use websockets? If so, what principle gets sent?

URI parsing needs to be checked to make sure we are parsing WS:// and WSS:// URIs correctly, and not mis-interpreting HTTP URI constructions. Should be be silently stripping fragments? Are we?

What happens when we unregister callbacks? Need to make sure we don't crash on receiving data or any other notification that would cause a callback to be called.

Reusing connectoins deemed problematic. Need to understand how we would handle data after client closed connection and/or server indicated that it closed the connection and isn't intending to send more data, so that we don't interpret any following data as a response to a future request.

Need to handle server flooding us with data. Need to implement a maximum receive buffer size. Also, buffer size is increased linearly, instead of geometrically.

Similarly, clients trying to send too much data that isn't being recv'd by the server, we don't want to DoS ourselves. Does the W3C spec have a way of saying "you are sending too much data; back off?" Is this implemented? Can this lead to OOM unnecessarily? It seems the spec is bad, because it doesn't expose the max buffered amount.

Spec wierdness: "If the connection is closed, this attribute's [bufferedAmount] value will only increase with each call to the send() method (the number does not reset to zero once the connection closes)." What happens when you send data in closed state?

Can XHR now add WebSockets headers (for redirects) now that it couldn't add before we implemented WebSockets?

Do we support wss://? Do we allow mixed-content https:// + ws://? Should we? We don't need it for any backward compatibility, would be good to prevent mixed content from the start (i.e. only allow wss:// when the document is https://)

Does CSP apply to websockets?

What is the current thinking about WS security in general, in the security research community?

Proxies: Do we correctly detect proxies (and LSPs) trashing the websockets connection? What happens when a regular HTTP response is returned for ws://? Response smuggling? - ^^ all handled by threat modeling and test coverage reivew no websockets data flows until the HTTP boostrapped handshake is complete.

Concatenate origins in headers on redirect.

Possible that connection will fall back to SSL 3.0 without SNI extension.

Key used to protect against cross-protocol attacks is not random (patch pending review).

"Act as if the user agent had received a set-cookie-string for the document's address, consisting of the cookies set during the server's opening handshake. [COOKIES] [RFC3629] [WSP]" - This part of the spec is wrong, need to make sure implementation doesn't implement wrongly spec'd semantics.