We have a variety of branches at Mozilla, here are the main ones that we see alerts on:

Linux and Windows builds have PGO, OSX does not.

When investigating alerts, always look for the Non-PGO branch first. Usually expect to find changes on Mozilla-Inbound (about 50%) and Autoland (50%).

The volume on the branches is something to be aware of, we have higher volume on Mozilla-Inbound and Autoland, this means that alerts will be generated faster and it will be easier to track down the offending revision.

A final note, Mozilla-Beta is a branch where little development takes place. The volume is really low and alerts come 5 days (or more) later. It is important to address Mozilla-Beta alerts ASAP because that is what we are shipping to customers.

Coalescing is a term we use for when we schedule jobs to run on a given machine. When the load is high these jobs are placed in a queue and the longer the queue we skip over some of the jobs. This allows us to get results on more recent changesets faster.

This affects talos numbers as we see regressions which show up over >1 changeset that is pushed. We have to manually fill in the coalesced jobs (including builds sometimes) to ensure we have the right changeset to blame for the regression.

Some things to be aware of:

Here is a view on treeherder of missing data (usually coalescing): 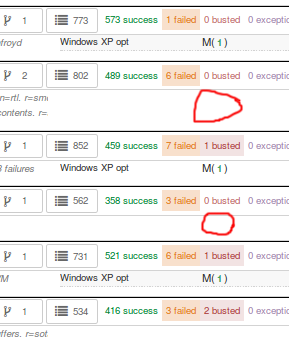 Note the two pushes that have no data (circled in red). If the regression happened around here, we might want to backfill those two jobs so we can ensure we are looking at the push which caused the regression instead of >1 push.

What is an uplift

Every 6 weeks we release a new version of Firefox. When we do that, our code which developers check into the nightly branch gets uplifted (thing of this as a large merge) to the Beta branch. Now all the code, features, and Talos regressions are on Beta.

This affects the Performance Sheriffs because we will get a big pile of alerts for Mozilla-Beta. These need to be addressed rapidly. Luckily almost all the regressions seen on Mozilla-Beta will already have been tracked on Mozilla-Inbound or Autoland.

What is a merge

Many times each day we merge code from the integration branches into the main branch and back. This is a common process in large projects. At Mozilla, this means that the majority of the code for Firefox is checked into Mozilla-Inbound and Autoland, then it is merged into Mozilla-Central (also referred to as Firefox) and then once merged, it gets merged back into the other branches. If you want to read more about this merge procedure, here are the details.

Here is an example of a view of what a merge looks like on TreeHerder: 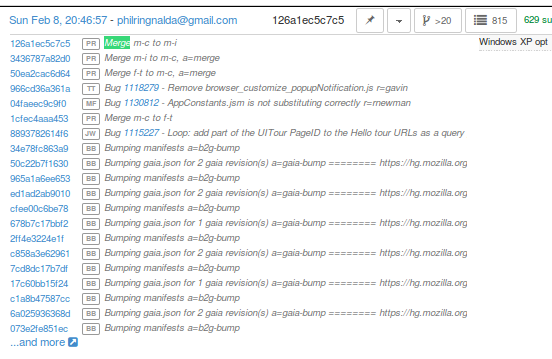 Note that the topmost revision has the commit messsage of: "merge m-c to m-i". This is pretty standard and you can see that there are a series of changesets, not just a few related patches.

How this affects alerts is that when a regression lands on Mozilla-Inbound, it will be merged into Firefox, then Autoland. Most likely this means that you will see duplicate alerts on the other integration branch.

What is a backout

Many times we backout or hotfix code as it is causing a build failure or unittest failure. The Sheriff team handles this process in general and backouts/hotfixes are usually done within 3 hours (i.e. we won't have 12 future changesets) of the original fix. As you can imagine we could get an alert 6 hours later and go to look at the graph and see there is no regression, instead there is a temporary spike for a few data points.

While looking on TreeHerder for a backout, they all mention a backout in the commit message:

Backouts which affect Perfherder alerts always generate a set of improvements and regressions. These are usually easy to spot on the graph server and we just need to annotate the set of alerts for the given revision to be a 'backout' with the bug to track what took place.

Here is a view on graph server of what appears to be a backout (it could be a fix that landed quickly also):

PGO is Profile Guided Optimization where we do a build, run it to collect metrics and optimize based on the output of the metrics. We only release PGO builds, and for the integration branches we do these periodically (6 hours) or as needed. For Mozilla-Central we follow the same pattern. As the builds take considerably longer (2+ times as long) we don't do this for every commit into our integration branches.

How does this affect alerts? We care most about PGO alerts- that is what we ship! Most of the time an alert will be generated for a -Non-PGO build and then a few hours or a day later we will see alerts for the PGO build.