NOTE: The extension is no longer going to be supported post completion of the Web Apps Integration to Desktop feature. See that feature under QA to see up to date testing on that Firefox web apps feature. This wiki exists for historical purposes of past testing on the extension.

Here is a quick start guide to help you dive right in to Open Web Apps:

Once you have apps installed, you can launch them by clicking on them in the Dashboard. You can re-arrange the app icons and you can delete them from the Dashboard as well. You can also go to 'about:apps' (type this without the quotes in the URL bar) and launch apps there, view the manifest or delete apps.

The following list summarizes the major areas of testing for OWA extension:

Future areas of concern include the following:

Bugs are reported under the "Web Apps" product in the "Extension" component. Below summarizes important links for viewing and reporting extension bugs.

Note: See How to Write a Proper Bug on how to report bugs.

Note: A tracking bug was used for tracking the alpha release of the extension in the past.

The following summarizes the build verification process for the extension:

The automation efforts will revolve around automating the manual test cases using mozmill. Since currently there is not much to work with, a basic skeleton framework is being looked into that can hopefully hold common API's that will be used when automating the test cases.


A demo test run was created with MozMill that installs an app, runs the app, closes the app and then deletes it. The patch for the demo test can be found here. Henrik Skupin is going to write a blog post about OWA automation and will include a demo that runs this script.

An already existing nodejs server was modified to host test apps that we can use for load and smoke testing. To use the test server, please follow these steps (in linux): 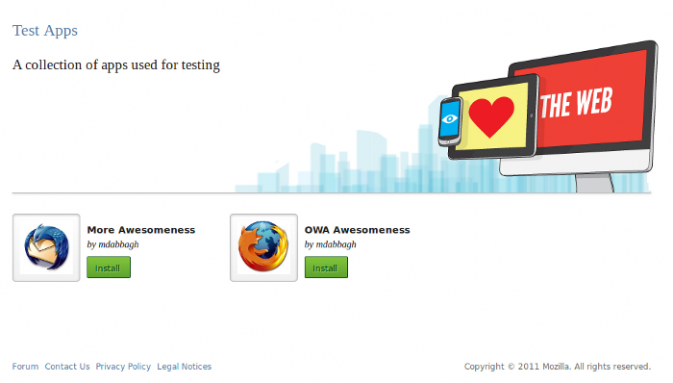 It's just a nodejs server that creates a separate server for each app that we have and hosts the necessary files within each server. The directory where the apps are stored is in site/tests/apps and each app has a folder within this directory.If you would like to add apps, all you have to do is add a folder within the apps directory and place the necessary files within that folder (please look at repo under site/tests/apps/ for examples). Please note the following:

Native app generation just means allowing the user to install apps natively on their machine. This is equivalent to installing a program or application. If you would like to check it out, please follow these steps (advanced) or simply install one of the extensions from here:

The latest developer builds for the OWA extension can be found here. For the faker extension builds, go here.

The developer builds are created whenever a commit is made to the openwebapps github repo. The format is openwebapps-<commit id>-<date>.xpi. For automation, openwebapps.xpi within the 'latest' folder is used to avoid making changes to the addon.ini file for every test run. To build the extension yourself from the github repository, please do the following: