Martin Best started the Bugzilla Anthropology Project, which initiated a need for dashboarding the vast repository of information contained in Bugzilla. Metrics has setup an ElasticSearch cluster with all the historical meta data on the bugs in Bugzilla. This includes data on security bugs. Mozilla now has views of this data

We would like to increment on existing ETL. Unfortunately, the complexity of the installation may reduce the number of interested community members. There are six languages involved: 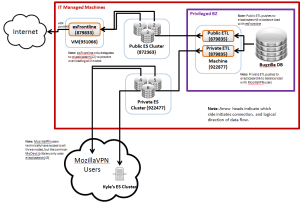 Two Clusters: One Public and One Private

I believe a Python re-implementation of the existing code benefits community involvement by making the installation procedure simpler, and benefits the ongoing enhancement to code base by enabling unit and functional testing:

The Python ETL is a now functional enough for use. The various servers for the public facing bugs has yet to be setup.

This project took more effort than expected. Here are some of the complications that slowed down development. Please keep in mind I only had a couple months of Python before doing this conversion, feel free to take pleasure at my ignorance:

In the end we have a high speed ETL solution that is easy to install and execute. There are plenty of improvements that can be made, and definitely in the area of more threads and more multiple processes. But those can wait while we deploy.

Over this past couple of months security reviews have been completed, and the suggested enhancements have been implemented.

As humans, we know what happened here: Kyle (me) changed his email address (somewhere between Jan2nd and Jan4th), and then removed himself from the CC list for the bug. The ETL script has no such domain knowledge, and simply sees an inconsistency. A naive rebuilding of the CC list history would have to assume kyle@lahnakoski.com was in the CC list since the beginning (which is a legitimate situation, but uncommon, for the first snapshot of a bug). In aggregate, with all these mismatches, the naive rebuilding of historical record resulted in concluding many bugs started with long CC lists, that were eventually paired down over time to what currently exists. This pattern is quite opposite of reality; where a bug starts with usually few people and the list grows.

More complex cases involving simply more equations and more unknowns: Then we solve the system of equations. Lucky for us this is not as hard as algebra class because we have many more equations than we have variables to solve for: Finding a solution does not require all equations, and this helps us with the problem of corrupt history.

Corrupt history? - Yes, the older Bugzilla history is slightly corrupted, which can effect the solutions to these equations. To mitigate this problem, the solutions go through a voting stage to help determine what is the truth. In the case of this alias analysis: I found at least three systems of equations where a solution is found, and that same solution has been found twice as often as any other, then I know there's enough evidence to conclude I have the right solution (one email address matches another).

With alias analysis done, the CC list history looks like they should: Small CC list at the start of a bug's life, growing over time. The alias mapping that results is also used to match review flags (which is another story).

Bugzilla contains some bugs that should not be made public. These include bugs with specific security concerns, but also infrastructure specific details and other sensitive items. It is important that these do not leak. Making unit and functional tests is not enough because they can only test the known unknowns. The unknown unknowns are inevitable in any code with reasonable complexity and you can not test for those explicitly. Instead I want to perform the easier task of testing against invariants:

To check these tautologies I require datasource that knows what is "private" -- the private cluster has this! It is a simple matter of writing queries that ask for all private entities and check if any are in the public cluster. These queries are computationally expensive because they scan the whole datastore, but the queries are simple enough to be proven correct. Furthermore, these queries can be run outside the main ETL program, allowing us to phase out these expensive checks when we are confident the ETL code is correct.

Code to Look for Leaks

My biggest mistakes were in time estimation. Generally, I underestimated communication/coordination overhead, which can be significant:

all takes time; a couple of days at least. Compare this to development: where you can squash a bug in an hour.

Another issue, mentioned above, is the extra effort in adding tests to the code-base: More tests => more test code => more bugs in test code => more bugs found in production code => more tests. A very good thing for sure, but I should have recalled from my past that tests account for 2/3 of coding effort. I should have tried to estimate the effort to rewrite the existing code, then doubled it to get an estimate for writing the testing code. I had lazily glossed over that non-trivial amount of effort.

Finally, Python has idiosyncrasies, and the bugs caused by utf8/latin1 were the most time consuming.