See the Tree Rules before pushing patch into any repository. 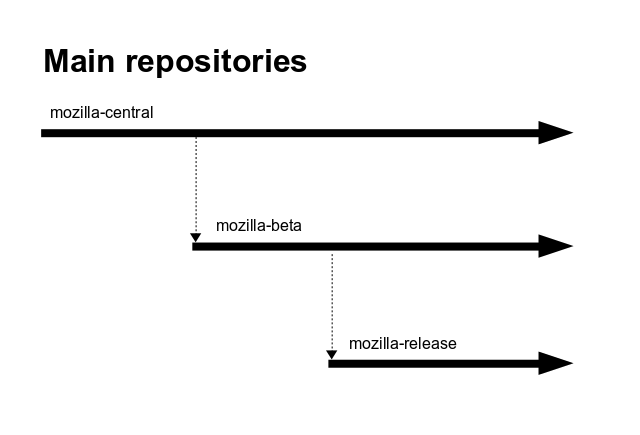 Get the latest version of Firefox for Windows, macOS or Linux across all channels and check the Release notes for new features, enhancements or changes.

You can get the latest release, beta and Nightly versions of Firefox for Android on the Google Play Store.

Release day activities/checklist can be found on the Release Day wiki page.

Our release schedule is meant to be flexible and we may occasionally modify the length of a cycle to be shorter or longer than the 4-5 week cycle mentioned. Check the Release Calendar to stay updated with the upcoming branch dates.

The last few days of the nightly cycle, before merge day (when mozilla-central is merged into the mozilla-beta repository and a new release cycle starts), is a nightly soft code freeze, meaning that developers should not land on mozilla-central code that is deemed risky for the stability and general quality of Firefox and that features that are controlled by a pref and were not activated during the nightly cycle should not be activated during this week.

If you land code that introduces new crashers or lowers the overall quality of Firefox during that period, we will back it out instead of waiting for a follow-up fix.

1) If you think a bug needs to be addressed in a release:

2) Members of Release Management go through all the bugs nominated for tracking and if in agreement that this bug needs to be investigated in that release we will go ahead and set tracking-Firefox XX: +. Once we track a bug for a particular release we will make sure to follow-up on the progress or help with any road blockers till you have a patch nominated for approval.

Note: Bugs denied for tracking-Firefox XX are still important. It merely means based on the information we have now,we do not feel the bug would prevent us from shipping a release. If new information comes to light, you need help getting more data before you can make the case for us to track, or you disagree with our assessment feel free to renominate again with additional justification.

3) Once you nominated a patch with approval-mozilla-beta/release: ? we will evaluate the information given in the attachment request we may either approve/deny/request more information. Once you get an approval , i.e approval-mozilla-beta/release: +, sheriffs or release managers will land it on the corresponding branch and mark status-Firefox XX flag to fixed, making sure Treeherder is green.

Note: In the case that a tracked bug is resolved as a duplicate bug, it is best practice for the release management team to remove the tracking flag from the duplicate bug and add it to the active linked bug.

Following are the queries that Release management goes through almost day-day to make sure we are tracking the right blockers,getting them fixed and make sure these bugs get fixed (heard of nag emails yet:) ? ) for a particular Firefox release.

Please check the Release_Management/Release_Notes_Process#What.27s_New.2FKnown_Issues_Section_Candidates Release Notes documentation for the process we currently have to construct release notes. Below are the links to all the existing release notes across all channels.