You've probably noticed that BMO has a lot going on. We'll now delve into some more details of various definitions, features, and processes in BMO.

For people working on Firefox, please see the Bug Handling section in the in-tree documentation for information on how to triage and make decisions on bugs.

Finally, this is a work in progress (and may always be, since BMO is improving all the time). There are many stubs (indicated by italics).

To fully use all of the features of bugzilla.mozilla.org and most importantly, to file a new bug you will need to create an account. Currently there are two ways to do this.

From the homepage, click "new account," which will let you create an account directly. You will need a valid email address. An email will be sent that will provide a special link you can follow to finish the account creation process. You will be able to enter your own private password.

Note: If you have previously created a local account as described in the first method above, and then decide to use GitHub to login later, just make sure the email address you have registered in GitHub matches the email address used to create the local account. Otherwise, a separate account will be created which is likely not what you want.

Omg, so many ways to search; why do we have so many, and how do they work?

Quick Search rocks! You should use it.

Advanced search looks hardcore, but the rewards for learning how to drive it are plentiful. Also, pronouns are amazing.

In case you were looking for more ways to search.

Bugmail is the common term for automated emails from BMO. The biggest source of bugmail is changes to bugs, but BMO may also email you reports and other notices.

Too much bugmail? Filter on BMO itself and/or via x-headers!

GMail's ability to filter on headers is somewhat limited. We've got a separate, complete guide on advanced bugmail filtering with GMail.

Bugzilla isn't as user-centric as many modern web apps, but we've added a few features in the last few years.

By selecting My Profile from the dropdown in BMO's header, you can see a collection of statistics about your interactions with BMO. You can use the Search field at the top to see the profile of any other BMO user. Clicking on a user's name in a bug view also provides a link to that user's profile.

There's a project page about User Profiles which has brief description of the fields.

A user's comments will be tagged as "New to Bugzilla" under the following conditions:

The "New to Bugzilla" indicator doesn't mean this account was created recently, it's an indicator that this user hasn't used Bugzilla much, please tailor your responses accordingly.

This is only displayed to people with canconfirm or editbugs access.

Bugzilla bugs have a lot of fields that allow for classifying types of bugs. This also allows for easy grouping and searching for specific bugs. Most of the standard bug fields are described here.

Some users can edit comments made on bugs, if you do so, please follow our guidelines.

Keywords and the Whiteboard

What are all these keywords and weird whiteboard stuff? What is a whiteboard anyhow? Which should i use?

Keywords: These are a limited set of keyword tags, set by teams and people with admin privilege. You can start typing a tag and get a dropdown menu of all the keywords currently available. Keywords like "regression" and "crash" are used by engineering, release, and QA teams, for example.

Whiteboard: The whiteboard field is for free tagging. It's used both by teams and by people who want to track bugs they're interested in. 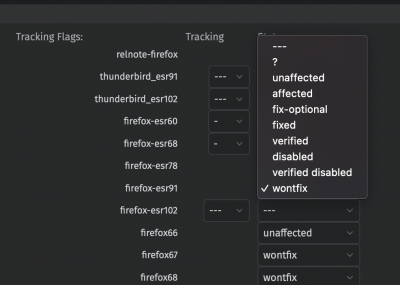 Who's doing the tracking? Should i even set these flags?

Tracking flags are used by developers, triagers, QA and the release management teams to keep track of bugs whose fixes are slated to go into a particular product release. A tracking flag shows whether a bug is being investigated for possible resolution in the Firefox XX release. Bugs marked tracking-Firefox XX are bugs that must be resolved one way or another before a particular release ships. Release drivers will track and shepherd the bug until it is determined the bug no longer impacts the release.

Tracking flags have the values:

Most users will only be able to nominate a bug for tracking by setting the tracking flag for a release to ?. The Release Drivers group (which includes Release Management) will respond to the request for tracking.

For example, a search for tracking Firefox Beta and "+" would list the bugs which release managers decided to track for the Beta release of Firefox.

If you would like to suggest a bug and its fix be considered (by release managers) for a particular release, edit the bug and set the tracking flag for that release to ?. This is often done for a bug that's been fixed in one release channel but needs to be uplifted to another.

Refer to these guidelines on setting the tracking flag.

A flag which represents the status of the bug with respect to Firefox XX.

Approval Flags: Set on the attachment of a bug All patches landing on mozilla-beta/release/esr branches must have these nominated by setting a  ? flag.
Please make sure to fill in the populated list of questions [Approval Request Comment] that come up on the attachment. This helps Release Management understand the user impact & the risk/reward analysis before we grant or deny approval. If this form is left incomplete it will be sent back to you for completion.

Status flags detail, at the release level, if a bug is present or will be addressed in a particular version. 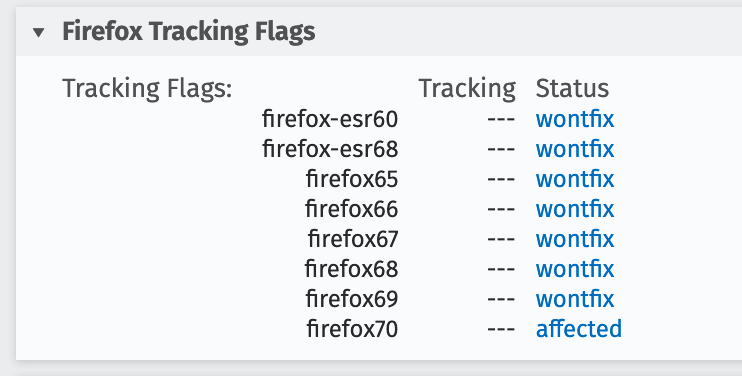 Project flags are used to supplement a bug's prioritization. These flags are defined at the product and component level and will not be present for all bugs. Most often they are used to establish when a bug is to be worked on during a multi-release spanning project.

In some bug tracking systems, to request information from someone about a bug, the bug is usually assigned to the person asked. In Bugzilla, we use needinfo flags.

The needinfo flag can be set at or after a bug's creation. When a needinfo flag is set, the person asked receives an email directing them to visit the bug, logging in if necessary, and answer the question.

To create a needinfo, you can specify the bug's assignee (if any,) the bug's triage owner (if one is defined,) the bug's reporter, or another user. Ask the question in a comment and set the needinfo flag before you save the bug.

Common uses of needinfo include:

Please respond to needinfo requests quickly to keep others from being blocked.

To clear a needinfo, go to the bug's page, respond to the question and save your comment. By default the clear this needinfo request checkbox is ticked.

If you need to route the request to another person, leave the clear this needinfo request checkbox ticked, and set a new needinfo for the person to which you want to send the question to, then save the bug.

All Bugzilla components are linked to a team.

The full list of teams is available at https://bugzilla.mozilla.org/rest/config/component_teams.

The full list of components linked to a specific team is available at https://bugzilla.mozilla.org/rest/config/component_teams/TEAM_NAME (replace TEAM_NAME with an actual team name).

When creating a new component, make sure to link it to the right team. If you are not sure, use the team the triage owner of the new component belongs to.

Adding a new team or changing an existing one

Make sure :marco is CCed so they can adjust the quality weekly reports. Needinfo :dveditz to adjust the weekly security report

Other Ways to use BMO and its Data

BMO can automatically send you buglists (or a group of people) at defined intervals. This requires that you have specific rights required to create whines.

I hear you want to integrate with BMO. Where to start, what to do next, and best practices which won't get you blocked.

BMO has a REST API that can perform most common tasks and is great for allowing external systems to integrate with Bugzilla. More details on how to use the API can be found here.

Trying to answer the "what should i do today" question? Go no further than the dashboards.

My Dashboard has some nice options for viewing lists of bugs that may be of interest to you.

If you would like to be able to change the status of bugs from UNCONFIRMED to NEW, you will need the canconfirm permission. It also allows you to file a bug as NEW rather than as UNCONFIRMED, which is the default for bugs filed by new users to bugzilla.mozilla.org.

The editbugs permission gives you the ability to edit most fields of a bug. It's very useful for adding good information to a bug, and for making summaries more clear and descriptive.

How to apply for upgraded permissions

If you want canconfirm, you can add it yourself using triage request form.

If you want editbugs, file a new bug, including:

Note: editbugs implies canconfirm there's no need to apply for both.

There are many other groups, some team-specific, some for security reasons, and some that are for corporate confidential bugs or comments. By default, everyone is in the BMO group everyone. Your permissions affect which shared searches you can see. When you create a saved search of your own, you can choose to share it with any group that are in.

You can see your current groups and permissions.

BMO is an abbreviation of bugzilla.mozilla.org. It is Mozilla's site-specific Bugzilla installation, which is a slight fork of the standard Bugzilla source (or "upstream") with many extensions. At the moment, the fork is technically from Bugzilla 4.2, but many features have been backported from 4.4 and master—in fact, many features in those branches were written by the BMO developers, who added them to upstream but also backported them so they could be immediately available to BMO users. Since we've backported most fixes and features that are of particular use in BMO, we haven't been strict about keeping up with the latest official upstream release. Another difference is that the BMO devs have not prioritized deployability in BMO, since fixes and features are just pushed out each week to the BMO installation, although they have made significant progress in making BMO more hackable.

In sum, the main difference between Bugzilla and BMO is that the former is the name of the general-purpose software, and the latter Mozilla's site-specific installation. An analogue is MediaWiki versus Wikipedia.