With the new Firefox release schedule we need to clarify how work on the KB should proceed. How do we prioritize our work, what should get localized and when, how should approvals work, when do we archive an article, etc. are some of the questions that need to be answered. I've outlined the basic mechanics around documentation below. That will help inform the policies which I'll draft as a single document and then use that to update our KB contributor documentation where necessary. 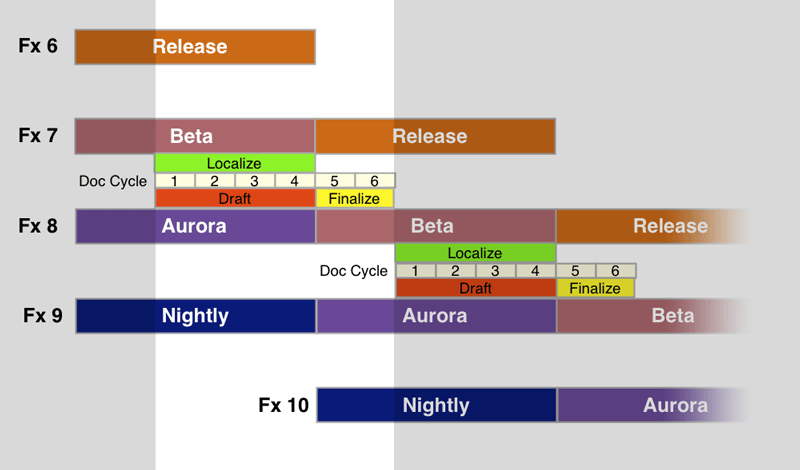 The Article Tracking page will be the central place for keeping up with what work is happening on knowledge base articles.

This rapid release cycle has some implications for how we use {for} in our articles. Also Firefox will move to a silent update model which will mean users (for the most part) are always running the current version of Firefox. Here are the changes to {for} behavior that will allow us to keep up:

In the future, if it's necessary, we may introduce a "less than" syntax: {for <fx6} which would mean "For Firefox less than 6" or "Firefox 5 or less." (This would make {for fx6} and {for <fx6} logical opposites.) This has been deemed unnecessary at this time.

To better support Windows XP and Vista/7, add two new operating systems, 'winxp' and 'win7'. The current 'win' would continue to mean "any windows version" while the new operating systems are hopefully obvious. ('win7' would have to mean Windows Vista or 7.) This doesn't mean we have to immediately update all articles with with separate XP and Win7 instructions. Current articles won't break. We should come up with a list of priority articles that would benefit the most from separate instructions and work them into our regular updates.

Additionally but not immediately, we'll add a site-wide warning to old, no-longer supported versions of the browser (for example, when 6 comes out we will start displaying the warning to users on 4).

As we release Firefox every six weeks the issues and items that users will need documentation for will change at a much faster rate. There will be a lot of articles (like troubleshooting crashes, or using bookmarks) that may never go away but there will others that become obsolete or not of concern for users. We should archive these article and focus on the most pressing issues. We should be able to document 99% of what users need in less than 200 articles (we currently have almost 400 English articles).

With this feature, we can move an article to the archive by clicking a checkbox on the admin interface. This will remove the article from all dashboards (including localization dashboards) and from the normal search. You can still see the article by using the advanced search, and of course links to the article would be preserved. However there will be a banner on top of the article making it clear that the article is no longer maintained and might be out of date.

Archiving an article is not a one-way street. Once an article is archived we will monitor the stats, to make sure that the article wasn't a popular one. In case we made a mistake it's as easy as clicking a checkbox to get the article back on the dashboards.

When an English article is being worked on actively, we don't have a good way to tell localizers when it's final and can be translated. Currently, every time it's edited and marked with the second or third revision levels, it shows up on their dashboards as needing to be updated. We need a way to mark and unmark an article as ready for localization so that we can reduce the noise on localization dashboards.

We should start using the discussion tab on each article. The idea is, you subscribe to notifications so you know which article are being talked about (similar to today minus the main article forum list). I’d propose that we use the KB Article Forum to discuss issues, thoughts, policies for articles in general plus proposals for new articles.

The main issue with moving to this workflow is that the vast majority of posts in these forums to date are support requests. So we have a few things to do before this is really viable:

In addition we should post a message in misplaced support request threads like we normally do along with a link to https://support.mozilla.com/questions/new and then we should delete the thread. I don't think there is any problem with deleting the threads as the original poster seems to get the message and doesn't post again in that thread.

We should make sure that articles are written to work without images or videos. I think both images and videos are important and greatly increase the helpfulness of an article but they can’t be mandatory. Localizers should feel free to use or delete them as they see fit.

Also, given how helpful screenshots and screencasts are, we need good documentation on creating them for contributors.