OUT OF DATE WARNING

This page is outdated since beginning of July 2011 when the Automation Services team has been formed. Check its team page for further details.

Mozmill is a test tool to run functional tests in an automated manner. It can be used by applications which are based on the Gecko platform or XulRunner.

Mozilla QA is using Mozmill to automate existing manual tests which were added to Litmus and folded into different testgroups, like Smoketests, Basic Functional Tests (BFT), and Full Funcional Tests (FFT). The primary goal is to lower the active testing time for any of our QA engineers and contributors. As a result we will be able to cover more than only one platform and locale for BFT testing. To get a better impression of the enhancements just compare those raw numbers: To run all the BFT tests manually it takes about one man day while running all the tests on every platform in parallel will eventually take about 40 minutes with Mozmill!

Given the number of new features and regression fixes for any new Firefox major or security release, we will continuously enhance our functional testing framework by adding more tests of any type, increasing the number of platforms and locale builds to run the tests on, and by making the analysis of test reports more user friendly. 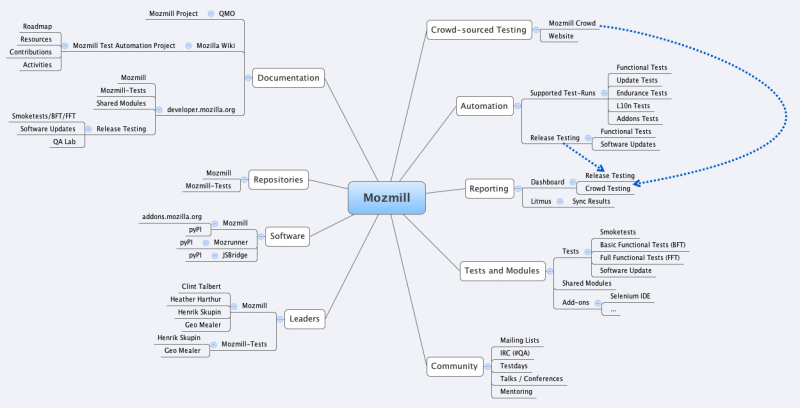 You can also get in contact with us by subscribing to the mozmill-dev list on Google or by joining the #mozmill channel on IRC.

You can subscribe to the Google calendar (ical) to see our events, milestones, and other deliverable dates.

We have a bi-weekly public team project meeting. If you want to join the meetings, please check the meeting page for details.

The QA Test Automation team has a couple of ongoing projects. Priorities for each of those will be re-defined at the beginning of each quarter.

As you can imagine a project like Mozmill automation has a couple of areas where work is happening or at least planned for the future. The following chapter will give you a good overview about all of our projects.

Each of the above mentioned sub-projects needs love from someone with passion to work on such a challenging task. There will be a project lead who will offer help in various ways.

If you are interested in helping us to push Mozmill a big step forward, please get in contact with Henrik Skupin. We will figure out what's the best way for your contribution.

Joining an existing project can be hard especially when you see all the stuff in the mind map. To give you a handy guide for the first steps a rich documentation has been created. It covers the following areas:

All those documents should bring you into a state to be able to play around with Mozmill. At least by running those tests against nightly or release builds of Firefox and reporting failed tests would be a great help for us.

There are a couple of resources which are related to Mozmill. A nearly complete list you will find below: